All locations remain closed. Curbside pickup is available. Online resources are available in our Digital Library, 24/7.
Catalog My Account

Life & Limb: The Toll of the Civil War & Long Lasting Effects on Victims 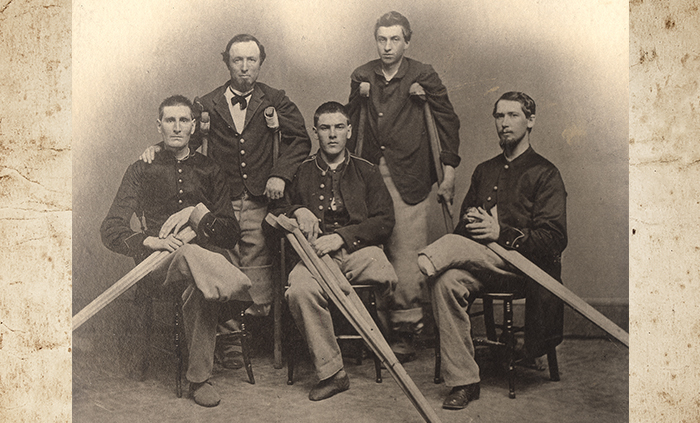 Photo courtesy of the National Library of Medicine

Life and Limb: The Toll of the Civil War

Life and Limb: The Toll of the Civil War is an exhibit that explores the experiences of disabled Civil War veterans who served as a symbol of the fractured nation and a stark reminder of the costs of the conflict.

The perspectives of surgeons, physicians, and nurses are richly documented in the history of Civil War medicine, which highlights the heroism and brutality of battlefield operations and the challenges of caring for the wounded during wartime. Yet the experiences of injured soldiers during the conflict and in the years afterwards are less well known.

More than three million soldiers fought in the war from 1861–1865. More than half a million died, and almost as many were wounded but survived. Hundreds of thousands were permanently disabled by battlefield injuries or surgery, which saved lives by sacrificing limbs. As Americans sought to put the memory of the conflict behind them, they increasingly ignored the plight of aging, disabled, and impoverished veterans.

This exhibition was developed and produced by the National Library of Medicine, National Institutes of Health.

Observe Union Army personnel in a brigade field hospital with the Army of the Potomac. They discuss what has been seen and learned about medicine since the spring of 1861: their experiences dealing with battlefield medicine, the assistance of the civilian community, and the prognoses for the quality of life after the war of the wounded and sick. The presentation and a question and answer session are led by members of the Washington Civil War Association.

Hear the crash and boom of the artillery. Watch as battles are reenacted. Feel the weight of the rifles and packs that the soldiers carried. Meet the women of the civil war, attired in dresses from the time period. Both the North and South will be in attendance.

This Civil War reenactment is produced and performed in association with The Washington Civil War Association. For admission prices and to learn more, visit www.spokanecivilwar.com.