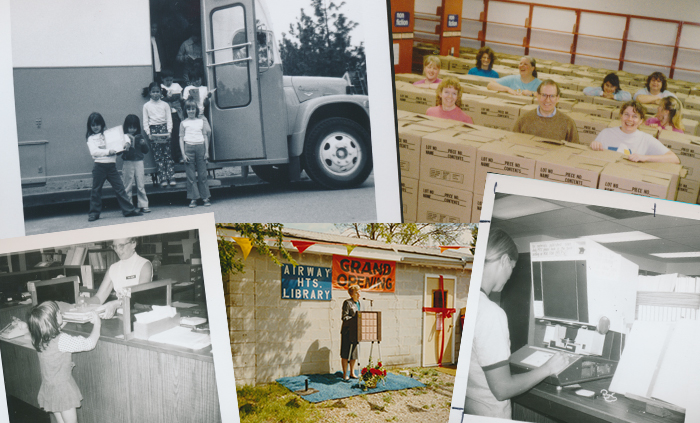 Spokane County Library District is commemorating its 75th anniversary this year. We’re celebrating this fall! We’ve collected stories and poems from local writers to create a community anthology, coming out in November. We have two musical celebrations at our libraries: in October, Unstrung featuring cellist Karen Hawkins and violinist Lori DeGuire and in Novermber, a celebration featuring Hot Club of Spokane.

In our latest issue of Engage, our programs and events guide, we took a stroll down memory lane, looking at newspaper articles and photographs of our libraries and programs over the years. It’s been fascinating to see what has changed and what has stayed the same.

There are an amazing number of library programs that are popular today that have been popular throughout the 75 years the library has been engaging with our community. This made me start to wonder if there were books published the year the library was established that are still in our collection today. I found several still being checked out and read 75 years after first publication. Of course, our copies aren’t 75 years old! 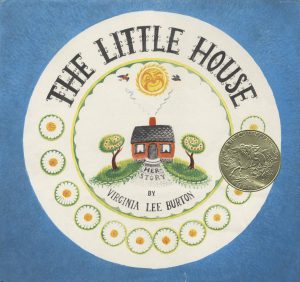 What I first noticed in my quest to discover books published in 1942 was that this was a great year for children’s books. Several classic picture books made their debut the same year as the library. The Runaway Bunny, by Margaret Wise Brown, is one of the most recognized picture books and has truly stood the test of time. Since the book was first published in 1942, it has never been out of print. Another well-recognized title is Caldecott winner The Little House, by Virginia Lee Burton. And for those who grew up with the Little Golden Books, you’ll remember The Poky Little Puppy, by Janette Sebring Lowrey. 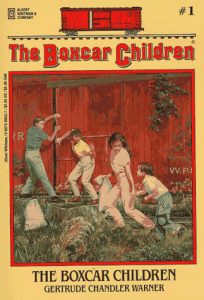 Older children were also enjoying some well-known and enduring books. Children reading chapter books were busy solving mysteries with the charming and independent Nancy Drew and the adventurous, amateur detectives the Hardy Boys. 1942 brought the 19th book in the Nancy Drew series (The Quest of the Missing Map) and the 21st in the Hardy Boys Mysteries (The Clue of the Broken Blade). Both the Nancy Drew and Hardy Boys series were written by many different ghost authors. The Nancy Drew series was published under the pseudonym Carolyn Keene and The Hardy Boys were published under the pseudonym Franklin W. Dixon. 1942 was also the year The Boxcar Children, the first book in the series by the same name, was published by Gertrude Chandler Warner. 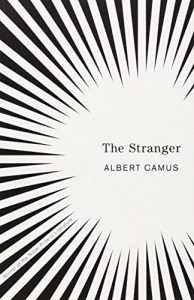 While children were busy solving mysteries, adults were flexing their philosophical muscles with French author Albert Camus’ The Stranger. This book sparked conversation from the moment it was first published in France in 1942. C.S. Lewis was another author writing during this time period and his theological satire The Screwtape Letters debuted in 1942 and went on to sell millions of copies worldwide.

Several other famous authors were busy publishing books during this time period including John Steinbeck, Pearl S. Buck, William Faulkner, and Agatha Christie (adults enjoy mysteries too!). For a trip back in time (give or take a few years from 1942), you can check out titles by these authors who wrote in the same era and have endured in popularity for 75 years and more.

I hope you enjoyed this literary trip to 1942, the year that Spokane County Library District got its start. My colleagues in Collection Services, Cheryl and Sheri, compiled booklists of top books in adult and youth for the past 75 years. See how many you’ve read and share your favorites with us.

1942: The Stranger by Albert Camus

1943: The Fountainhead by Ayn Rand

1946: The Common Sense Book of Baby and Child Care by Dr. Benjamin Spock

1947: Tales of the South Pacific by James Michener

1948: The Naked and the Dead by Normal Mailer

1950: The Martian Chronicles by Ray Bradbury

1960: To Kill a Mockingbird by Harper Lee

1962: One Who Flew Over the Cuckoo’s Nest by Ken Kesey

1963: The Feminine Mystique by Betty Friedan

1965: The Autobiography of Malcolm X by Alex Haley & Malcom X

1966: Valley of the Dolls by Jacqueline Susann

1971: The Exorcist by William Peter Blatty

1979: Hitchhiker’s Guide to The Galaxy by Douglas Adams

1981: The One Minute Manager by Kenneth H. Blanchard

1982: The Color Purple by Alice Walker

1983: Son: A Psychopath and His Victims by Jack Olsen

1986: Codependent No More: How to Stop Controlling Others and Start Caring for Yourself by Melody Beattie

1988: The Satanic Verses by Salman Rushdie

1993: The Celestine Prophecy by James Redfield

1994: One for the Money by Janet Evanovich

1997: Tuesdays with Morrie by Mitch Albom

1998: The Poisonwood Bible by Barbara Kingsolver

1999: A Walk to Remember by Nicholas Sparks

2000: The Tipping Point: How Little Things Can Make A Big Difference by Malcolm Gladwell

2001: Getting Things Done: The Art of Stress-Free Productivity by David Allen

2002: The Lovely Bones by Alice Sebold

2004: My Sister’s Keeper by Jodi Picoult

2005: The Girl with the Dragon Tattoo by Stieg Larsson

2009: The Help by Kathryn Stockett

2010: The Immortal Life of Henrietta Lacks by Rebecca Skloot

2012: Wild: From Lost to Found on the Pacific Crest Trail by Cheryl Strayed

2013: Lean In: Women, Work, and the Will to Lead by Sheryl Sandberg

2014: All the Light We Cannot See by Anthony Doerr

2015: Girl on the Train by Paula Hawkins

2017: You Don’t Have to Say You Love Me by Sherman Alexie

1943: A Tree Grows in Brooklyn by Betty Smith

1944: The Hundred Dresses by Eleanor Estes

1953: Little House on the Prairie by Laura Ingalls Wilder

1955: Harold and the Purple Crayon by Crockett Johnson

1958: The Witch of Blackbird Pond by Elizabeth George Speare

1959: The Rescuers by Margery Sharp

1960: Island of the Blue Dolphins by Scott O’Dell

1961: The Phantom Tollbooth by Norton Juster

1964: Harriet the Spy by Louise Fitzhugh

1965: The Black Cauldron by Lloyd Alexander

1968: Ramona the Pest by Beverly Cleary

1972: Julie of the Wolves by Jean Craighead George

1973: How to Eat Fried Worms by Thomas Rockwell

1974: Where the Sidewalk Ends by Shel Silverstein

1977: Bridge to Terabithia by Katherine Patterson

1978: The Westing Game by Ellen Rankin

1990: The True Confessions of Charlotte Doyle by Avi

1992: The Stinky Cheese Man and Other Fairly Stinky Tales by Jon Scieszka

1995: The Watsons Go to Birmingham, 1963 by Christopher Paul Curtis

1996: The Midwife’s Apprentice by Karen Cushman

1997: Harry Potter and the Sorcerer’s Stone by J.K. Rowling

1999: The Bad Beginning by Lemony Snicket

2001: The Sisterhood of the Traveling Pants by Ann Brashares

2003: Don’t Let the Pigeon Drive the Bus by Mo Willems

2004: Al Capone Does My Shirts by Gennifer Choldenko

2005: The Lightning Thief by Rick Riordan

2008: The Graveyard Book by Neil Gaiman

2009: Where the Mountain Meets the Moon by Grace Lin

2013: Eleanor and Park by Rainbow Rowell