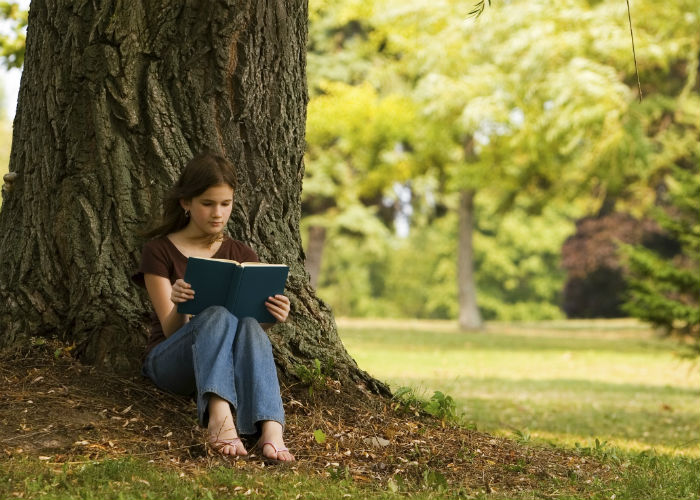 In my position as a librarian, I see a lot of voracious readers from preschoolers to senior citizens. With all of those bookworms, I particularly love when a tween comes in looking for something new. Tweens can be insatiable readers but at this age, right around 9 to 12 years old, picking out books becomes a little trickier. Desired titles may be edging towards the higher end of the children’s section as stories become more dynamic, language more complex, and subjects more intense, but not quite reaching into the teen section just yet.

On top of all of that, tweens themselves know exactly what they like—and what they don’t—and aren’t afraid to let you know. So in a bid to find some new(ish) books for the discerning tween reader, I let a number of classic and fan favorites inspire my search to find what else is lurking out there just waiting to be read.

The Worst Class Trip Ever

Wyatt and his friends encounter humor, mystery, and a ton of trouble during their class trip to Washington, D.C. These eighth graders are convinced the passengers behind them on the flight over are definitely terrorists—maybe they are or perhaps not. After taking a mysterious device from the men, Wyatt and his classmates spend their trip sneaking away from teachers, evading capture, and trying to figure out just what is going on. In a perfect world, Wyatt would solve the mystery, save the President, and win the love of the girl, but he’d settle for just making it home without being expelled.

For fans of: Middle School series by James Patterson and Chris Tebetts, Chomp by Carl Hiaasen

The League of Beastly Dreadfuls

When her parents die in a tragic vacuum cleaner incident, perfectly ordinary Anastasia is sent to live at a former asylum with her entirely abnormal great aunts, Prim and Prude. It’s not too long before Anastasia discovers two mysterious brothers wandering the halls and begins to question just who her aunts really are. Teaming up with the two boys, they form the League of Beastly Dreadfuls to plan their escape.

For fans of: A Series of Unfortunate Events by Lemony Snicket, Matilda by Roald Dahl

Lost in the Sun

Trent is a bundle of guilt and rage. After accidentally causing the death of a teammate during a hockey game, he’s convinced that everyone hates him and panics at the thought of playing another sport. His home life isn’t any better as he struggles with his parents’ divorce and feels like his father prefers his brother to him. As Trent lashes out at his family, friends, and teachers, life continues to grow bleaker, until he encounters Fallon, a mysterious girl with secrets of her own and a stubborn, unyielding personality.

For fans of: Okay for Now by Gary Schmidt, The Question of Miracles by Elana Arnold

The city of Bryre suffers under the magic of an evil wizard. Because of his curse, girls sicken and disappear without a trace, and everyone lives in fear. No one is allowed outside after dark. Night is when Kymera, a Frankenstein-like hybrid, goes to the city with a cloak disguising her wings, the bolts in her neck, and her spiky tail. Her mission is to rescue the girls of Bryre. Despite Kymera’s caution in going secretively, a boy named Ren sees and befriends her, but what he knows will change her world forever.

For fans of: Coraline by Neil Gaiman, Beastkeeper by Cat Hellisen

The Island of Dr. Libris

Billy is not happy at the idea of spending the summer at the isolated cabin of a boring professor his mother works with. With no TV or internet, the neighborhood bully breathing down his neck, and his parents’ likely divorce looming, Billy is all too happy to see what the absent Dr. Libris is hiding in his locked library. When Billy discovers Hercules, Robin Hood, and Tom Sawyer roaming the island, he soon discovers that these aren’t your average tales. As the characters begin to take on lives of their own (and start getting into trouble and mischief beyond their stories), Billy must find a way to solve this growing problem.

For fans of: Escape from Mr. Lemoncello’s Library by Chris Grabenstein, The Land of Stories series by Chris Colfer

In this tale of Alice in Wonderland meets The Wizard of Oz, 12-year-old September finds herself traveling to Fairyland from her home in Omaha to retrieve a missing talisman at the request of the Green Wind. She soon sets off on her quest with the careful warning not to disobey any of the fickle Marquess’ rules; otherwise, she might find herself ticketed or executed—it just depends on the Marquess’ mood. When the Marquess takes her friends hostage, September must sacrifice everything to recover a magical sword from the dangerous Worsted Wood.

For fans of: The Sisters Grimm series by Michael Buckley, Peter and the Starcatchers series by Dave Barry and Ridley Pearson

Young Roan’s dream is to attend the Pilot Academy like his grandfather, father, and older brother before him. But just as Roan’s application to the academy has been rejected, he finds himself invited to study under Master Yoda himself at the Coruscant Jedi Academy. Struggling to keep up with all of the younger students, Roan details his new friendships, run-ins with bullies, class pranks and more in his regular journal entries. The newest book in this series, The Phantom Bully, came out in June.

For fans of: Origami Yoda series by Tom Angleberger, Diary of a Wimpy Kid series by Jeff Kinney