A Bit of Wizardry

Picture this: one moment you’re walking through a normal theme park, passing lines of people, restaurants and roller coasters. But as you walk deeper into the park, you notice that the buildings around you start to change in character. Suddenly, you’re somewhere which looks a lot like London (albeit against a Florida sky). You see King’s Cross Station looming up before you and just past it, there’s a brick vestibule, quite ordinary, really. You decide to see what’s inside it. 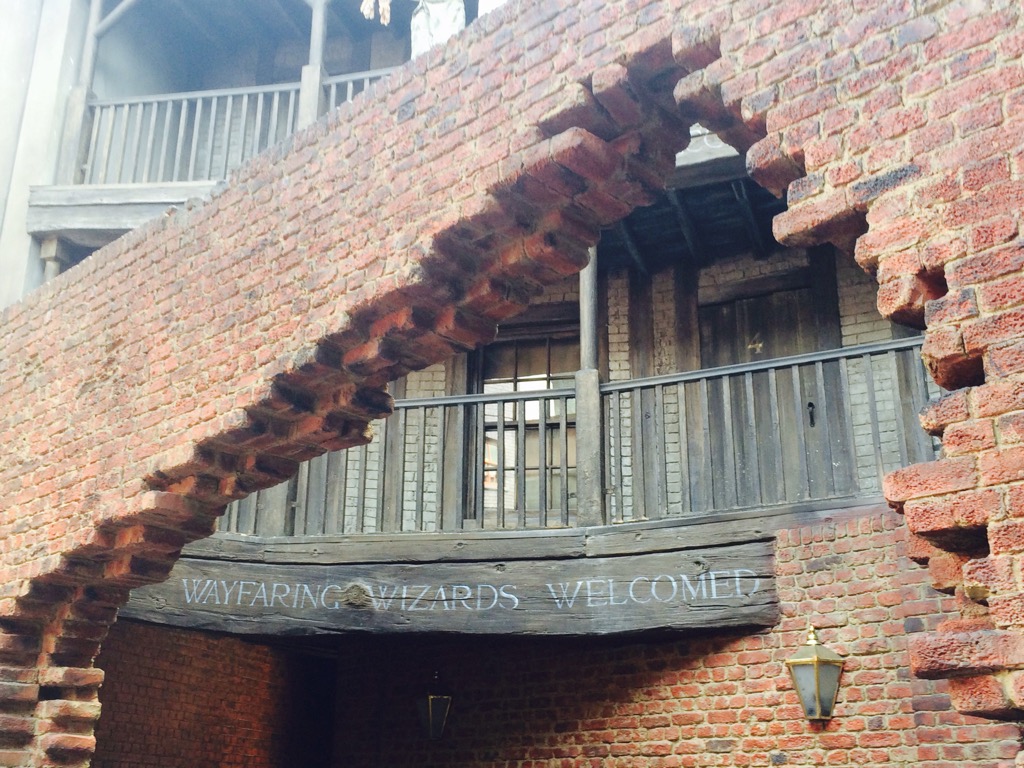 You hear the sound of bricks rearranging as you walk through the passage. When you emerge, your eyes are greeted by a wholly unexpected sight. In front of you is a street, paved with cobblestones. Although it seems vaguely British, a closer look reveals rather unusual shops, people with tall hats, wands and robes. You catch sight of Olivander’s wand shop, and at the end of the street, Gringott’s bank, topped with a large (angry-looking) dragon.

You pinch yourself before continuing. You are in Diagon Alley. 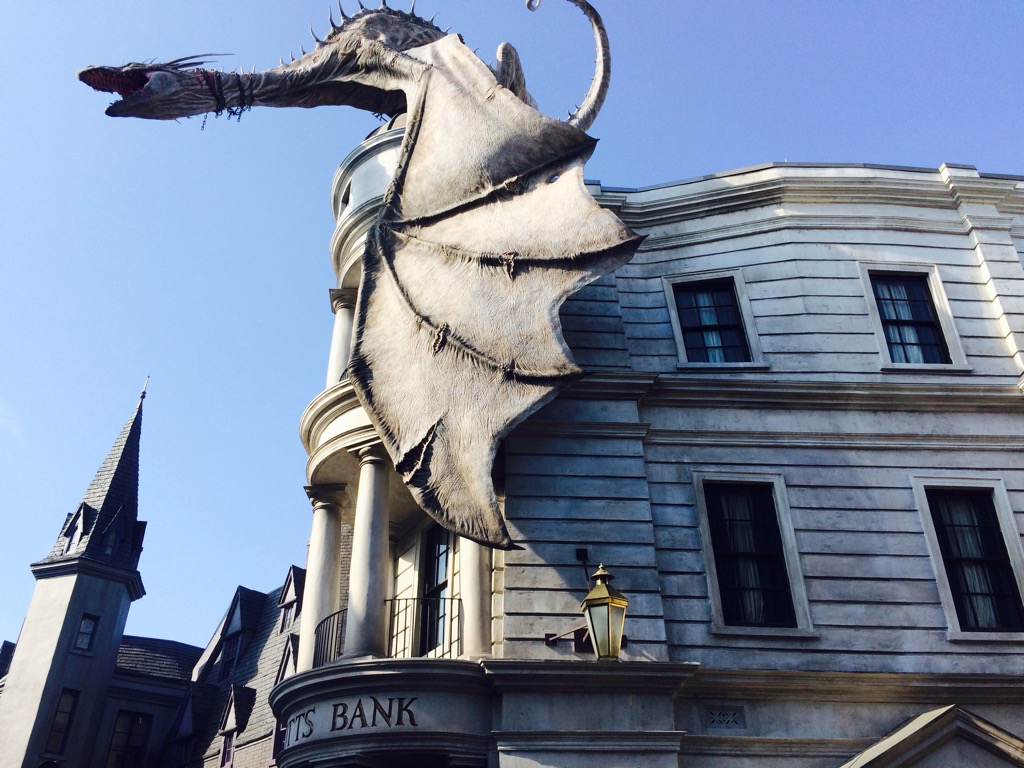 Just before Christmas, my brother and I (both long-time Harry Potter fans) took a trip to Orlando for the chance to walk into these beloved books. I was a little nervous that the experience wouldn’t live up to my expectations, that it would fall flat somehow, or not be enough. But it didn’t. I loved every moment of my time there, and would recommend a similar trip to any Harry Potter fan. (If you want to get started planning your own trip, you might want to check out these library resources for Universal Studios Orlando).

Here are a few of my highlights.

Our first stop was at Gringotts’s for some money. As soon as I saw the first movie, years ago, I knew that Gringott’s was a great candidate for a ride. The bank is perhaps the crowning achievement of Diagon Alley (which opened in the summer of 2014). We walked through the lobby of the bank, past the goblins tallying up their accounts, under the glittering chandeliers, and embarked on a whirlwind ride through the depths of the bank (with some familiar faces along the way).

After the ride, we stopped to get some Gringott’s money (and chat with a goblin). While muggle money is accepted all through the park, it was fun to use Gringott’s notes to pay for things like gillywater and pumpkin juice.

Next, we headed to Olivander’s to (hopefully) be chosen by a wand. You can go right in and purchase the wand of your choice, of course, but you can also go and see the wandkeeper. Once there, one person from the group is chosen, goes through a couple of wands that are clearly not the right fit, and finally lands on just the right one. 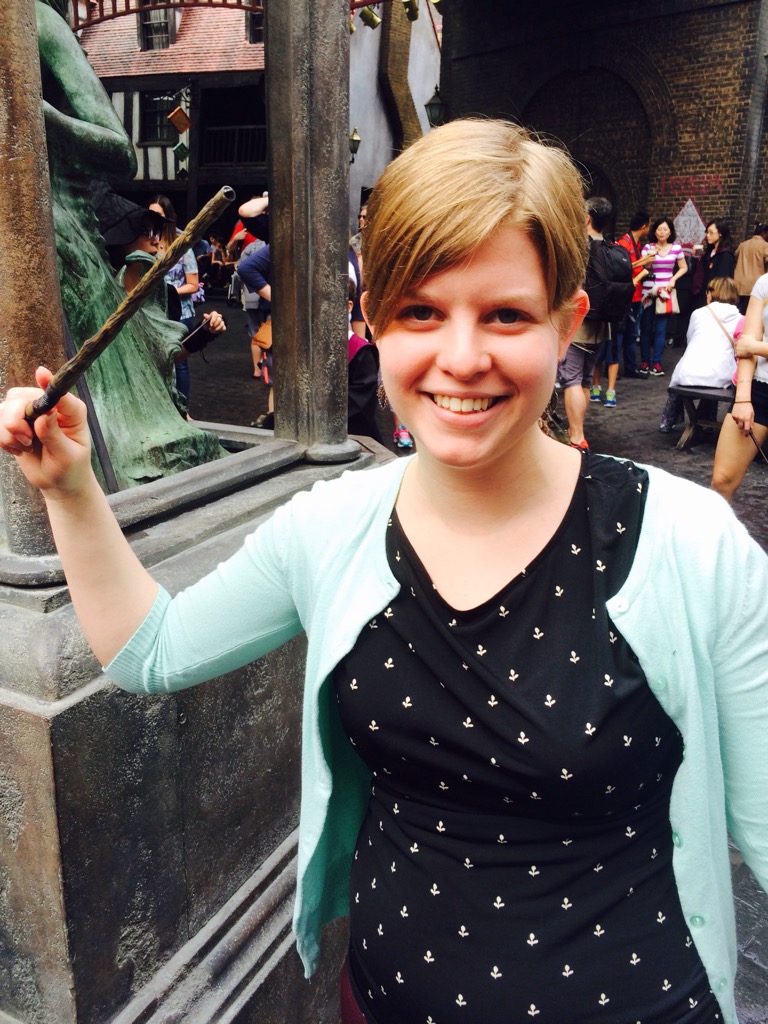 I am not embarrassed to say that the experience was so magical that I felt the need to go through the process somewhere between eight and twelve times, over a 2-day period, in order to finally be chosen by my wand. It was, without question, worth it.

After I had my wand, a whole new wizarding world opened up to me as I searched for places to do magic (while the interactive wand price tag is a little steeper than the reproductions of famous witch and wizard wands, I found the ability to cast spells around both parks well worth the additional amount).

I would wave my wand in front of a shop window, while saying Windgardium Leviosa, and the feather quill would rise slowly. I was completely delighted with the whole experience, and performed most of the spells at least twice.

After we’d stocked up on wizard essentials, (and made a quick stop in Knockturn Alley, we boarded the train for Hogwarts. First, we walked through a very convincing London Underground station before slipping between platforms 9 and 10 and onto Platform 9 and 3/4. It’s hard to capture the way I felt as I watched the train arrive at the station, even harder to describe my elation as we set off on our journey. I don’t want to spoil the ride for you, so I’ll simply say that it was beautifully done, and, like the rest of the trip, left me wanting more. 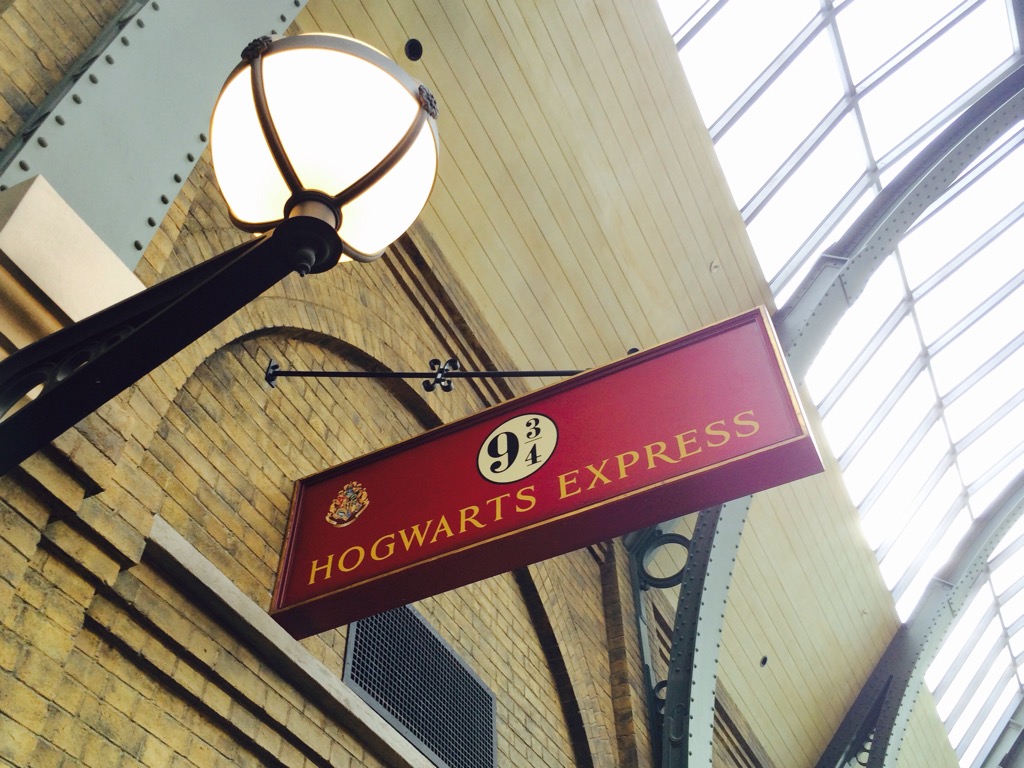 We arrived at Hogsmeade, the original Wizarding World, and found snow on the roofs of the shops and houses. Just in case London isn’t your scene, there’s another Olivander’s in Hogsmeade (with more opportunities for your wand to choose you).

Our first stop, however, was obvious as soon as we entered the village. Honeyduke’s was right in front of us with giant Bertie Bott’s Every Flavour Beans and Chocolate Frogs in the window. The interior was filled with even more sweet treats from the movies and books.

By this time, we were getting hungry, so we stopped by the Three Broomsticks for a late lunch. We feasted on traditional pub food such as shepherd’s pie and Guinness stew, and sampled both pumpkin juice and Butterbeer (the cold version). As with all the other areas of the parks, it was all in the details in the pub. We found ourselves constantly looking up and marveling at all the special touches.

After lunch, we prepared to enter Hogwarts, with all of its mysterious delights. I don’t want to spoil this for you (as if that’s possible) so I’ll just tell you that even if you have a ticket which allows you to bypass the line, don’t do it on this one. The line itself is a huge part of the ride, filled with all sorts of treasures from the books and movies.

The ride itself is awfully fun (and contains some familiar faces). We fly a bit through a Quidditch match, and all around the castle (which made my stomach drop a time or two, truth be told). This attraction is unmissable.

After the ride was over, we stopped to take a picture with the castle in the background. It’s beautiful (and while it’s pretty amazing all the time, it’s even more magical at night).

There are two roller coasters (or three, depending on how you look at it). To keep chronological, we started with the Flight of the Hippogriff, which is fairly gentle, and includes sightings of Hagrid’s hut and Buckbeak. The second roller coaster represents the Tri-Wizard Challenge (another one to linger for pictures in line). Your coaster is a dragon, and you can choose from two different ones for a slightly different experience. This is a truly great roller coaster, apart from any Harry Potter qualifiers.

After we’d poked around Hogsmeade a bit more, it was time to board the train back to London (and another lovely meal at The Leaky Cauldron).

The trip back was bittersweet, as the ends of the movies and books always are. We spent our last bit of time (after a delicious hot Butterbeer), casting spells and saying goodbye, soaking in the music and the atmosphere that made it all feel so real.

I’d be back there in an instant if I could only figure out how to apparate.