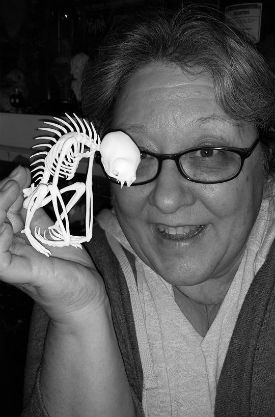 What do Sasquatch, wild dogs, dinosaur babies, ghosts, and alien visitors all have in common? Besides being intrinsically awesome, they’ve all been book subjects for local writer Kelly Milner Halls. Halls is a passionate profiler of the wonderfully weird, with nonfiction titles like Tales of the Cryptids, Ghostly Evidence, and Wild Horses: Galloping Through Time. She’s also a fantastic presenter, having done engaging and lively programs for everyone from summer reading participants at Spokane County Library District to school children in Beijing, China during a two-week visit last winter.

Kelly’s love of a great, true story inspired Blazing Courage, her debut fiction book and the first title in the new Animal Rescues series from Darby Creek. The next two titles, Dive into Danger and Champion in China, are due out in spring and fall 2016, respectively. Blazing Courage was positively reviewed by Kirkus Reviews, which said, “Halls writes in a brisk, competent style. The story wraps up satisfyingly, with a bit of a twist. Uncomplicated reading done well.” The story of a fourteen-year-old girl who ends up adopting an unbroken, four-year-old mare when she attends a horse auction with the stable manager, Blazing Courage is designed to appeal to reluctant readers but also offers compelling reading for horse lovers, fans of great storytelling, and readers of all levels. Dive into Danger is about a swimming-phobic World of Warcraft player who helps his dad rescue a whale. Champion in China—inspired by both her visit to Beijing and the real-life story of an animal activist who saved 580 dogs en route to slaughter—is the tale of Isaac, a Hoopfest fan from Spokane who relocates to Beijing with his family and finds himself saving lost and stolen animals from the illegal dog food trade.

Kelly took time out from her busy schedule to answer some questions for us about the new series, writing for reluctant readers, and her upcoming projects (yay, tardigrades!).

You are most well-known for your nonfiction. How did the Animal Rescues series come about? Did it start as a series?

My animal rescue stories for National Geographic had done so well, I queried editor Andrew Karre with the concept of animal rescue books for teens. He asked for a proposal so I suggested six ideas. He got the green light to publish three. When I told him the research was going well, he asked me if I had considered fictionalizing the stories. I reminded him I wrote primarily nonfiction, but he challenged me to do short novels anyway and I accepted the challenge, temporarily frozen in fear. 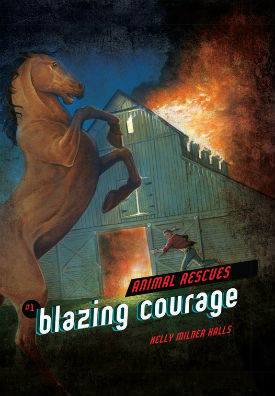 You adopted a wild mustang when you were only 12 and trained it to be a gymkhana competitor. Was the auction process then similar to what Annie goes through to adopt Poco in the book?

The auction was similar, but my stable manager went without me and came home with a little buckskin mustang I named Little Bit because she was small like I was. I have seen other auctions, though. Had I been allowed to join him, I’d have been chasing a grizzled old cowboy just as Annie was. That character was absolutely based on him.

What was it like to write in a new genre? Did it come instinctively or was there a bit of a learning curve?

I’d previously written three YA short stories—all reasonably well received—and Andrew had read at least two of those. So I had a hunger to write fiction but no real confidence. Taking the leap of faith required me to find that confidence, and quickly. That’s why I said yes. It was a blind faith, but I’m glad I took the chance. Early reviews have been good, but I really hope kids like the books. That’s my primary test.

I love that there’s a strong emphasis on diversity in the series, and that the books are designed to be especially appealing to reluctant readers. Could you talk about that a little bit more? And are there future “Animal Rescues” books in the works?

I was a reluctant reader as a kid. I was a pretty good reader, but I felt the stories offered me very little. So my whole career has catered to kids like me. I try to write books even reluctant readers can feel confident undertaking. The short novel format is ideal for those kids learning to become stronger readers. And I try to write characters that appeal to kids a little outside the lines. That was the kind of kid I was, so that’s the type of kid I write for.

I’ve seen you present to huge roomfuls of kids and you have such a gift for being entertaining, informative, and warm. What’s your secret to working with and writing for this age group (7-15)?

I love the kids. It’s really that simple. I think some people write for kids out of a sense of needing to teach or direct them, and that’s noble, but that’s not what drives me. I write for kids because I really like and respect them. I think like they do in so many ways. I like the things they like. I laugh at the jokes they tell. I wonder at the weird, unexpected, and strange the same way they do. I’m 57, nearly 58, so technically I’m old. But I delight in the same things my readers enjoy, so I’m perfect for writing their books. I bring an adult’s sensibilities to the research, expert interviews and craft of writing, but I never forget who I want to reach. I try to ask what I think kids would want me to ask, not just what will win industry awards.

Do you have any new nonfiction books in the works?

Yes, I am working on several. One is on the history of ventriloquism and another is about the toughest creature on the planet Earth, the tardigrade. I’m also working on books about African wild dogs and the history of video games.

What advice would you give a writer just starting out, particularly anyone who might be interested in writing for kids?

Reach within yourself to reconnect with that kid you were or better still, the kid they never let you be. Dust that kid off, have a talk with him or her, and let that inner voice tell you what projects to pursue and how to pursue them. That very practice has made my life as a children’s writer an absolute joy. I wish the same for all others. Have fun in your pursuits, and you’ll inspire others to do the same.