Confession time: I love cookbooks, craft ideas, DIY blogs, and all things creative; I read them like they’re Pulitzer-worthy novels. In the last couple of years however, Pinterest has taken that love to a new level.

At any given time, I‘m working on two to three projects and have half a dozen ingredients for new recipes waiting in my fridge. Someday I might put away my fabric scissors, toss my trusty whisk, and quit Pinterest cold-turkey, but probably not any time soon. If I’m honest with myself though, I’ll probably end up being that crazy great-aunt who gives everybody oddly shaped, hand-knitted socks for Christmas.

I’m not the only one who’s had their DIY addiction enabled by Pinterest, though. People who’ve never stepped foot in a kitchen, who have no idea where the nearest Home Depot is, and couldn’t tell the difference between Jo-Ann’s and Michaels are jumping on board. For those people, I’ve found there’s a lot information about starting your own Pinterest account or using the site in general. Pinterest for Dummies is a great place to start for that kind of info, and we’ll even be offering two classes on the topic in a couple of months, too. You can register for the December 14th class here, and December 21st here.

There’s not, however, any one place that will tell you what mistakes most new Pinterest users will make when trying to complete a DIY Pin, be it a recipe, craft, or sewing project. And most people will make a mistake or two along the way.

Even coming into Pinterest with a fair bit of crafting and baking background, I’ve screwed up my fair share of Pins. So while I applaud anyone’s desire to take up the DIY mantle, I’m also happy to share a few things I’ve learned along the way that will hopefully help you as well.

Even if a project looks simple, or like it may only have a few steps, a picture is rarely enough. One of my favorite blogs, Pinstrosity, which showcases truly spectacular Pinterest fails, lists “working off a picture” as their top issue among submissions. Sometimes a project is a lot trickier than it looks, and other times the issue is something like knowing that you need a particular type of glue or that the recipe won’t work at high altitudes. You can’t know this without those all-important instructions and sometimes finding them can be tricky. I’ve found Pins that link to Etsy items for sale, photos someone took of their own projects, and recipes with a photo that links to another site entirely.

If you run into something like this, try doing a Google Image Search of the photo. Look for results that don’t have Pinterest in the URL, otherwise you’ll likely encounter another copy of the Pin you’ve already found.

When I do a Google image search for Pinterest DIYs, I usually do a reverse search using the image provided on the pin. I save it to my computer, and then upload the picture to Google directly (if you click on the little camera icon on the Google image search page, it will give you the option to upload it or copy and paste an image URL). It then searches for the image or others visually similar to it, and will also sometimes give you suggested search terms as well.

It doesn’t always take you directly there, but if you don’t mind clicking through a couple of pages, you can often find the original post, or some useful information about it anyway. It’s kind of like Pinterest sleuthing (perhaps I’ll have to DIY myself a Sherlock Holmes style hat!).

If that doesn’t work, or you find the item is for sale or doesn’t have instructions at all, you might try a broader search for related items. Even if they come from another source, a search for “pineapple mango salsa recipe” or “Animal silhouette canvas” might find you someone who has tried (and provided details) on a similar project or recipe. Once you’ve found instructions though, make sure you delete or edit your Pin so the link goes to the right place in the future. You’ll save yourself a bunch of time if you decide to make it again, and you’ll be helping anyone who finds your Pin and wants to try it themselves.

A key example of not using instructions. The picture looked so simple that I jumped right in. It came out great…until it started peeling off the fabric three days later! Sadly, in the end I was left with scraps.

Once you have the directions, read them! Read them and follow them as close as you can, at least the first time. Don’t just assume you know what to do, based on past projects or an ingredients/supply list and a picture. It may seem easy enough, but many recipes and projects have an extra step or two that have to be followed for success. I once baked three batches of a new cookie recipe before realizing that skipping the extra step in the middle (where I should have started with an frozen cookie sheet), was the reason my cookies kept coming out flat as a sheet of paper. Once you’ve tried the Pin a couple times (whether a craft or a recipe), you’ll have a better idea of where you can deviate from the instructions and remain successful.

If you truly have to change up a recipe or craft, look around for instructions that match your desired outcome. Maybe you’re looking for baked mozzarella sticks, but you really like the look of a recipe that calls for frying them. Find a few recipes that bake them and see if they can be tweaked to include the ingredients you’re looking at.

If it’s a more crafty project and you can’t find a specific supply you need, do a little digging to find something that will work similarly. Your project may turn out a little different from the original Pin, but if you do your homework properly, you’ll have a better chance of coming out of it with something great.

A lot of Pins lead to blog posts, and the comments section on those posts can be a valuable resource, especially if it involves a new skill or something you’re unfamiliar with. Sure, you’ll see a lot of comments like, “Wow! This looks great!” or “Looks wonderful, I can’t wait to try it,” that aren’t particularly helpful. But a lot of comments have really helpful tips, things like clarifying instructions or questions about how to find an odd ingredient for example. You’ll also sometimes find people who’ve tried the project or recipe and discovered some useful tips they want to share. A recent project of mine involved copious amounts of wood stain and, had some helpful person not reminded everyone to wear rubber gloves, my fingernails would probably still be a really odd shade of mahogany!

A new feature of Pinterest also allows you to ask a question to the Pinterest community at large. While it won’t necessarily go to the original Pinner, it will go to a wide range of people who may be able to answer your question. Anyone can answer the question though, so try to get a few responses before you jump into it. 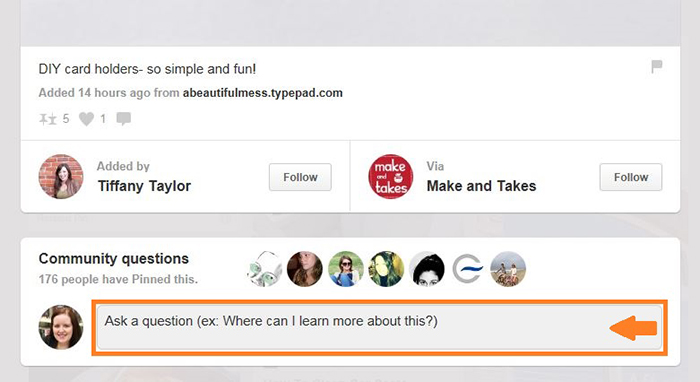 Failure is part of the process, but using these tips, I’m hoping that you’ll avoid it whenever possible. While some Pins might still be outside your reach, with a little digging and attention to detail, you should be able to come up with some great things. I should also mention that I pass no judgment on those whose projects have failed, as I’ve neglected my own rules before resulting in several amazing failures of my own! I’ve overflowed sticky buns (catching the oven on fire in the process); I’ve ruined more shirts than I can count with paint/stain/oil/etc.; and I’ve even had things come crashing down off my walls at 3 am (scaring me half to death in the process).

Got any good Pinterest tips or tricks to share? Or maybe an amazing Pinstrosity of your own?