Behind the Scenes at the Youth Media Awards 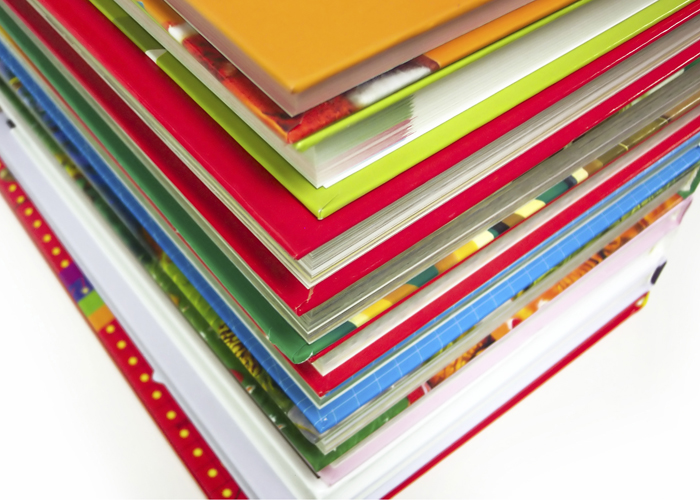 Mondays are not normally my thing. But there’s one Monday that occurs around this time every year that I anticipate with the kind of nerdy fervor that other people reserve for, say, the World Series. I’m talking about the Youth Media Awards (or YMAs, as we librarians like to call them), during which the highest honors in youth literature—the Newbery, the Caldecott, and the Printz—are announced.

I was aware of the YMAs long before becoming a librarian—for one thing I tried to read as many Newbery Award-winning books as I could when I was younger (and stalled out at Maia Wojciechowska’s Shadow of a Bull). Later, as a bookseller in the pre-Internet days, suddenly getting 20 phone calls in a row for Tuesday by David Wiesner, could only mean one thing—we needed to order more because it had just won the Caldecott. 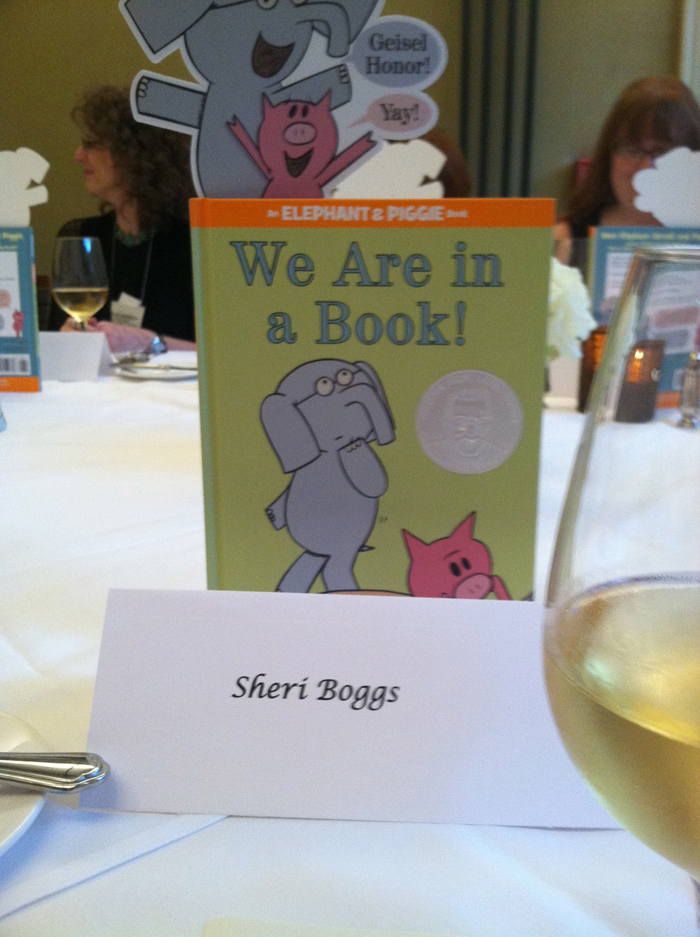 In 2011, I had the rare and wondrous opportunity to serve on the Theodor Seuss Geisel Award committee. The Geisel, named for the man who most of us know of as Dr. Seuss, is awarded to the most distinguished contribution for beginning readers, and while it’s not as well-known as the Newbery or Caldecott, it’s every bit as important.

I learned how much work really goes into the writing, illustration and design of a successful easy reader, I discovered how popular they are with kids making the jump from picture books to reading on their own, and on the Monday morning my committee’s pick was announced to the world, I realized how significant these books are in the zeitgeist of children’s literature. As my committee sat breathlessly in our reserved seats at the Youth Media Awards that January morning, we were surprised and delighted to hear the whoop and roar that rose up when our winner, Bink and Gollie by Kate diCamillo, was announced.

We loved the book, a gently witty tale of friendship and differences, but it was something else entirely to see that we weren’t alone, and that many of our peers felt just the same way we did. It’s that moment I always think back on each year when the Youth Media Awards (including the Geisel) are announced.

Being on one of the committees taught me a lot, not just about the Geisel and beginning readers, but about how the rest of the Youth Media Award winners are chosen and how they are, after all these years, still relevant and important in the ever-expanding world of books for children and teens. Here are a few of the “behind the scenes” things I learned from my time on a Youth Media Awards committee and carry with me still:

Before serving on an awards committee, I assumed one had to be a reading specialist, or have a Ph.D. in education, or at the very least, be on the faculty of a prestigious library and information science program. I discovered that it was far more important to be curious, passionate, cooperative, and willing to articulate a book’s merits or lack thereof.

We each had an official awards committee manual, tailored to the specific requirements and guidelines of choosing the Geisel, and I read almost everything on the bibliography just to give myself as much background on beginning readers as I could. The rest I learned through our group discussions, which happened in person less than six times but which were invaluable in terms of learning about the history of beginning readers and understanding how to interpret what makes a book distinguished, or of the most merit to kids learning to read. In the end, I felt like I’d become a kind of expert, if nothing else, on the books I championed to the rest of the group and on the importance of this award. More about that in a minute.

My committee of seven members was composed of two librarians at the height of their professional careers, two in the middle, two at the beginning (including me), and our chair, a frequent reviewer for Horn Book magazine. It was easy to feel intimidated but I quickly grew to trust the rest of the committee, who were unfailingly friendly and helpful. I know this isn’t always the case—even before I’d accepted the appointment to serve on the Geisel committee, I’d heard horror stories about committee work on some of the biggies—for instance the endless reading and professional jockeying that took place on either the Newbery or the Printz, or the rumor about the person on the Caldecott who leaked the winner and brought down shame upon her entire committee. I don’t remember the specifics at all now, but they were tales we shared like ghost stories on our group breaks, or walking from one American Library Association conference hotel to another.

Hearing such stories, I was all the more grateful for my committee, who were hardworking, professional, fun-loving, and generally nice. It made our lengthy award discussions go all the smoother when we had to raise an issue with someone else’s favorite contender, or decide who would be the ultimate winner between three really good books. Our discussions were evolving, thoughtful, and provocative, and while I thought going into it I knew the winner, in the end we picked an entirely different book that I came to believe in and agree with 100%. It made me glad for the work we did together as a group and that the decision hadn’t been solely mine to make.

I’d heard people joke about how the Newbery and Caldecott are chosen at midnight in a ceremony with so much secrecy it might as well involve robes and candles and maybe a human sacrifice or two. The truth is, there is a lot of secrecy involved to being on one of the awards committees, but it’s generally to protect the surprise of the award winner for the big reveal the morning of the Youth Media Awards.

The authors and their publishers do find out in advance, in some cases just hours before the winners are announced to the world. In the case of our winner, Kate diCamillo, our chair had to dive into some nearby bushes to give her the big news (and keep it from the hundreds of librarians milling around the San Diego Convention Center). 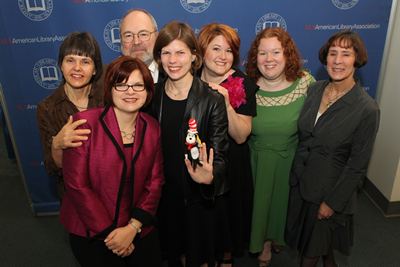 Sheri (third from R) and the 2011 Geisel Award Committee the morning of the Youth Media Awards, January 9, 2011

Beyond that, there are all sorts of rules about confidentiality, about social media use, and even how the votes are tallied amongst each committee. It contributes to a rather exciting sense of mysteriousness, and while we didn’t have a secret handshake, the Cat in the Hat did become our unofficial mascot (even showing up in our official American Library Association committee photo if you look hard enough).

There are also perks once the award is announced—including publisher-sponsored dinners with our award and honor winners, and even thank you gifts like the super special issue Bink and Gollie watches given to us by Candlewick Press.

Of course the awards matter to librarians, teachers, authors, and publishers. One of my favorite memories was hearing one of the contributors to Bink and Gollie, a respected artist for Pixar, choke up a little as he talked about how receiving the Geisel was one of the most meaningful experiences of his life.

But I think the awards also still matter to kids. One of the major criticisms lobbed at the awards each year is that the books are never what’s popular with children or teens, and that’s a valid point. The winners are rarely what you could call bestsellers. But they do push the boundaries of what’s possible in children’s lit, they celebrate stories that haven’t been told before, or they highlight voices that aren’t currently being heard in youth literature. In the case of the Geisel, they raise the bar for books that have historically been somewhat formulaic and workmanlike, and each year since the award was first given in 2007, it seems beginning readers are just getting better and better.

As for the other “smaller” awards, each brings fresh awareness to its field, be it nonfiction books, books for GLBT youth, books celebrating African American history and culture, and even audiobook recordings. For the bigger awards, the Caldecott, Newbery, and Printz, which are given for best picture book, book for children, and book for teens, respectively, each year is an opportunity to highlight an amazing new book that might not find a broad readership. It’s here where I think the Youth Media Awards really shine, and why I get so excited each year to find out, at last, what the winners will be.