Beyond dorks & wimps: Graphic novel hybrids after Diary of a Wimpy Kid and Dork Diaries 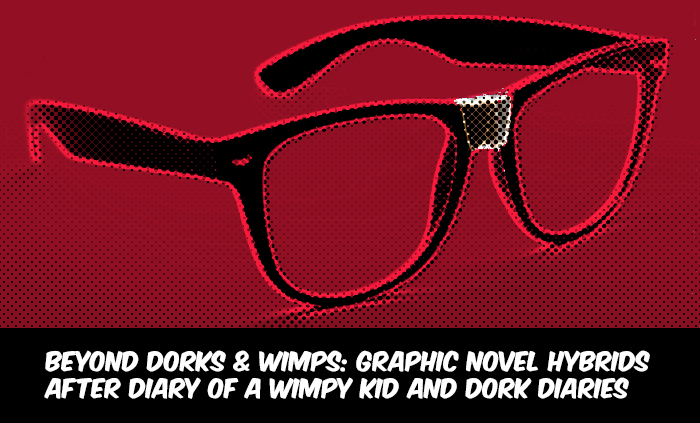 If there’s one thing I’ve learned from being responsible for stocking the sections for “Kids Books to Go” at the Library District, it’s the perennial popularity of comic book heroes and their antics.

“Kids Books to Go” is a bookstore-style display of multiple copies of high interest titles. Since its launch, year after year, the most popular titles have been Diary of a Wimpy Kid, the Dork Diaries series, and the latest iteration of the Garfield series in the display.

It’s easy to see why the graphic novel hybrid, as this genre is called, has such strong circulation at our libraries. The highly visual format is a natural for the relaxed pace of summer reading, and the illustrations are immediately engaging, often pulling young readers into the story before they’ve read a single word.

Research on reluctant readers also indicates that the graphic novel format, with its emphasis on easy-to-follow visual action and word bubbles, helps inexperienced readers learn how to decode text. Plus those visuals are just plain fun. For readers, these titles are a known quantity—“diary” graphic novel hybrids are highly likely to deliver a relatable main character and plenty of laughs.

For fans of Diary of a Wimpy Kid and the Dork Diaries, Misadventures of Max Crumbly is the ideal next step. It’s a relatively new series by Rachel Renée Russell, the author of the Dork Diaries, and features a male hero, like Diary of a Wimpy Kid. Max Crumbly isn’t sure he’s ready for middle school—what with having to keep track of so many different classes, a locker combination, and the coordinates of school bully Doug, whose favorite extracurricular activity is stuffing Max into his locker. Max doesn’t have a lot of skills but he does have a preternatural ability to smell pizza, which turns out to be a major plot point for book two: Middle School Mayhem.

Raina Telgemeier also authors books that delve into real world tween issues, including siblings, braces, middle school, family problems, pet snakes, first crushes, and more. Sisters and Smile are both autobiographical. Drama is a brilliant title for a book about the intrigue behind the scenes of a middle school production of “Moon over Mississippi.” And her most recent book, published last fall, is Ghosts, which is about a girl whose family has moved to a small North Carolina town, where the air is better for their daughter with cystic fibrosis but is apparently completely haunted.

In recent years I’ve been happy to see graphic novel hybrids take on more emotional depth. Real Friends is Shannon Hale’s semi-autobiographical story about a sensitive fifth grader’s attempts to make and keep friends. Alternately afraid of the mean girl at school who has managed to corral all the girls to her side and her sister at home often depicted as an angry bear, Shannon uses her imagination to cope with the confusing social undercurrents around her. Hale writes from the perspective of an adult and effectively conveys the pain of adolescence, which spares no one—not even older sisters or mean girls.

Brave, by Svetlana Chmakova, takes place in the same middle school as Awkward, but this time features Jensen, the kind of good-natured big kid who is always picked last for teams and is never sure if the other kids are laughing with him. While Jensen uses gaming and the world of superheroes to make sense of his environment, he has to learn some real world skills when he’s encouraged to join the school newspaper club with two well-meaning female classmates. Chmakova incorporates diversity with a light but realistic touch and offers a surprisingly affecting story, couched in a bouncy visual style.

Invisible Emmie, by Terri Libenson, is the next title to give fans of Dork Diaries if they’re due to hit middle school any time soon. Emmie is a painfully shy seventh grader, whose love note to a crush falls into the wrong hands. In contrast to Emmie is athletic, confident Kate. It wouldn’t seem that Emmie and Kate would have anything in common, but as the story unfolds both girls’ lives intersect in surprising ways.

The graphic novel hybrids I’ve looked at so far tend to be more realistic and nuanced. But that’s not to say that there’s no love in my heart for pure fun!

Jennifer Holm’s super popular Babymouse series gets an upgrade with Babymouse: Tales from the Locker, in which Babymouse is older, wiser, and ready to take on all the challenges of middle school. In the first of the series, Lights, Camera, Middle School, Babymouse joins Film Club with an eye toward directing a cinematic masterpiece. Middle school being what it is, however, Babymouse finds more of her energy being diverted to managing the various strong personalities and non-existent budget of Film Club.

CatStronauts is that rare humorous graphic novel series that takes place nowhere near a middle school but instead in outer space. In Mission Moon, the feline astronauts attempt to solve a global energy crisis by turning the moon into a giant solar power plant. In Race to Mars, the CatStronauts compete against the CosmoCats to be the first to “set paw on Planet Mars.”

Dog Man is the Captain Underpants spinoff that fans of Dav Pilkey and canine justice have long been waiting for. The first two books of the series are out now; Dog Man: a Tale of Two Kitties is due out at the end of summer.