Bruce Holbert: Late to the party

Not long ago, I was asked in an interview, “What took so long?”

I was then 52 and publishing my first novel. I don’t have the data at hand, but my guess is I am beyond the mean.

The question struck me as impolite. I wasn’t sleeping in doorways or staggering through a drug-induced stupor those years (although that would have made for an interesting answer). I helped raise three children with whom I’d rather spend time than most any adults; I navigated thirty years of marriage with fairly happy results; and I excelled (by others’ accounts) in a high school teaching career. I bought a house and sold one and bought another. I participated in Cash for Clunkers; I obeyed the Patriot Act (or at least what I knew of it); I stopped on red and went on green, paid taxes, drove on the correct side of the road, used credit in moderation, avoided smoking in no-smoking areas, honored my parents, avoided felonies whenever possible, and I kept writing. That’s a pretty full life, it seemed to me.

Admittedly my inquisitor’s question was not without grounds. In 1990, I graduated from the University of Iowa’s Writers Workshop, one of the nation’s leading schools for young writers. While there, I worked on a nationally regarded literary magazine, The Iowa Review, and won a Teaching Writing Fellowship. Peers I felt were equals published novels and story collections and memoirs to acclaim well before the age of forty, let alone fifty.

I admit the latter left me feeling cursed, or, more accurately, exposed. The truth is, I felt, even in graduate school, like a charlatan. My peers had earned undergraduate sheepskins from Harvard, Cornell, Stanford, Yale, Columbia, and Boston University. I matriculated at Eastern Washington University in Cheney, Washington, where I earned a 2.9 grade point average. My biggest accomplishment was forging the signatures of three deans to garner placement in Kay Boyle’s graduate writing workshop where, by the time I was found out, she insisted I stay.

I was raised in a bookless world before then. My father worked construction, and I lived in 23 different towns before age six. We pulled a trailer and I became schooled at leveling and blocking the wheels and reattaching propane tanks and igniting pilot lights. It was an existence not unlike many others I knew and it was not unpleasant. I was, though, a mutant. I read and thought thoughts that appeared impractical to those around me.  Though I managed to commit enough minor crimes to eventually appear part of my particular herd, I did so with a wooden self-consciousness.

And somewhere I learned to write sentences.

So Iowa admitted me, then allotted me a generous fellowship. There, I flourished. Iowa reminded me of a greenhouse, where the best horticulturalists applied the finest fertilizer and the optimum light and water, and you grew as if on steroids, into rose buds the size of your head with thorns lethal as sabers. It was incredible, literally: I didn’t believe it. I was on a sabbatical from the only job I ever did well—teaching high school English. So I returned home to the plausible.

I wedged writing into evenings and between baseball games and concerts and family trips. But every manila envelope I deposited in the mail became less an act of faith than a frustrated blow against the certainty of rejection.

I have read many writers complain that family was an impediment to their work. Mine was the opposite: my marriage and my children eventually informed my work, slowly, but significantly. Over years, they led me to recognize my writing self was not simply a stranger in a strange land trying to acquire the skills I lacked. I resided in a life and in a story structure already. I began to hear my own voice when I spoke to them and its echo when they answered, and eventually, when I wrote, I grew able to work from the place from which those sounds came.

This did not end in immediate publication, however—it seems the long way is the only one I know. But it did lead me to a coherence concerning my own work, one less clouded by the inflection of others and the voids within myself. And then, it took time to listen closely and hear clearly the syntax and habits of lexicon, and then happen onto the characters who would speak so and the events that would occur in such lives. And then, as it is a singular voice peculiar to me, it took more time to find someone, an agent or an editor, compelled by its possibilities instead of its nearness to others that have made their way into the publishing world.

So, it took so long because early in my life I learned to doubt the sound of my own voice and the lesson stuck, whether I resided in a construction town trailer court or the best graduate school in the country. Oddly enough, the reason my work found a home was because the facets of an ordinary life that artists typically regard as impediments finally taught me otherwise. It was a mighty wide circle, I admit, but the territory within it is my own and I am not inclined to trade it for less property even if it was attained more quickly.

Bruce Holbert will be leading the workshop Where Are We Again? on Saturday, Oct 29, as part of the NaNoWriMo Readiness Conference. 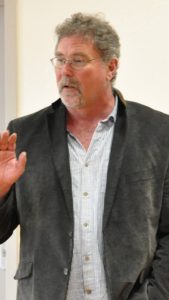 Bruce Holbert attended Eastern Washington University and earned his M.F.A. in fiction writing at the University of Iowa Writers Workshop, where he assisted in editing The Iowa Review and held a Teaching Writing Fellowship. His short fiction and nonfiction has appeared in numerous well-regarded literary magazines as well as the Spokesman Review and The New York Times, winning annual awards from The Tampa Tribune and The Inlander. His novel Lonesome Animals was a finalist for the Western Writers of America’s Best Western Short Novel. His novel The Hour of Lead was a Kirkus Best Fiction of 2014 and the winner of the Washington State Book Award for Fiction in 2015. His latest novel, Whiskey, will be published by Farrar, Straus and Giroux in 2017.