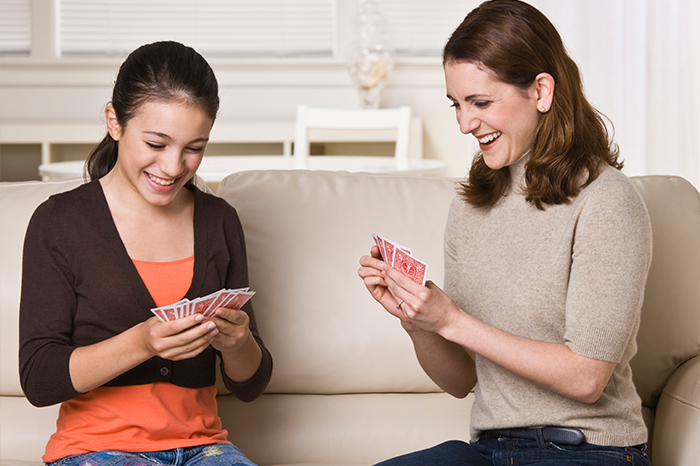 Card games are a way of life in my family. As children, we started off with simple games like Go Fish and Thirty-One. By elementary school, most of us had graduated to Golf and Spades. And forget moving up from the kids’ table at Thanksgiving—in my family you’re considered an adult when you get to play Pinochle and Hand and Foot with the grown-ups.

No, my parents weren’t trying to turn us into adorable, pint-sized card sharks. What they had figured out was that, in addition to being a fun group activity, card games are also a sneaky way to get kids to work on their math skills.

Reinforcing the information and skills kids are taught in school isn’t always easy for parents (I remember quite a bit of whining whenever my mom pulled out the math flash cards). Games, on the other hand, provide an opportunity to make math interesting and encourage children to engage with their math skills in new ways, all while disguising it in fun.

On a very basic level, most card games require players to use problem solving and critical thinking skills. What’s great is that a single deck of cards can provide hundreds of different games, many of which help build and reinforce skills such as counting, number order, addition, subtraction, and multiplication. For example, a classic card game like War builds number order and recognition skills and can be adapted to practice addition, multiplication, and even fractions. Even better, card games give children the chance to repeat a math skill over and over, with slight variations, which can actually help them pick up those skills quickly.

The choices in card games seem endless, but I pulled together a few of my favorites, many of which can be adapted to work for a wide range of ages and skills.

Deal out the cards evenly to each player and have them hold the stack face down. Turning over the cards three at a time, players create two stacks and try to sort their cards by a specific attribute (e.g., color, number, suit). They can play on their own stacks, or on their opponents! Whoever gets through their cards first, wins.

Begin by removing the face cards, but keep the aces (they’ll have a value of 1). Deal 12 cards in a line face up between players. Players take turns selecting card combinations with a sum of ten (e.g., ace + 9; 2 + 4 + 4). When all players agree that no further combinations can be made from the remaining cards, deal out enough cards to the middle for a total of 12 cards. Continue playing back and forth until all of the cards have been selected or no more combinations are possible. The winner is the person with the most combinations in their hand.

Subtraction variation
Give Me 1: Rather than selecting cards that add up to 10, players attempt to find card combinations with a difference of one.

Deal all of the cards out, face down, between the two players. Players call “draw” and both flip over their top card. The first player to say the correct sum of the numbers wins both cards. If a player says an incorrect answer, the other player wins the cards. The player with the most cards when the deck is finished wins.

Subtraction/multiplication variations
Players race to say the correct product or difference (by subtracting the smaller number from the larger number) to win the round.

This is has a little twist from the game you may be familiar playing. Deal all of the cards face down between the two players. At the same time, players flip two cards and the player with the largest number keeps all four cards (see below to determine the largest number). The game is won when one person has all of the cards or the second player cannot turn over two cards for her turn.

Depending on what skills you’re working on, you may choose to remove the face cards; if you keep them, use the following values: ace = 1, jack = 11, queen = 12, king = 13. Ties are less likely with these variations but can be settled the traditional way—flip two cards face down and the third card face up. The person with the largest face-up card keeps all of them.

Place values variation
After flipping the cards, move them around to get the biggest number you can.

Addition variation
Players add the two cards together. The player with the largest sum wins.

Subtraction variation
Players subtract the smaller of the two numbers from the larger number. The player with the largest total wins.

Multiplication variation
Players multiply their two cards together; the player with the larger product wins. After players have mastered the basic multiplication tables, you can also try adding more cards at the initial flip to work on more advanced, multi-digit multiplication.

Fractions variation
Players use the smaller of the two numbers for the numerator (top card) and the larger number for the denominator (bottom card). The player with the larger fraction wins.

Addition variation
Player one will request two cards that add up to a certain number (for example, “I spy two cards with a sum of 7.”).

Multiplication variation
Player one will request two cards that when multiplied together make a certain number (for example, “I spy two cards with a product of 56.”).

Number order variation
Rather than giving a specific number or equation, player one will select a number and state the number greater than and less than another number (for example, “I spy a card that is greater than seven and less than nine.”). Instead of seeking pairs, the other player(s) will select the single cards that match the statement.