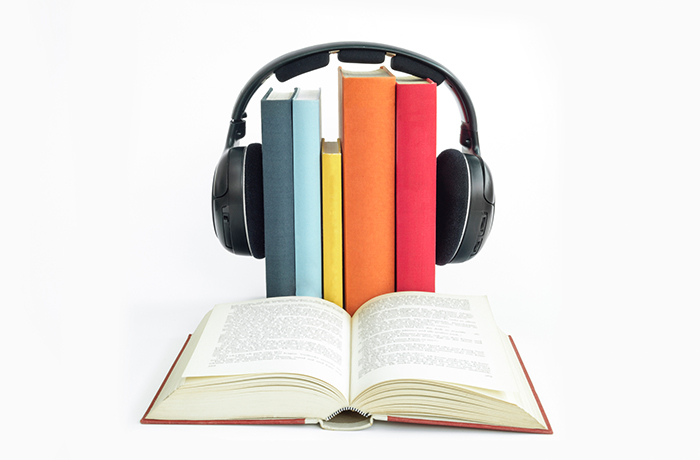 I understand that, as a librarian, I am expected to have piles upon piles of books throughout my house and be well versed in all types of literature. With that said, I have a confession to make: I have piles of half-read books around my house. As a full-time working mom of a rambunctious 5-year-old boy, I find myself starting a book, marking the page, setting it down, and forgetting about it. This is not at all because I dislike reading or don’t want to, I just don’t have the time!

Instead I find that I’m get my reading in the form of audiobooks, and I am officially hooked. (Yes, audiobook listening is reading! Read more on learning styles.)

I get audiobooks in two ways: off the shelf at the library in CD form or downloaded from OverDrive or Hoopla. I listen while I’m driving, working out at the gym, and doing housework. I love how, when you find the right book, the audio performer can bring the story to life for you. Believe me, there is a reason publishers call audiobooks “performances.”

The Night Circus by Erin Morgenstern, performed by Jim Dale 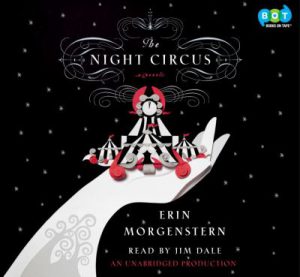 This love story is told in the most fantastical way. Celia and Marco have been training as circus magicians since childhood. Unbeknownst to them, they are being prepared for a game in which only one of them can be left standing. Fate brings them together and they fall in love, running headfirst into a chain of events that leaves the lives of everyone in the balance.

Jim Dale has voiced many audiobooks, including every Harry Potter title. His interpretation of characters is astounding and you won’t want to stop listening. 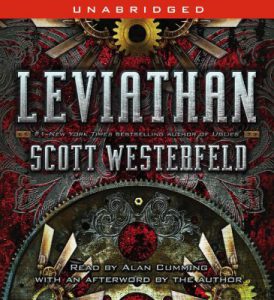 In an alternate history, Europe is heading towards a World War. The Austro-Hungarians are feuding with the British Darwinists. The story follows Aleksandar Ferdinand, the newly orphaned prince of Austro-Hungary, who is on the run and in hiding from his own subjects determined to take his throne. Also, Deryn Sharp has just joined the British Air Service and is praying no one finds out she’s a girl. These teens cross paths and find themselves aboard the airship Leviathan, where they learn the line between ally and enemy is very blurred. 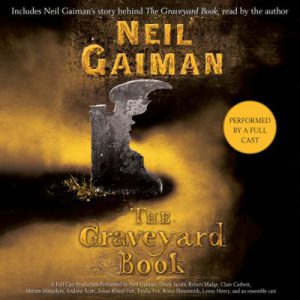 I am an equal opportunity listener, which is why I am adding a children’s book to this list. You may be surprised to find out that a lot of times children’s books can be filled with amazing plot lines and touching characters. The Graveyard Book offers all that and more! Nobody “Bod” Owens is the only living resident of a graveyard and has been reared by the ghostly inhabitants since infancy. As Bod grows into a teenager, he learns that there are far more frightening things outside the graveyard walls.

This audio-book is read by the author, which in some instances is not a good idea. However, that is not the case with this performance. Gaiman shows so much passion for his story that you feel for the characters and are entertained by his narration.

The Tsar of Love and Techno by Anthony Marra, performed by Mark Bramhall, Beata Pozniak and Rustam Kasymov 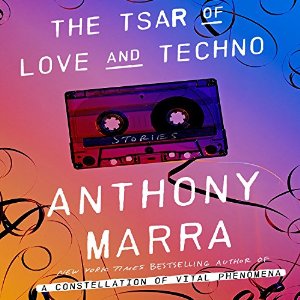 This collection of short stories is the selection for this year’s Spokane is Reading event. Marra’s stories span decades, from 1930’s Leningrad to present day Chechnya. We meet an artist turned censor who paints the face of his dead brother over men he is forced to erase from photographs and the history. We meet a ballerina accused of treason, and later her granddaughter who briefly becomes famous. Next we meet her ex-boyfriend who is captured by rebels during the war and forced to recreate a landscape in an oil painting that surfaces in multiple stories throughout.

This novel comes to life through all three narrators’ performances. By far, my favorite story in this collection is “The Grozny Tourist Bureau.” But you may not get as much from it if you don’t read the entire collection of stories. This book is meant to be read or heard in its entirety. You won’t be sorry you did.

If you have an audiobook performer you love, please let us know, so we can share!