Game On! Games to Give and Receive

My love of strategy games began a long, long time ago, in the days before kids…OK, it wasn’t that long ago, but having game nights with friends was much easier, and happened a lot more frequently, before kids entered the picture. It all began with a group of friends that got together once a month to share a meal and play the game Settlers of Catan into the wee hours of the night. Eventually, expansion packs were bought and Cities and Knights became a favorite.

But then came kids.

Luckily, some out-of-town friends introduced us to a game called Ticket to Ride (we prefer the Europe map). While we were staying with them we’d put the kids to bed and then stay up far too late playing, talking, and laughing. It just took one weekend and we were hooked. Fortunately, this game can be adapted for two players, so even after our trip was over, my husband and I could take our obsession home with us.

A few years later, we were introduced to Dominion and one of its many expansions, Prosperity. These are our current obsession partly because, like Ticket to Ride, they work well for two players, so once the kids are in bed, we can play a game or two before 9:30 hits and we are turned into pumpkins. These three games and their expansions have been our go-to games for the last eight years or so and are at the top of my recommendation list when people ask what games we enjoy. 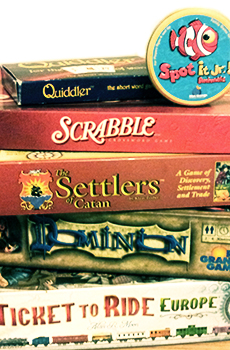 Now that I’ve confessed my love of games, you might assume I like to play games with my kids. You are wrong. Playing games with young kids is torture. Meltdowns when they hit a shoot and slide all the way back down the board, getting asked if you have a dog every single turn in Go Fish for over half the game, and creepy candy characters on the playing board (you know which game I’m talking about) leave me near tears. I usually have company though, because most games end with my kids in tears as well. I’m pretty sure as my kids get older, I will start to enjoy games with them. There are some great kid’s games out there that my kids just aren’t old enough for yet. Until then, I have found two games that don’t make me want to gouge out my eyes. First is Uno Moo. It’s Uno for little ones and they love it, and I can put up with it. My favorite, though, is Spot It! We have the Spot It Jr.! Animals version and my five year old loves it and neither of us has cried yet (we pretty much keep games away from the toddler, toddlers and games just don’t mix.)

Now that I’ve shared my recommendations with you, I must confess that I have not kept up with the world of games. I have no idea what popular games have come out recently. While preparing to write this post, I also realized that with the holiday season coming up I’m hoping to add some new games to our collection and maybe buy some fun games as gifts for our friends and family as well and I have NO IDEA what to buy. Then I had a brilliant idea. What better way to find out about the hot new games this season then to talk to Spokane’s very own Uncle’s Games? 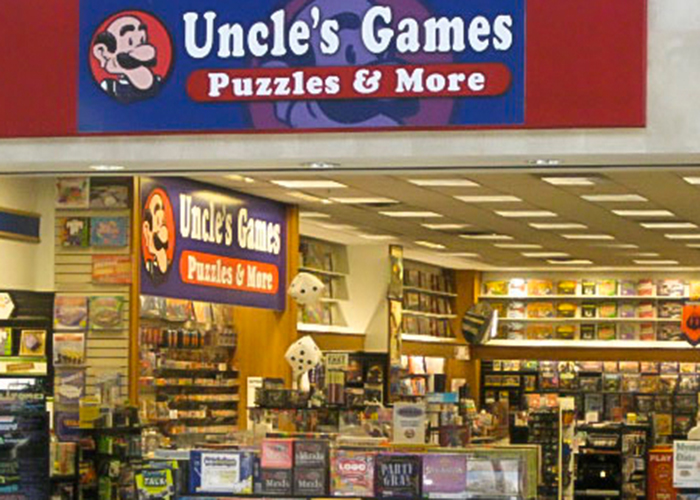 Rick, the manager at Uncle’s Games in Spokane Valley, kindly agreed to do a little Q&A with me and give us the goods on this season’s hottest new games, recommendations for ages and stages, and some other insider information…

First, a little bit about Rick and Uncle’s…Rick Meissner has been with Uncles for 12 years. Uncle’s Games, which is based in Spokane, now has five stores: Two in Spokane, and one in Redmond, WA., Bellevue, WA., and Tacoma, WA. Uncle’s Games was founded in 1978 and considers itself to be a family-oriented organization.

Before we get into the new stuff, I’m curious, what are your bestselling classic games?

I love Quiddler! Also, I grew up playing Cribbage with my Grandpa; although Cribbage might not be considered a typical kid’s game…I’d love to hear what some of your bestselling kid’s games are.

Spot It!, Doodle Quest, card games such as Rat-A-Tat-Cat, and Sleeping Queens, Guess Who, and Robot Turtles.

I already professed my love for Spot It! Great game! Now I’ve got several new games to try with my girls. Let’s move onto bestselling party games…

Wits and Wagers! I haven’t played that in a long time…Ok, we’ve hit a few specific categories, now I’m curious what the overall bestsellers are?

I’m not surprised by the first two, since I’ve been addicted to them for a while now. The rest of them make me realize just how out of touch I am—not only have I not played them yet, I’ve never even heard of them! I’m going to have to remedy that soon. Now that we’ve covered popular opinion as represented by bestsellers, I’d love to hear some of your professional recommendations. Let’s start with kids. What are your favorite games for young kids, elementary age, and teenagers?

For young kids, I recommend Spot It! and its variations (Readers, are you seeing a theme here? Spot It! is a must have for those with little ones!) Basically it’s a fast-paced matching game. In a pack of 55 cards, each card has 10 pictures on it and there is a match between every card. The person who spots it first wins that card. For elementary age kids, Rat-A-Tat-Cat is one of my favorites. It’s lots of fun and it’s also educational because there is some light math involved. I also like Doodle Quest which is a drawing and memory game. For teens, I recommend Boss Monster: The Dungeon Building Card Game. It’s inspired by classic video games and challenges you to become a villain, build a dungeon, lure in adventurers, and then destroy them. This is one we expect to be a holiday best seller.

I’m so excited to try some of these. What about those who are looking for a fun group game for holiday parties?

For a small group, I like Battle Sheep. It’s a strategy game where you try to claim as many “pastures” as possible while trying to block your opponents from claiming them. It’s a short game, only about 15 minutes. For a larger group, I like Snake Oil. It’s a fun family game. Players take turns trying to sell each other products based on the cards they have in their hands.

I’ve heard of Snake Oil, our friends say it’s hilarious. I’ve heard it compared to Apples to Apples as well. OK, this question’s a hard one. If you had to pick one overall favorite, what would you pick?

Concept. It’s a game for 4-12 players and ages 10 and up. It takes about 40 minutes to play. It is a game similar to 20 Questions except that the person giving the clues uses markers on a board to help the group get the answer. The board has icons on it such as: male, female, happy, sad, big, small, colors, flying, shapes and about 40 more to help the group guess the answer. An example would be: to get the group to guess “bee” the clue giver would put a marker on animal, yellow, black, small, and flying and hope that the group guesses “bee.” This is an easy one, but a more difficult one would be “Santa Claus”. Lots of fun and thought involved!

I’ve saved the best question for last. We all want to know, what are the hot new games coming out? What do you expect to be bestsellers this holiday season? Help us make our holiday shopping lists!

Sheriff of Nottingham is a brand new card game where players each take turns trying to get “goods” into the city under the watchful eye of the sheriff. Each turn one player is the sheriff and the rest are merchants trying to make a profit. They can either make a quick profit on legal goods or try going big for illegal goods. We also have big hopes this holiday season for Boss Monster, which I mentioned as my pick for teens, Star Realms and CardLine.

Sheriff of Nottingham sounds fun; I think I’m going to have to add that one to my wish list. Anything else you want to share with our readers before we go?

Yes, one of the most important aspects of our business is our events. Almost every day we have a game event going on. Some of these events include home school groups, board game groups, Pokémon, Magic the Gathering, Star Trek Attack Wing, role playing groups, Yu Gi Oh, Star Realms, Dice Masters, and others. Some of these events are free to play, some have an event fee, and most include some form of prizing. We generally have good attendance at our events and people enjoy themselves in a family atmosphere.

Thanks so much to Rick for taking the time to share his expertise with us. I love Uncle’s Games and have always found the staff very helpful when I ask for input and recommendations as I choose games. While I am not a big fan of shopping, I am officially getting excited about my holiday shopping this year! The hardest part is going to be narrowing down which games to buy…