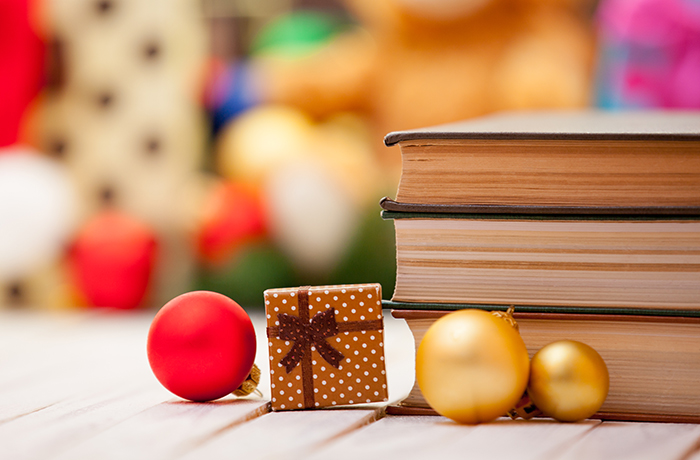 In looking over the thousands of books published in 2016, I have found that there’s no shortage of great gift ideas for the children and teens on your holiday list.

A few high profile releases come out before or around Thanksgiving: Diary of a Wimpy Kid #11: Double Down and the newest Rick Riordan book. Plus there are so many fantastic releases coming out in the last few months of the year that would make great gifts and deserve kudos and perhaps a spot on your own bookshelf. Here are just a few of my recent favorites appearing now or soon on bookshelves at the library. 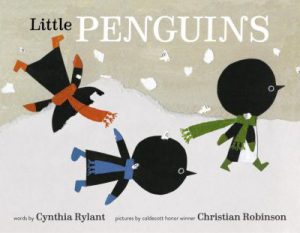 It’s the first snowy day of winter and five little penguins put on mittens, scarves, socks, and boots before going outside to play. Cynthia Rylant’s spare, straightforward text captures the simple excitement of waking up to snow, while Christian Robinson’s acrylic and cut paper collage illustrations evoke the classic lines and shapes of Ezra Jack Keats’s The Snowy Day. With objects to count and fun details to find, this is the perfect winter book for the smallest readers on your list. (Ages 3-7) 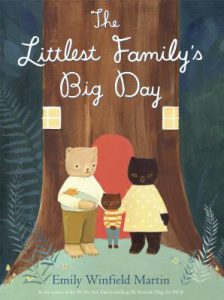 Like a cross between The Borrowers and Goldilocks and the Three Bears, The Littlest Family’s Big Day is a delightful forest adventure in miniature. A family of tiny bears ventures out with their youngest, a baby fox, in a walnut-shell stroller. Along the way they meet other tiny woodland creatures, including squirrels, rabbits, snails, and elves. The bold cursive text invites kids to guess what happens with the turn of each page, and Martin’s whimsical paintings are filled with wonderful surprises. (Ages 3-7) 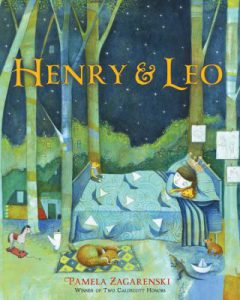 When Henry loses his stuffed lion Leo in the forest, Henry’s sister says Leo is just a toy and is therefore not real. Henry knows Leo is real, but he’s not so sure Leo can find his way home by himself. As night falls, Zagarenski blurs the line between Henry’s real-world bedroom and the intricate, dreamlike woods with curling lines and a palette of blues and greens, while some of Henry’s other toys (a bear, a fox, and a rabbit) rally to save the day. A lovely affirmation of boy–stuffed-animal friendships and the power of imagination. (Ages 4-7) 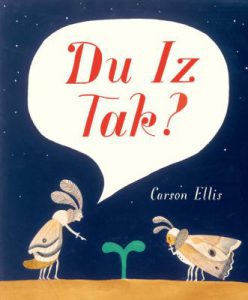 Ellis’s signature intricate, gently peculiar illustrations with loads of creamy white space and literal flourishes of text are the perfect counterpoint to this tale of insect discovery and invented language. “Du iz tak?” one bug asks another, both of them regarding the green curl of a surprise plant shoot. “Ma nazoot,” the other replies, equally baffled. As the sprout grows into a magnificent flower, the insects continue their conversation and speculation, while the reader puzzles out the meaning of their made-up words. Ellis invites the viewer to look closer, outfitting her bugs with tweed jackets, pirate flags, tiny hats, and even spectacles. Wonderful as a read-aloud (the right emphasis can make even the most made-up word’s meaning crystal-clear), Du Iz Tak? works just as well for solitary perusal. (Ages 4-8)

I Am a Story 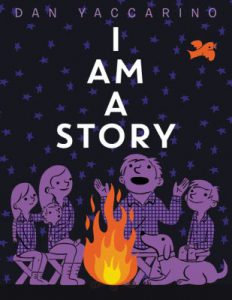 Story tells its own story—from its humble beginnings around the ancient campfires of primitive humans to the books and movies and TV shows of today—in this visually stunning picture book. Story is proud to share its trials and triumphs over the centuries and its various forms, encompassing cave paintings, clay tablets, theater stages, radio programs, puppet shows, and more. Yaccarino packs a lot into his minimal text and bright graphics, even touching on issues of access and censorship (as much as Story is for the entire human race, there are those over time who sought to control its expression and access). A great gift for readers of all ages, or for any teachers, writers, and storytellers you might know. (Ages 4-8)

We Found a Hat 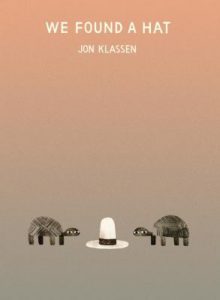 The third hat-themed picture book by Jon Klassen (I Want My Hat Back and This Is Not My Hat), We Found a Hat stars two tortoise friends who find a magnificent white cowboy hat in the desert. Trying it on, they realize it looks equally fetching on both of them. Deciding it wouldn’t be fair for only one tortoise to have the hat, they agree to “leave the hat here and forget that we found it.” But neither tortoise can actually leave and as night falls, one tortoise finds temptation too much to bear. Fans of Klassen’s dry wit and understatedly hilarious artwork will love this latest book. (Ages 4-8) 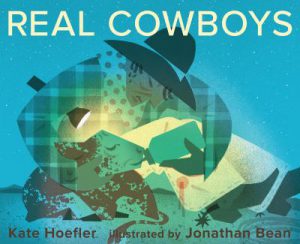 There are cowboys in movies and TV—rough-and-tumble characters with a ready pistol and a pronounced swagger—and then there are real cowboys, like the kind in Kate Hoefler’s Real Cowboys. Offering a much more realistic view of the cowboy life, Hoefler asserts that real cowboys and cowgirls know how to listen—to the sound of the wind or the voice of the trail boss—and they know how to be gentle, as when coaxing a baby calf to drink. Bean’s illustrations are similarly strong and quiet, with bold, stylized shapes rendered in form-diffusing stencils. Hoefler’s prose reads like poetry, evoking the lonely music of the cowboy campfire. (Ages 4-7)

Narwhal: Unicorn of the Sea 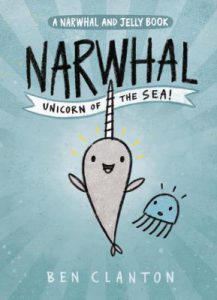 Books for beginning readers are full of famous buddy pairings: Frog and Toad, Elephant and Piggie, Mr. Putter and Tabby, and now Narwhal and Jelly. This entertaining easy reader/graphic novel mashup features expressive, strong lines and a minimalist color palette ideal for showcasing the adventures of an outgoing, waffle-loving narwhal and a cautious, equally waffle-loving jellyfish. Lots of jokes combined with the delight of discovering a true friend make Narwhal: Unicorn of the Sea rise above many of the books designed for this age group—fully realized fun. (Ages 6-9) 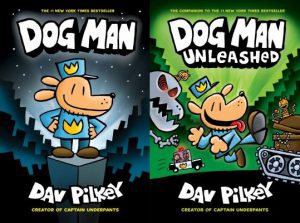 George and Harold, the two 4th grade best friends who accidentally brought Captain Underpants to life in Dav Pilkey’s wildly popular first series, create a new comic book hero in Dog Man—a crimefighter with the head of a police dog and the body of a policeman. Based on a character Pilkey created in the 2nd grade, Dog Man is fond of puns, creative spellings, and dubious grammar and considerably less fond of his archnemesis, Petey the Cat. Book him, dog man!

While the first book is out now, Dog Man Unleashed comes out two days after Christmas (but what better way to spend that check from Aunt Linda?) (Ages 7-10) 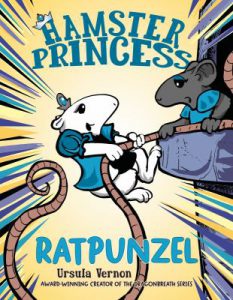 Princess Harriet Hamsterbone is never one to shy away from an adventure. So when her best friend’s mother discovers that her pet hydra’s egg has been stolen, Harriet sets out to retrieve it, along with the gentle Prince William in tow. As in the two previous Hamster Princess books, Harriet’s world has strong fairy tale elements, and in this case she finds herself outside a castle accessible only by climbing the very long tail of its prisoner. This delightful graphic novel/fiction hybrid features an irrepressible heroine while poking gentle fun at traditional, Disney-fied princess stories. (Ages 8-12)

When the Sea Turned to Silver 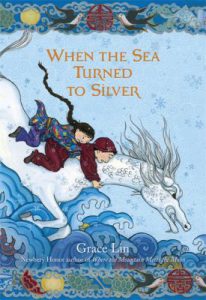 Newbery Medal and Geisel Award nominee Grace Lin returns to the thematic and cultural territory of Where the Mountain Meets the Moon and Starry River of the Sky with When the Sea Turned to Silver. Pinmei looks up to her grandmother, Amah, who is a wise and powerful storyteller. But when Amah is abducted by the Emperor’s men, shy Pinmei must look inside and find the resources she needs to rescue her beloved grandmother. This lyrical, folktale-based fantasy set in ancient China is illustrated with Lin’s full-color paintings and is ideal for kids who like atypical fantasy stories and ordinary heroes called upon to do extraordinary things. (Ages 9-12) 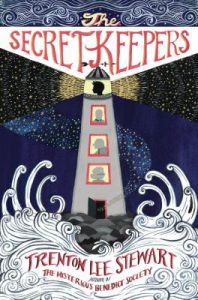 The author of the Mysterious Benedict Society series offers this new stand-alone novel, in which 12-year-old Reuben spends his days in the sketchy neighborhoods of New Umbra practicing parkour and worrying about his unemployed mother. When Reuben finds a remarkable, even magical, watch that gives its wearer the power of invisibility, he’s torn between wanting to sell the watch to give his mother a better life or using its invisibility to learn what New Umbra’s mysterious governing body, The Smoke, wants. At more than 600 pages, this one is for readers who love to stay up all night immersing themselves in another world or solving fantastical mysteries. (Ages 10-13) 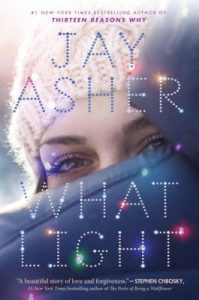 Pointing out that a novel sounds a lot like a Hallmark Channel movie isn’t necessarily a bad thing, and fans of light romance with holiday themes will thoroughly enjoy What Light, by Jay Asher. Sierra’s family runs a Christmas tree farm in Oregon and sells the trees at a tree lot in California. This year, Sierra’s California friend Heather insists she deserves a holiday romance, but Sierra isn’t so sure. When she meets Caleb, a boy with a troubled past, she is surprised at not only how strong her feelings are but how much braver Caleb inspires her to be. This feel-good story is like literary sparkling cider—fizzy, fun, and appropriate for a wide swath of teen readers. (Ages 12 and up) 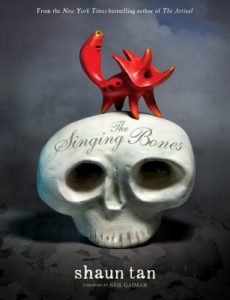 Fairy tale retellings continue to be some of the most popular materials we circulate here at the library, and one of the most original interpretations I’ve seen recently has to be Shaun Tan’s The Singing Bones. Using text abridged and adapted from the Brothers Grimm, Tan illustrates each with small clay and papier-mâché sculptures ranging from 2 1/2 to 16 inches tall. Each piece is painstakingly staged, photographed, and digitally edited by the author and paired with a micro-version of its story: often just a paragraph or two sketching out the entirety or just a part of the tale. Each fairy tale “bone” is fascinating in its simplicity; other reviewers have commented on their primitive, archeological look. With a foreword by Neil Gaiman and commentary by folklore scholar Jack Zipes, this thought-provoking book invites discussion and fresh interpretation. (Ages 12-17) 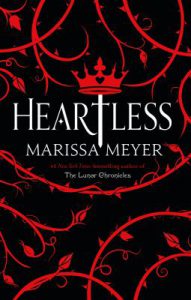 In what’s being called her best fractured fantasy retelling yet, Meyer reimagines Lewis Carroll’s Alice’s Adventures in Wonderland through the eyes of the girl who will one day become the feared and infamous Red Queen. Although Lady Catherine has been raised for court and to make a good (translation: royal) match, all she really wants is to bake tarts and open a shop to sell them in. That all changes when she meets the king’s mysterious—and handsome—new joker, Jest. Will Catherine be allowed to write the story of her own life and go where her heart leads her, or will she have to submit to powers far bigger than she? Meyer explores themes of fate and self-determinism, love and revenge, and freedom versus responsibility in this haunting and unforgettable story. (Ages 13-17)