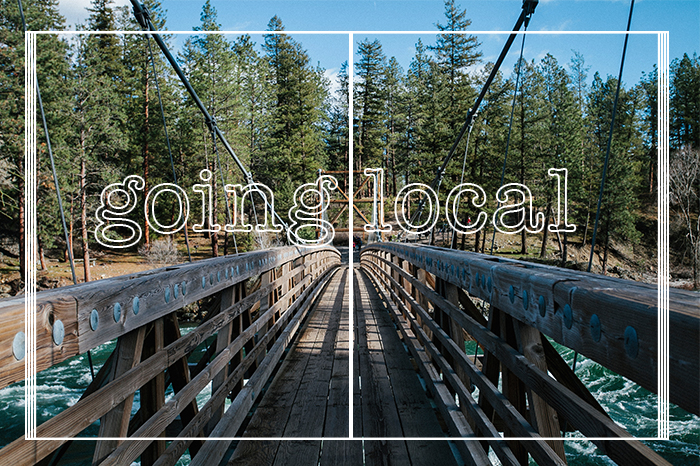 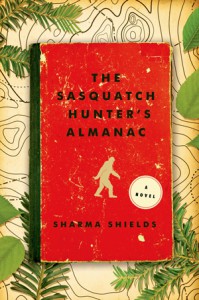 In a prominent corner or shelf of your closest County Library you might find stories about Sasquatch, about a derelict hotel rescued from obscurity, about a kid from North Idaho who implausibly becomes a drug kingpin before getting caught and going to prison. There are stories about a woman and her daughter who walked across the United States in 1896 in order to save their family farm and a book partially set in a donut shop named “Donut Make You Hungry.” Some are novels, some are nonfiction, a few are even DVDs. But the one thing these disparate items all have in common is that they were produced in, or written by residents of, Spokane County.

The Local Collection at the Spokane County Library District is just a little over a year old, but it’s quickly become a high-interest spot in each or our ten libraries. The idea for the collection evolved naturally out of the direction we were going as a library district. The District launched an ambitious Community Impact Plan three years ago, with a new emphasis on understanding the needs and interests of not just our community, but also of the many micro-communities that we serve throughout the county. In addition to demographic data gleaned from Community Connect software by CIVICTechnologies, we conducted ten community conversations designed to get at not just what our members want from their libraries, but from their communities as a whole.

“During these sessions we heard about the need for businesses that create good paying jobs so our children stay in Spokane to raise their families. We heard about challenges in getting from place to place,” writes Executive Director Nancy Ledeboer in the introduction to the District’s Community Impact Plan. “While the comments differed slightly from one conversation to another, one continuous thread was the desire to feel connected and know what is happening in the community. We heard in the conversations how people aspire to live in a community where there are places for people of all generations to gather and share local talent and make connections.”

With these observations as a guide, one of the emerging goals in our Community Impact Plan was to showcase local authors and/or artists at least five times each year. This goal inspired Jason Johnson, then-Managing Librarian at the North Spokane Library and member of local band, Buffalo Jones, to undertake a project filming local bands performing in our libraries. In the process of working with area musicians, Johnson started to amass a collection of their CDs and suggested creating a new music genre in the District’s collection for local music. Discussing how to create a local music collection inevitably raised a new question: “why not curate and display an entire collection of local materials?”

Leadership on the Public Services side met with selectors in Collection Services to discuss the logistics of such a move and to come to some consensus about the scope of the collection. Would it be just self-published and small press items or would it include such Spokane-bred but nationally recognized authors as Jess Walter and Sherman Alexie? Would it be just books or would there also be audio and visual materials? And were we including children’s and teen titles, or just adult? These were not merely logistical questions, but questions that pulled into consideration long-held beliefs and strong professional opinions. For selection staff, the issue of “local” quickly became a discussion about self-publishing. As any selection librarian will happily tell you, self-published materials can run the gamut between novels that could pass as the product of any of the big publishing houses to children’s books with colored-pencil illustrations by the retiree author. In the District’s Collection Services Department, we were already starting to add a few self-published titles by local authors if there were extenuating circumstances or some other strong reason to do so. But with the adoption of a new local collection, we knew we were opening a door that we’d been trying to keep halfway shut.

“As librarians we’ve tended to have a bit of a snobbish attitude toward self-published materials,” Ledeboer says. “But what we’ve been hearing in our community conversations is that people are interested in being creators and in having a place to share their work. We’re in a unique position to fill that need.”

As a selector, I’ll admit I was reluctant to let go of my snobbish attitude. In the bookstore where I’d worked right after college, the local section was an oddball assortment of hiking guides, local history, some poetry compilations, and a small green booklet of hand-drawn bike trail maps. But local authors who had hit it big, like Chris Crutcher and Sherman Alexie, were shelved with the “real books” over in the fiction section. It seemed like a step backwards to consider putting them back in with all the weirdo “Spokane” books. But at the same time, it seemed disingenuous to have a local section and not include authors who were from here but had graduated to the big time. The more we discussed it, the more I began to open up to the idea. Ultimately, we decided if we were going to have a local collection, it really needed to be representative of the depth and breadth of literary talent in the Spokane area. 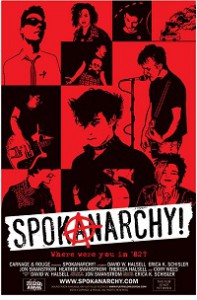 Now that the local collection is approaching its second year, we can see so many benefits to having created it. Locally produced items are showcased rather than being lost in the vast expanses of fiction or nonfiction in each of our libraries. Staff at our two largest libraries, North Spokane and Spokane Valley, report that their local collections are seeing a lot of browsing and circulation. On a personal level, it’s really fun to browse: where else can you find a book on the county’s rural cemeteries right by a documentary on Spokane’s early punk scene (SpokAnarchy: Where Were You in ‘82?). Most of all the local collection generates, at least for me, a sense of pride that there are so many great regional stories to share, and there’s room for everyone. There are anthology projects benefiting local non-profits, war stories written for the next generations, and more than a few New York Times bestsellers. In a lot of ways the local collection at the District is a microcosm of life in Spokane County, and these stories are a fine representation of what makes this area what it is.