A person must have incredible dedication, passion and drive to agree to volunteer 20 hours a week, for months at a time, on top of a full-time job. Would you give up 8 hours every Saturday for three months? Tom Blue, and thousands of volunteers over the last 52 years have done just that to raise funds for their children and Ferris High School. 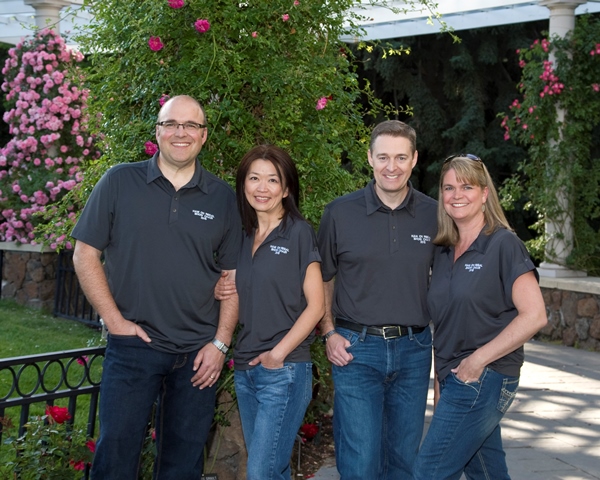 Tom is the parent of a Ferris Junior and one of four “Show Chairs” for this year’s Ham on Regal. Ham on Regal is the annual fundraiser running for a week each spring that is produced completely by Ferris parents and staff. This year’s show runs March 8 to March 14 and features 190 cast members and hundreds more volunteers. I interviewed Tom one afternoon this week to find out more about the famous production. Despite the time he is putting in before the debut in a couple weeks, he was all smiles and his enthusiasm for the show is contagious. It sounds like a blast and you’re invited to join in the fun. Click here to get your tickets now!

What is Ham on Regal?

Ham on Regal is a variety show put on by the parents of Ferris High School students. It is a Parent Teacher Group (PTG) fundraiser to support the school and its students. It began in 1963 when Ferris was first built and is now in its 52nd year. It started when the PTG planned a show to try and raise $1,000 as part of its charter. It grew from there. Over the years, the show has raised more than $1.6 million for school programs.

Tell me about this year’s show.

The theme is “Pig Tales: A Summer Aswinement.” The gist is that kids are returning to school from summer vacation. Their first writing assignment is to report on what they did over the summer. Each scene acts out something that happened on a kid’s vacation. It is a variety show like it has always been. We have 15 scenes with actors. In between there are dance and singing numbers with large and small groups.

It all opens up with a 200 person dance number…. that will be surprise that I can’t reveal!

[I confess, Tom told me what it is. I agreed to keep it under wraps, but must add—it is good. Really good. In fact, it alone is reason enough to buy your ticket now!]

And your starring role?

I play “Melvin the Math Geek” and have my two lines. My wife, Tracy (and Co-Show Chair) plays “Stacy the Cheerleader.”

So tell me about how a show like this comes together.

Each show is a yearlong planning process. The show for next year already has Show Chairs and they are starting to plan. We have over 300 volunteers on 40 different committees all doing different things. There is a committee for script, costumes, music, props, set building, advertising, and hospitality to name just a few. There is also a live band with an arranger to help with the songs.

The script committee starts in April/May of the previous year and is made up of about 25 people. They meet every Wednesday through the summer and into September. They are responsible for deciding the theme of the show, creating the characters, and writing the entire script. Writing the script can be particularly challenging because no one is supposed to be the star of the show and there are nearly 200 cast members with speaking parts. Everyone has about two to three lines. This year they did a great job. The show is goofy and funny.

There is also a head director. This year it is Mark Patrick. His job is to make sure all the parts and pieces of the entire show come together, including music, lights, sounds, dancing, and stage crew. That was my job last year and it’s a big one.

There are so many people who play a role. I think it is amazing because each person matters and makes a difference in what we do in the scope of it all. It is impressive to see it happen–kind of like a machine with many moving parts.

Sounds like people are working together for long periods of time. Do friendships develop?

Community is huge for us too. Our overreaching theme is community. Through the work, parents get to know each other and the parents of their kids’ friends. People come in at the beginning and start kind of on the side lines, but by the end they develop friendships.

Last year my parents attended the show and remarked to a parent volunteer, “It is amazing what you do for kids.” The parent responded, “It is amazing what we do for each other.” Support networks and food trains have grown out of the sense of community this builds. It is important that we support the kids and raise money, but we also support each other. 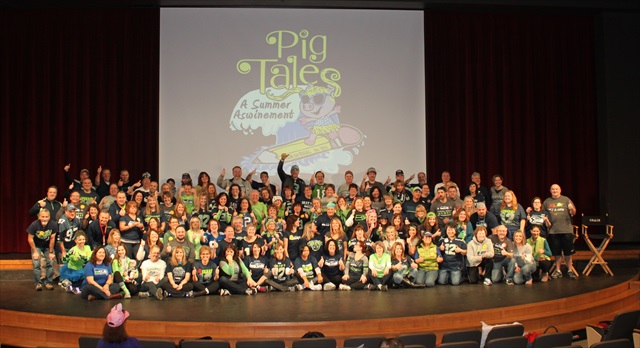 The 2015 Ham on Regal Cast showing off their Seahawk pride.

What are the funds used for?

The school district has resources, but it is a big district and all resources have limits. We provide a supplement. Some support is academic and we help a classroom of kids by providing supplies. Some support is for things like new uniforms.

We helped support the robotics club with funding. The Home Economics department needed little pedestals for the washing machines. A counselor might want money to help distribute information about getting kids into college. We also have a beautiful new school. We want to take care of it, and provide tools for the kids in it. Mostly we help with small stuff, but the small stuff can make a big difference.

How is the money distributed?

If a student group, a teacher, or a coach wants funds, they fill out a request. The request has to include research and spell out what they need and why. Then they present the request to the PTG and funds are allocated.

All funds stay within the school. The ultimate goal is helping kids succeed by providing them with resources that they may not have otherwise. There is a bit of a misconception that Ferris is a rich school, but that is not the case. We raise money to help, but there is always more need than there is money.

How can people support the show?

Parents or guardians must have a current student enrolled at the school to be in a show. Once their child graduates, so do they, in a sense. After graduation, parents can still support the show by becoming a Hambone—a volunteer to help staff the show in the future. My wife attended one of their recent meetings. There were 60-70 people!

Anyone can donate or support us with advertising. It will be new this year, but we’re taking donations at the show too. There will be a large piggy bank in the lobby.

Most importantly, buy a ticket to support the cause. Tickets are on sale now. Buy them online, from cast members or buy them from the business office at Ferris High School. There are also several outlets selling them such as 2nd Look Books and Rosauers.

We are so excited about the show and would like to have as many people as possible come and enjoy it!