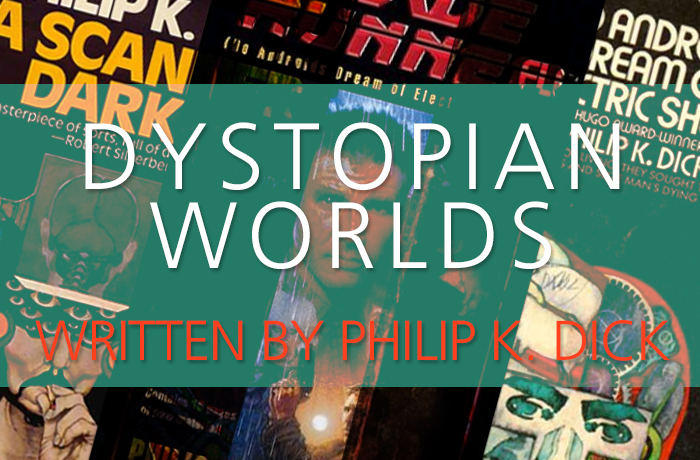 Dystopian fiction seems to be enjoying a renaissance right now, at least in my life. And over the years Hollywood has kept up with the appeal, feeding our insatiable appetite for basic human struggles set against the backdrop of social, political, and environmental collapse that keep us glued to the screen.

I confess I have been escaping into a lot of dystopian fantasies lately, lulled by the idea that the future on the page is a fiction (however closely it mirrors my own fears about our reality). A story is something I can control, or end, even as the words on the page leave my imagination reeling. And there is nothing more pleasurable than comparing my beloved dystopian books to their on-screen descendants. I enjoy assessing the relative merits of each—novel/short story versus film—reveling in some and recklessly disparaging others. Plus the Library District does an amazing job of feeding my need for dystopian worlds.

One of my personal favorite fabulists is Philip K. Dick. His writing has led to some of the most influential science fiction movies of our time. PKD is especially alluring to me for his absurdist sense of humor juxtaposed with his empathetic depiction of outcast protagonists—those clinging to the bottom rung of society, who continue to be exploited in ways known and unknown.

The Man in the High Castle, the Hugo-award winning novel and video series available on Amazon Prime, proves his continued influence. In this PKD universe, he imagined what our world would be like if Germany and Japan had won WWII and the US had become an occupied territory. Now is a great time to grab a copy of PKD’s original vision and see what lessons await us.

The first PKD novel adapted into a film was Do Androids Dream of Electric Sheep? (1968), which became the 1982 cult classic movie Blade Runner. In the story, Earth was nearly destroyed in World War Terminus, and humanity is moving to other planets to avoid the nuclear fallout destroying what little life remains. Offworld humans are served by replicants, which are androids (andys) in the novel. When the androids rebel and attempt to return to Earth, Rick Deckard and his fellow blade runners must permanently “retire” them. Deckard’s career, and maybe his existence, depend on being able to detect the difference between synthetic and human beings. Yet as we read, and watch, this distinction blurs. If he can’t tell the difference, how could we? For another spin on this world, check out the graphic novel illustrated by Tony Parker available on hoopla. It is rumored the sequel Blade Runner 2049 will be out later this year, starring Ryan Gosling, so now is the perfect time to decide for yourself what or who the replicants really are.

The PKD novel closest to my heart, and maybe to his, is the semi-autobiographical A Scanner Darkly (1977). We are submerged into the strange, often alien, landscape of drug culture through the eyes of an undercover police officer, Bob Arctor, who tries to get to the bottom of an insidious drug cartel by living with them and becoming an addict. Do his friends suspect his actions? Is he in control? Or has “Substance D” run through his veins and taken over? Is Substance D a corrupting force or the force that perpetuates the economy on which society thrives? PKD’s haunting afterword to the novel honors all those he knew and lost to battles with drug addiction. The 2006 film adaptation by Richard Linklater uses rotoscope animation to impressive effect, whether depicting drug-addled hallucinations or Bob Arctor inside his scramble suit (a super thin membrane upon which are projected the characteristics of a million different people to confer instant anonymity).

The blockbuster movie Minority Report is based on the short story by PKD, and director Stephen Spielberg let his imagination run wild to create a feature-length film. Police officer John Anderton, chief of the precrime, can predict and prevent all homicides (thanks to the powers of three individuals known as “precogs”). But what are the precogs sacrificing in order to maintain a world free of murder? And what if not all predictions would have come true? I love the way Speilberg injects PKD’s slightly perverse sense of humor to delightful, and slightly nauseating (eye replacement surgery and recovery scenes, anyone?), effect.

Another PKD short story adapted into film is The Adjustment Bureau. Here Hollywood has added the romantic twist that is not in the original. Both contain intimidating bureaucrats in suits attempting to control free will. In the film, I enjoy watching Matt Damon and Emily Blunt fly through shifting cityscapes, attempting to run away with each other. Did you know the original story has a talking dog in it? That is why you should to read the source material for movies! You’ll never know what wild things were left out, if you don’t.