How to Identify a Dragon 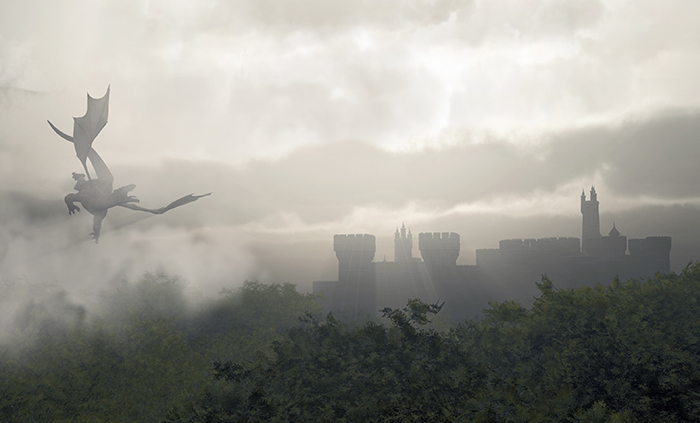 When I was young, I loved C. S. Lewis’s The Chronicles of Narnia. I especially loved The Voyage of the Dawn Treader, a book that, in my eight-year-old estimation, had everything a book ought to: quests, nightmares, magic spells, enchanted islands, warrior mermaids, anthropomorphized stars, and of course, dragons.

Eustace Clarence Scrubb is an individual I find increasingly relatable. Though the other characters are sometimes right to find him snotty, Eustace is also just not especially suited for dehydration at high sea while under attack by a giant oceanic serpent. Who among us can claim to lack such a flaw?

Perhaps the narrator’s most frequent excuse for Eustace’s behavior is his not having read the right books—a failing that leads the hapless Eustace right into a dragon’s lair. As a young reader, I was determined not to fall to such a fate. I would read all the right things, so that if I ever found myself in a fantasy world, I would at least have the appropriate framework for addressing its rules.

Now that I’m an adult, I think all stories can be the “right stories” if approached with a mind that is open to looking through a new and different lens. But I still harbor a special love for fantasy novels, especially the kind of fantasy that engages with our expectations of what the genre should or should not look like.

Fantasy is both hard to define and easy to recognize. Before the term fantasy came into vogue, many books that we would now class in that genre were deemed fairy tales. Even Tolkien himself, often considered the master of fantasy in the English language, marketed The Hobbit as a fairy story.

Now, we argue about whether fairy tales are a subgenre or a separate genre, whether fantasy must include magic or if alternative physics will do, whether magic automatically makes a story fantasy, and on and on. The more you try to pin the genre down, the more it seems to squirm.

I won’t go too deeply into genre debates. If you’re interested in the nitty gritty details of what makes fantasy fantasy, you may want to pick up Orson Scott Card’s How to Write Science Fiction and Fantasy. It offers a wealth of information on writing in the genre, including a pretty good start for thinking about how genres that fall under the umbrella of speculative fiction might be delineated and why.

Dragons make an excellent case study for the problem of defining genre. What is a dragon? Simply a big lizard? In that case, all dinosaur stories are also dragon stories, and stories that suggest lap dragons and insect dragons will have to find some other category to call home.

Does the beast have to breathe fire? Such a definition precludes most non-European dragons, including the much-beloved Haku of Miyazaki’s 2001 film, Spirited Away. Perhaps then, as many modern interpretations propose, a dragon must be a lizard-like creature with any kind of fantastic breath–fire, ice, lightning, acid—but under such a definition why not also rocks, jewels, crop fertilizer, insecticide? Why not music? Why not planets, or lutefisk, or poorly rendered self-portraits?

Our assumptions about dragons are many, but we also seem ready to accept a great deal of play when we meet a dragon in fiction. As long as the creature presents some of the above characteristics and the author calls it a dragon, then I am excited to see what will be new and what is familiar.

To that end, I’ve gathered some of my favorite texts that take the concept of “dragon” and explore its possibilities. 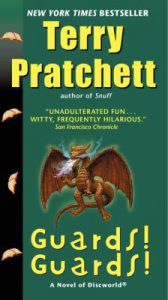 Arguably the king of examining and ratcheting up fantasy tropes, Terry Pratchett takes them to their logical, ridiculous, and hilarious extremes. His take on dragons is no exception. Guards! Guards!, the first book about the City Watch in the Discworld series, revolves around a secret society hoping to use the terrible power of a relatively conventional dragon in order to overthrow the current government. But Discworld has more than one breed of dragon. While the threat to the city is of the noble dragon species, our dubious heroes also encounter swamp dragons: a species of sickly Shih Tzu-sized dragons favored by Ankh Morpork nobility for pedigree breeding. These tiny creatures are known for their terrible intestinal problems due to the fuel they rely on in order to breath fire. Their build-up of flammable gas has a tendency to try to escape through any available orifice. When sneezing, vomiting, and other expulsions don’t fit the bill, explosion is always an option.

A note: while not the first Discworld book ever, Guards! Guards! is one of the first novels in the 41 book series to seriously engage in social commentary, something the author is uniquely adept at. If you’re entering Discworld for the first time and you want something that will crack you up and give you a hard look at the nature of humanity in one go, it’s a great place to start. 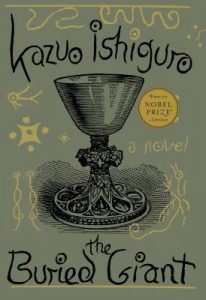 The Buried Giant by Kazuo Ishiguro

Have you ever thought, Why doesn’t a fantasy story ever have a protagonist who is past young adulthood? If so, you’re in luck. Axl and Beatrice, an elderly Briton couple in the post-Arthurian medieval dark ages, slowly realize that everyone in their village, including themselves, seems to have a pervasive, all-encompassing amnesia. They can hardly recall events that occurred even a day before. In the wake of this discovery, they decide to leave the village to visit their son, whom they struggle to remember. As they travel, they find that the entire country, Briton and Saxon alike, experiences the same blanket of amnesia. Amiable and soft-hearted, Axl and Beatrice pick up various companions as they traverse the countryside, including an elderly Sir Gawain. Gawain confides that before Arthur died, he was commanded to slay a dragon, Querig, but he has never accomplished this final task. Something about meeting Gawain gives Axl a feeling of importance, but he cannot think why. Together, Axl, Beatrice, and Gawain travel together toward forgotten son and forgotten foe. Ishiguro’s take on Arthurian mythology offers reality shrouded in magic as a means to examine trauma, memory, and healing in a unique and compelling lens. 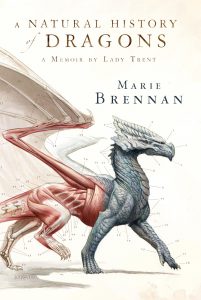 A Natural History of Dragons by Marie Brennan

The gorgeously designed cover of A Natural History of Dragons, which illustrates the musculature and anatomy of the beast in an old field journal style, shows you exactly what story you are getting into. Living in a land that vaguely resembles Georgian England, Lady Trent was forbidden from scientific study in her youth. Undeterred, she secretly collected and classified a species of insect which was later classified as a kind of tiny dragon. In adulthood, Lady Trent goes on to have a number of adventures both at home and abroad, all the while carefully recording the nature of the previously poorly understood beast, in all its forms. Readers are invited to puzzle through what would make it scientifically possible for a creature the size of a house to take flight, breathe fantastic breath, and maintain a formidable defense against hunters. Lady Trent’s dedicated study brings to mind other pioneering women scientists, especially Marie Sibylla Merian, one of the first scientists to observe insects. Beyond offering some fun theories as to the nature of dragons, this book dialogues well with historical explorer texts by offering a smart nod to real world women naturalists and questioning imperialism under the guise of science. 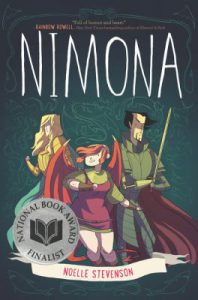 Nimona was the first graphic novel written by Noelle Stevenson, author of Lumberjanes and developer of She-Ra and the Princesses of Power. One of my favorite graphic novels in existence, Nimona consistently takes genre assumptions and turns them on their heads. In a world that effortlessly blends futuristic science and fantasy magic, would-be villain Ballister Blackheart is a one-armed scientist with a heart of gold. His cute pink-haired shape-shifting assistant Nimona just wants to beat up some fascists, maybe in the shape of a dragon, maybe in the shape of a shark—who knows, maybe even in the shape of a half-dragon, half-shark. Together, they hope to show the rest of the world that Sir Goldenloin, Ballister’s arch-nemesis, and Institution where he works for aren’t actually on the side of the people. Stevenson’s characters confront their cultural identities to discover who they really are, to themselves and each other. Although it’s marketed to teens, the easy-to-digest illustrations of Nimona will appeal to middle grade children, and the moral complexity of the characters and plot can fully engage an adult reader. 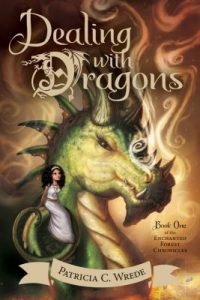 The first book in the Enchanted Forest quartet, Dealing with Dragons opens with Cimorene, a princess who runs away to apprentice under a dragon rather than wait to be married off to someone she doesn’t like. Cimorene is sassy and clever, and the dragon Kazul turns out to be an affectionate if exacting teacher. Cimorene learns more than just Latin and fencing from Kazul’s hoard of books. She also learns all about dragon culture: their culinary tastes, their government, and their views on gender. As they grow to become friends, Cimorene and Kazul uncover a group of distasteful wizards with suspicious motivations, just as dragons start falling ill. Funny and fast paced, this book is slotted for middle graders, but it unravels genre expectations enough to be a quick, enjoyable for teens and adults, which makes it a great family read-aloud. 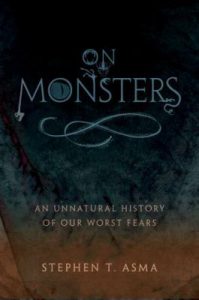 On Monsters: An Unnatural History of Our Worst Fears by Stephen T. Asma

Though not strictly about dragons, Asma’s On Monsters is an excellent dive into what makes us afraid and how our fears manifest in stories. Asma postulates that monsters offer concrete symbols of everything from vague anxieties to deep-seated societal phobias. Analyzing monsters, then, can provide information about the culture and era of those monsters. While Asma discusses pretty much everything, including vampires, gorgons, robots, and demonized groups of people, his analysis offers a great entry into considering what a dragon might represent in a given story and why the author may have chosen to make any changes to established conventions. It’s also just a great book for anyone wanting to examine their assumptions about monsters and people, too.

Did I miss one of your favorite dragon-related books? Have a different dragon definition? Share your thoughts on dragons and dragon stories in the comments below. I’d love to hear what you think!