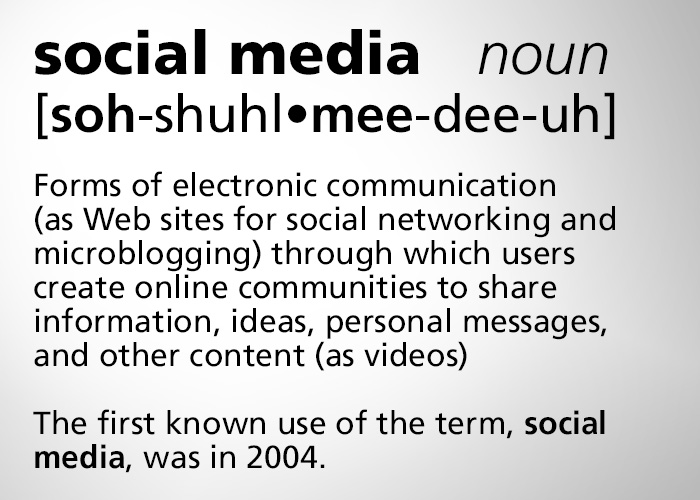 Wow. The first known use was in 2004! In ten short years, there has been an explosion of social media platforms. Today, everywhere, people are posting photos and videos, checking-in, and sharing info. It’s even been suggested that the word “social” could be dropped, as this form of communication is the traditional media. I found this interesting as I find myself getting more and more of my news through social media, and I notice that when I do watch the local newscasts, they spend time reading off Facebook comments about the headlines.

I used to love Facebook. It was my first experience with social media. It was an exciting time to go online and see my friend’s statuses, post photos, and comment. The combination of socializing and technology was fascinating. Before coming to the library, I had landed a social media marketing role in a large company. Facebook was tops in the social media world at the time, but right behind came Twitter, Foursquare, Yelp, Urbanspoon, Google+, Instagram, Path, and more. Social media became a job, more concerned about organizational transparency and customer service than just fun interaction. There were trolls and haters to deal with (or ignore), social media policies to observe, fan-gating, strategies, and best practices to follow. Being on social media as a representative of my employer was much more stressful than expressing myself with friends. It took the fun out of it. Now, a few years later, Facebook remains at the bottom of my list of preferred platforms.

Having dipped my toe in the ocean of so many different social media ponds, I’ve learned that I have unique uses and relationships on each platform. Here are a couple of my favorites:

Twitter is my all-time favorite of the social media platforms. The limit of 140 characters lends itself perfectly to making my point in a concise and often creative manner. It seems to me to be the most social of all, as I can start or join a conversation around a topic, and am not limited by only those in a limited circle. I can tweet my favorite band about their new song, use a hashtag to talk with others in real time about a TV show, share articles of interest, and even interact with the author.

I’ve meet new friends on Twitter and later met in person, gotten book recommendations from a follower in England, been warned of traffic jams to avoid, and laughed at silly jokes. 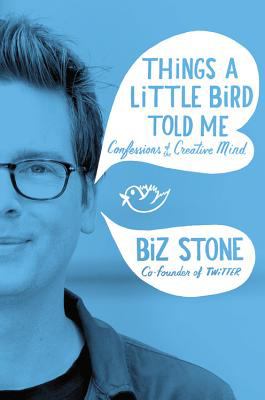 Biz Stone, co-founder of Twitter, inspired me to like Twitter even more in his recent book, Things a Little Bird Told Me: Confessions of the Creative Mind. He writes of creativity and going with the flow, “If we think we know what will come next, we’ll fail. Instead, we need to leave the door open for unknown developments and surprises. Some of Twitter’s most popular features—hashtags, @ replies, retweets—were, by and large, created by users. We didn’t know they were going to emerge. By being open to the unknown, by not forcing our will on vision just because it was ours, by watching what people were doing and looking for patterns, we were able to build a service whose function matched the way people wanted to use it.”

That’s the key to finding the social media option that is best for each person—its function matches the way we want to use it.

One of the more amazing social media stories to watch has been Pinterest. It was not long ago that you had to be invited to join Pinterest. But as its popularity exploded, the service has matured nicely. Pinterest is the go-to for inspiration and the sharing of creative ideas. When I decided the blinds in my kitchen window were, well, blah, a few minutes on Pinterest sparked creativity. In less than one hour I went from no ideas to a trendy window dressing for zero dollars. At the same time, I found another great idea and tossed in a quick valance made from an old bamboo shade for the guest room, also zero dollars.

I find Pinterest so addictive that I have imposed self-limits on how much I will pin. Pinterest must have known this as they have added private boards so I can save and organize so much inspiration from the web all in one place (unbeknownst to anyone else). The folks at Pinterest seem to have taken a lesson from Biz Stone and watch how people wanted to use their social network.

I would be remiss not to mention LinkedIn, a networking site that seems to be the true essence of professional networking. There’s a bit of socialness, but here: your resume is your profile. LinkedIn users can connect with introductions and can find jobs and business opportunities. You can even follow different companies and be notified of job openings. If you’re a professional, and you are only on one social network, I recommend LinkedIn.

I like to think of social media as a cocktail party. You mingle, chat with others, find out about them, share a little of yourself, and get to know others a little better—you develop a sense of community.