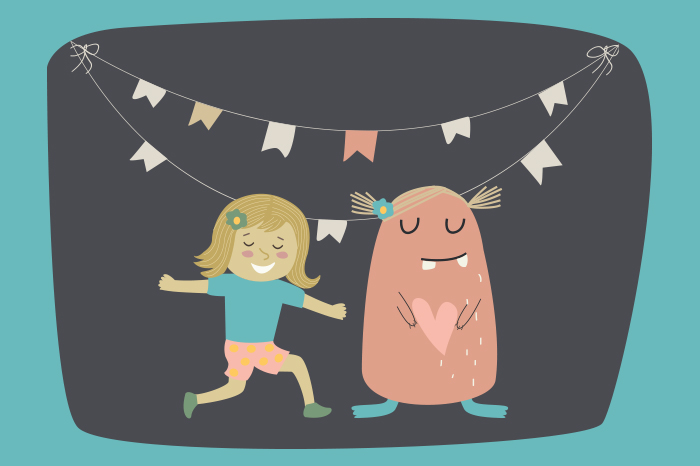 “Mom, did I ever have an imaginary friend?” I click my pen and wait for an answer, aware that this very blog post was due three hours ago and I need some way to introduce it. But alas, Mom is no help. “No, honey. Your sister had Paul,” (Paul being a plush gorilla who had to be thrown out when half a banana rotted behind his lower lip) “… but neither one of you had imaginary friends.”

This news surprises me. I figured of course I’d been the kind of kid to have an imaginary friend. But maybe I never needed one. After all, I had a little sister, and while – at two and a half years younger — she lacked the motor and conversational skills to be my ideal companion, she could be convinced to put plastic training pants on her head and walk around proclaiming herself “Princess Babypants.” That was probably enough for me.

In spite of my own dearth of imaginary friends, they’re certainly having a moment on the “new arrivals” shelf at the library. In the past year I’ve noticed a lot of books about imaginary friends coming through and there are probably even a few more I’m missing. The University of Oregon even has a field of study devoted entirely to this topic called the Imagination Research Lab. As researcher Marjorie Taylor points out in the introduction to her book Imaginary Companions and the Children Who Create Them, “The creation of an imaginary companion is healthy and relatively common.” Here are some recent titles that celebrate this unique stage of child (and sometimes adolescent) development:

With his dashing black hat, his skull-and-crossbones shirt, and a pair of super sharp swords, Brock is quite an impressive sight. Unfortunately, the only one who can see him is his best friend, Phillip. A little thing like invisibility isn’t enough to keep these two friends apart, especially when they’re having so much fun at the county fair. But when Phillip’s parents decide it’s time to go home, Phillip realizes – too late – that Brock got left behind. Luckily Brock is nothing if not resourceful and soon makes friends with a little girl named Anne — who has a very special friend of her own named Princess Sparkle Dust. Full of emotion and silliness, We Forgot Brock! is as empathetic as it is entertaining. 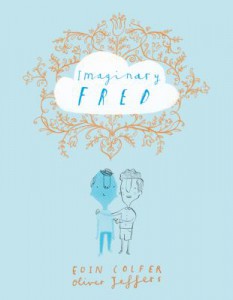 Composed almost entirely of tiny aqua Ben Day dots (the kind that you often see in comics), Imaginary Fred floats “like a feather in the wind” until he’s needed by a lonely child. Once he makes his presence known he becomes the perfect friend – taking whatever form and attributes the child wishes. And when he’s no longer needed he evaporates to just the barest wisp of an outline. When he is summoned by a little boy who shares all of his own interests (Music! Reading! Drama!), Imaginary Fred wonders if he might finally have a friend of his very own, but what will happen to Fred if his new friend starts to outgrow him as well?

It’s been three years since Jackson last saw Crenshaw. And yet here he is again, seven feet of smart-alecky, jelly bean-loving, feline companionship. For Jackson, a fifth grader who prefers nonfiction and facts to flights of imaginative fancy, it’s a worrisome reunion – after all, the last time he saw Crenshaw his family was struggling financially and they’d even had to live in the family minivan. And come to think of it, Jackson has noticed some discomfiting signs – stacks of unpaid bills, his usually loving parents arguing, never quite enough food. Could they be headed to homelessness again? Katherine Applegate writes a story grounded in uncomfortable reality and leavens it with hope, suggesting that Jackson will find a way through his family’s tough situation and maybe it won’t even take a seven-foot tall imaginary cat to make things right. As Crenshaw says, “Imaginary friends don’t come of their own volition. We are invited. We stay as long as we’re needed.”

Ryan is a papercutting artist who’s designed some of the most striking book covers in recent memory. In his first picture book he introduces us to a young prince, who lives in a tower in the middle of a city with only the company of his tutor, Lord Von Dronus. When the prince discovers a secret escape portal in the castle he ventures forth to discover all the dangerous and chaotic magic the city has to offer. His escape is discovered and he’s brought back to the castle, but not for long as this is the first of three planned volumes. This is a great cross between a picture book and a graphic novel for middle grade readers.

Confessions of an Imaginary Friend: A Memoir by Jacques Papier

Jacques Papier doesn’t know he’s imaginary. Sure, he’s not very memorable – teachers never call on him, the bus driver often shuts the doors on him, and he’d be happy to be picked last for kickball (because it’s better than not being picked at all). A chance encounter at the playground reveals that his “sister” is actually just a human child, and that he is – gasp – just her imaginary friend. Heartbroken, Jacques joins Imaginaries Anonymous and sets out on a funny and convoluted search for a place to finally call home. This middle grade novel mixes humor, absurdity, and a surprising sense of poignancy for a deeply satisfying read. 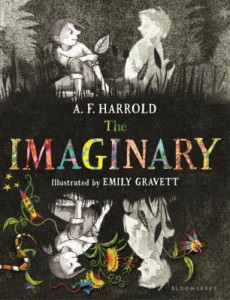 What happens to our imaginary friends when we are older and can barely remember them? For an Imaginary, it’s their worst fear made real. Rudger is an Imaginary with a lot on his mind. His human, Amanda, is in the hospital and because she hasn’t been thinking of him very much he’s worried that he’ll start Fading. There’s also the dreaded Mr. Bunting, a ghastly being who seems human but actually eats Imaginaries. Is there anything an Imaginary can do to keep existing? With comparisons to Neil Gaiman and Roald Dahl, Harrold creates a dark and wondrous fantasy tale, while Emily Gravett’s illustrations strike just the right Edward Gorey-esque note.

If there’s such a thing as fate, 17-year old Calvin seems to be experiencing it – maybe. Born on the day the last Calvin and Hobbes comic strip ran in newspapers, he is named after the fictional Calvin and his first toy is even a stuffed Hobbes. Not to mention that his childhood best friend is a girl named Susie. But where the comic strip Calvin romps with his tiger pal on an endless outdoor afternoon, the real world Calvin has schizophrenia and has just ended up in the psych ward. Believing his mental illness will be cured if he can just get Calvin and Hobbes creator Bill Watterson to do one more strip, Calvin sets out with Susie on a dangerous journey across frozen Lake Erie from Canada to Cleveland. Despite the whimsical premise, Leavitt crafts a touching novel about both mental illness and how much stories (even those in comic strips) can mean to us. 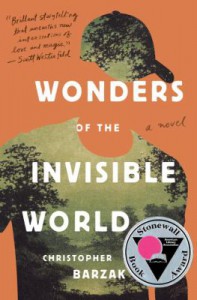 Wonders of the Invisible World

To Aiden, living an unremarkable life in an unremarkable town, “we’re all as thin as paper.” But when his former best friend Jarrod returns to town, Aiden’s life is suddenly thrust into three-dimensional high relief. Like waking up from a dream, Aiden is confused that Jarrod remembers things about Aiden that he doesn’t remember himself. In fact, something about Jarrod seems not quite real. Fortunately, for the reader as well as Aiden, he is very much real and holds the secret to Aiden’s haunted past and his family’s tangled legacy. This mesmerizing story of old curses, ghosts, and new love isn’t about invisible friends per se, but about the world beyond what we can see and touch. Recently named a Stonewall Honor Book, Wonders of the Invisible World is a tender, sometimes terrifying story.