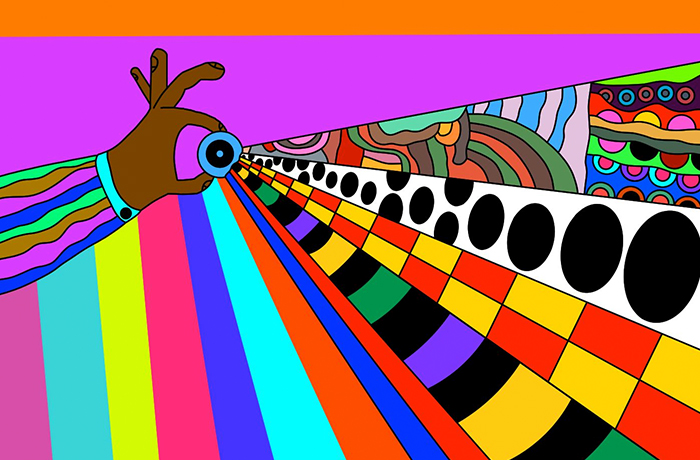 When walking into the Airway Heights Library, colorful art welcomes you from the display case. You’ll see record albums, clocks, people, keyboards, and cats in a kaleidoscope of vibrant colors. Inside the library, you’ll see even more artwork along the wall in the children’s section—each tableau intricately detailed and evoking a story, or an entire world. 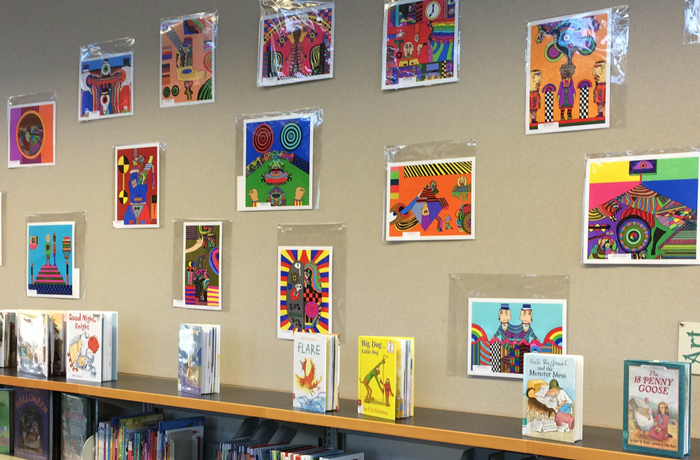 James Frye is the artist of these works, which will be on display through October 1. And like his own family, you may wonder where his color inspiration comes from.

When his father asked, “How do you choose your colors?”, James replied, “I hear the colors.” In that moment, James learned that his ability to hear color, also called synesthesia, is not all that common. And both of his parents learned and understood more of how the world of sound appears in James’s mind and translates into his art. While rare, scientific studies are showing that synesthesia may be more common that previously predicted at 0.05% of the population.

While in school, James drew every morning. With his mother’s encouragement, his teachers over the years helped collect and keep his drawings in journals (instead of tossing them in the waste bin). Wendy (James’s mother) recalls many of his first drawings had hands in them. A recurring theme in James’s most recent work as well.

Besides art classes in school, James hasn’t had any formal art training except for one watercolor painting class. He graduated from high school with the Superintendent’s Achievement Award. And after graduating, James declared that he is an artist and art is the profession he will pursue.

Wendy, who spent many years in the finance and banking industries, decided to lend her support by becoming his business manager. She sets up exhibitions, works with art curators and other groups, coordinates commissioned work, sells his work at local events, and manages his website and other online retail sites.

Since graduating high school, James has focused on creating art on an electronic sketchpad and then adding the color digitally. In some cases, he creates a piece of art and then later will create the companion piece. Each piece of art takes about one month to create. James researches his subject, listens to an eclectic mix of music, sketches and colors, and then after much thought names the piece.

Music is a big component of his art. Growing up, James listened to his father’s collection of vinyl records that included The Beatles, The Rolling Stones, The Who, and many other bands and musicians from the 60s and 70s. In fact, James calls himself a “futurist throwback artist.”

Just as music translates into art for James, some musicians are drawn to his artwork. The band My Morning Jacket commissioned James to create the limited edition poster for their album, “Waterfall.” Other artists have reached out to James and Wendy for possible art commissions, as well. 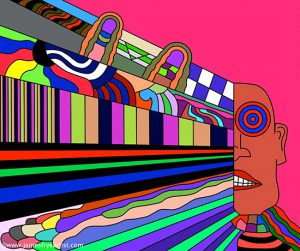 You can find James’ artwork for sale on his website. His artwork has been displayed around Spokane at different venues, including the Kress Gallery. You’ll see Wendy at local events selling his artwork, like she did at the Bazaar at Terrain this last June. Recently, an art curator selected some of James’ artwork for inclusion in a private art exhibit in Washington, D.C.

James has had his artwork incorporated into textiles, specifically clothing and accessories with VIDA, a collaboration between designers and makers around the world, bringing original, inspiring apparel and accessories to the public. His artwork is also available on We Are Lions, a website of “extraordinary art made by extraordinary people.” 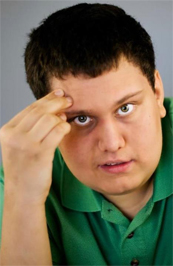 As a young child, James had many physical ailments and illnesses, often misdiagnosed. To see him today, standing at over 6 feet tall and over 200 pounds, hardly anyone would suspect that health was a serious concern during his first years of life. At three and half years of age, James was diagnosed on the autism spectrum. He joins a list of artists, inventors, engineers, writers, and great thinkers who have been diagnosed or were believed to be on the autism spectrum: Michelangelo, Mozart, van Gogh, Thomas Jefferson, Charles Darwin, Albert Einstein, Nicola Tesla, Stanley Kubrick, and Temple Grandin—to name but a few.

It’s an impressive list to be sure. And you won’t want to miss the exuberant art of James Frye, synesthete and futuristic throwback artist, showing now at Airway Heights Library.