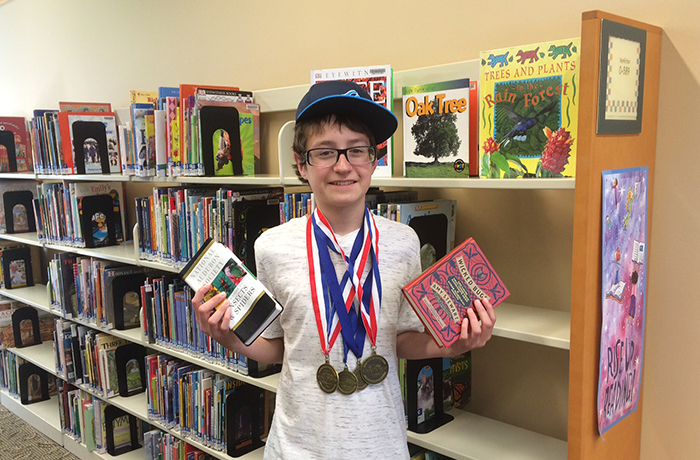 Whenever I see an amazing craft or find a new interest, I know I can head to the library and find tons of books and other resources—whether it’s knitting, cooking, or coding a smartphone app. So I knew I had found a kindred spirit when I heard about a young library member who has a voracious mind, an interest in nature, and isn’t afraid of using his library card.

Isaac Garza, along with his science partner, won first place in Entomology at the regional and state levels of the Washington Science Olympiad, two years in a row, while studying at the Odyssey Program. Competing students had to identify insects and answer questions about the insects—such as its scientific and family names, prey, predators, food, and so on—in order to earn points in the competition.

During the competition, students were allowed to use the National Audubon Society Field Guide to Insects & Spiders for reference. But Isaac had checked the book out regularly from the library, and later received it as a gift, so he attributes winning to the fact that he already memorized much of the knowledge about insects before competing.

While his curious mind, sharp memory, and love of insects were the key factors in his success, his mom shared with me that “without the library he probably wouldn’t have done as well. He’s one of those kids that checks out 30 books at a time.”

As I was listening to Isaac talk about Wicked Bugs: The Louse That Conquered Napoleon’s Army & Other Diabolical Insects by Amy Stewart, I became fascinated and could relate to his enthusiasm. Isaac shares stories from Wicked Bugs that sound like plots for horror movies: zom-bees, parasitic wasps controlling cockroaches, the most painful hornet stings. 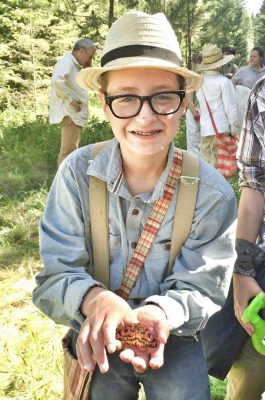 His interest in insects doesn’t stop at reading and competitions. Growing up, Isaac would capture insects, photograph, and video them.

Isaac shared about the time he decided to gather over 50 millipedes over the course of several weeks in a small, portable terrarium at home. He didn’t tell anyone—to the chagrin of his mother—about this scientific endeavor and decided to keep the contained swarm under the ottoman in the living room. One afternoon his family was hustling to get out the door for an outing when the terrarium was unknowingly knocked over. Let’s just say that everyone came home to a surprise invasion! Isaac diligently recaptured all of the millipedes and set them free back into nature. He also promised to never collect so many insects without letting his mom know! 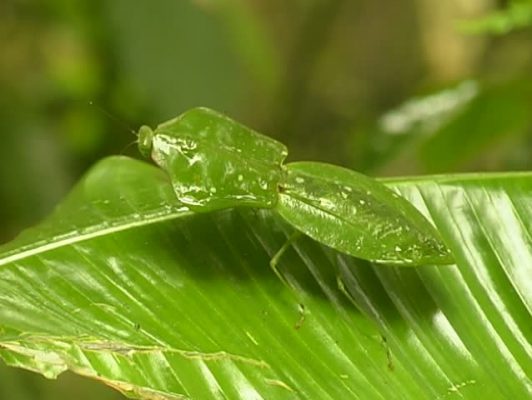 It is common for most folks to have a keen eye for pennies on the ground or perhaps to spot a Starbuck’s sign from blocks away. Isaac has a keen eye for insects. What may just look like a lovely green leaf to you and me is a leaf mantis that Isaac would likely spot with ease.

When asked, Isaac readily shares that beetles are in fact his favorite insect. “They are the tanks of the bug world. They have two sets of wings. The harder elytra wing protects their flying wing underneath, like a shield.”

All of this curiosity also led Isaac to sharing his passion with others. His younger brother was in preschool when Isaac brought a terrarium—this time filled with water and diving beetles captured on vacation—to share with the class. He talked about how the beetles were able to capture air bubbles with the tiny hairs on their abdomen and hold it under their wing casings, so they could breathe underwater. He showed the preschoolers how the beetles dove down like scuba divers into the water. All of those little bugs zooming through the water were a fascinating dance for all of the kids that day!

But bugs aren’t his only passion. Isaac enjoys all of the life sciences—birds, fish, mammals, ocean life, and even exotic plants—like those that eat flesh. Wicked Plants: The Weed That Killed Lincoln’s Mother & Other Botanical Atrocities by Amy Stewart is another of Isaac’s favorite books. His other interests are Minecraft, Star Wars, and comics—both DC and Marvel universes. All with titles available for checkout, either in print or digital, at the library. Plus with his library card, Isaac has access to our great digital resources, such as Science in Context and World Book Web.

Right now, Isaac is intrigued by cyber security, though he is considering a career with the U.S. Fish and Wildlife Service. We look forward to hearing where his interests lead him next!