When the Academy Award nominees for best picture were announced earlier this month, I had a strange sense of deja vu. It was not because of the continued lack of diversity in actors nominated or list of films many people won’t see. What was so familiar was that nearly every nominated film owed its existence to a book, whether it was a direct adaptation or “inspired by true events”. Of course, this trend is nothing new. Sherlock Holmes has been on film for nearly as long as celluloid was an artistic medium and classics like Gone With the Wind, The Godfather, and Lord of the Rings: Return of the King have all won the coveted prize for best picture. This year the nominated films are almost all based on books. 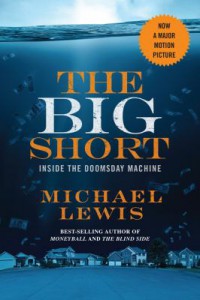 The Big Short is the first of several nonfiction titles this year that inspired film adaptations. The story tackles the financial crash of 2007–2008 through Lewis’s focus on the lives of outsiders who saw it coming. Lewis, who has written other books from his perspective as a disillusioned financial insider, is just the author to navigate the complexities of this topic. DVD

The story of a quiet Irish girl who immigrates to America in the early 1950s is quite the change of pace from the rest of these stories. We see Eilis make her way to Brooklyn and the wide world that she was sheltered from in her small Ireland village. Brooklyn seems to be the closest thing to a feel-good story this season. 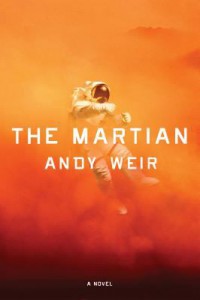 The Martian is a lot like Robinson Crusoe in space. Stranded and assumed dead, a botanist must “science” his way to survival on Mars. The story is fast-paced, laced with humor, and the science is mostly there, at least more so than many sci-fi stories that make it to film. If you’d prefer to watch Matt Damon struggle for his life, the film version is already available on DVD.

It’s rare for a western to be nominated for best picture, let alone win (only 4 have ever won, bonus points is you can name them). The Revenant is another story of survival. Hugh Glass, the main character, is mauled by a grizzly bear and left for dead. Lots of grit and hanging on for dear life ensue, but with significantly less humor than The Martian. You’ve been warned. 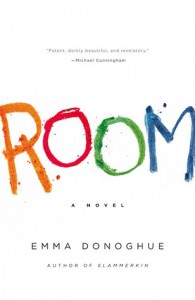 In this aptly named story, a mother and child have been held captive for years in a small room. As the child grows older, the assumption that all that exists is the room begins to fall away. Despite the disturbing premise, there are glimpses of hope and beauty in this provoking book. DVD

Strangers on a Bridge

This 1964 true-life thriller was the inspiration for the movie Bridge of Spies. In his book, Donovan recounts the exchange of political prisoners at the Glienicker Bridge in 1962. While this exchange is not the sole basis of the movie, it is accurately depicted. 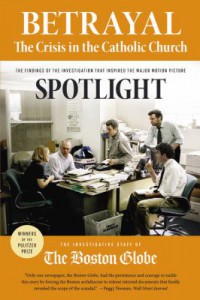 Betrayal: The Crisis in the Catholic Church

By The Investigative Staff of the Boston Globe

Betrayal is the product of the Boston Globe’s investigation depicted in the film Spotlight. Winner of the Pulitzer Prize for Public Service, this book provides an in depth look at the Globe’s collective findings, which exposed the sexual abuse and cover-up scandal in the Catholic Church to the world.

Yes, the only wholly original film nominated for best picture is the glorious return to a decades old franchise. Part of what makes The Art of Mad Max: Fury Road so appealing is its craftsmanship. This oversized art book features stills from the visually striking film, conceptual sketches, and commentary on the making of the film. George Miller and company built as much of the movie sets and props (that guitar was literally throwing flames) as they could. Don’t miss this interesting read. DVD

What movie is your pick for best picture? Share with us in the comments below!