Picking Up the Park 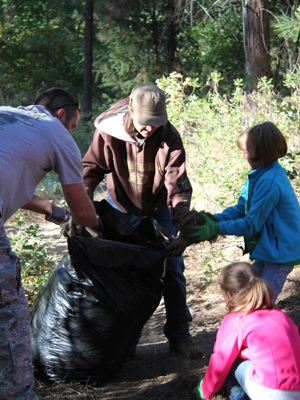 Earlier this fall I joined fellow SCLD staffers Amber Williams, Kris Barnes, Judy Luck, and close to 100 volunteers in an ambitious project to clean up the wooded lot behind the Deer Park Library. The story of how this all happened is one that’s being similarly played out in libraries all across the United States. I’ll get back to the bit about the underpants, I promise. But first, some backstory:

A year ago, the Spokane County Library District embarked on an intensive, year-long Innovation Initiative to really understand our ten library communities and their interests and needs. We looked at demographic profiles, held community meetings, and brainstormed service ideas.  Each of our ten libraries was assigned its own 3-4 person team, usually comprised of the librarians and managers that worked there, but in some cases (Deer Park being one) they were assigned a few behind-the-scenes folks like me. Each team was charged with discovering the needs of its own community, identifying partners, and coming up with a specific project meant to encourage collaboration and meet a community need. All of this fell under the bigger umbrella of our three-year Community Impact Plan, which you can read more about here, and is indicative of an exciting trend in which libraries all across the United States are working to involve themselves in and transform the communities in which they’re situated.

As we began to come up with a project idea, the solution was literally right outside our windows. The woods adjoining the Deer Park Library are picturesque from the comfort of the library chairs, but as we toured the site alongside aspiring Eagle Scout Justin Carbary and Spokane County Parks Planner Paul Knowles, we realized the park could really use our help. Nearly three acres in all, the lot was first transformed into an exercise game field by former Deer Park hospital administrator Bob Brown in the mid-1980s. It featured a mile-long running/walking trail and strategically placed exercise stations, some of which were still rusting away in the weeds. Providence Health Care donated the park area to the City of Deer Park sometime in the mid-1990s (around the time that the new Deer Park Library was being planned and built on the adjacent property) but when Providence Health Care and Hospital closed their doors for good, the rest of the hospital property went up for sale. Some more adjoining land was sold to the Deer Park Family Care Clinic (which very generously donated $700.00 to the park clean-up effort) but there were no clear lines of demarcation in the park and no real sense of whose responsibility its care fell to. By the time we walked through, there were several massive Ponderosa Pines down on the ground, lots of overgrown brush, piles of yard waste throughout the property, and pockets of unsavory human activity ranging from litter to evidence of illicit (and ill-advised) sexual congress. 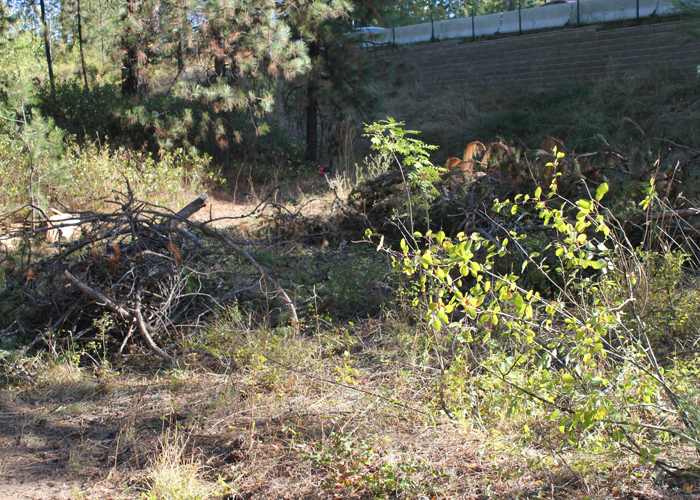 We already had two great community partners in Paul Knowles from the county Parks Department, and Justin Carbary, who needed a worthy project in order to achieve Eagle Scout status. But as we were still planning, another major windstorm swept through the area, knocking down even more trees and making a few unsafe to leave standing. We were clearly gonna need a bigger group. Word got out, and the Deer Park and Clayton Wards of the Riverside Church of Jesus Christ of Latter Day Saints came on board, deciding to adopt our project for their annual day of service project.

Our official Clean Up Day, Sept. 13, 2014, was astonishing. In addition to the volunteers from the LDS church, we had help from neighbors, Kiwanis and Rotary members, Boy Scouts, and the Friends of the Library. Our final count was 102 people, many of whom brought their own equipment, ranging from gloves and rakes to Kubota tractors, brush hogs, chainsaws, and protective eyewear. Some groups focused on cutting up the fallen trees to make firewood to be donated to widows and widowers in the community. Some worked on pulling up the old, rusting and broken exercise equipment. Some created huge slash piles of dead tree limbs and other forest debris. And a few of us picked up garbage along the trails (which is how Kris found some icky, abandoned underwear—thank goodness for latex gloves!) In the end, clean up took just over three hours, and yielded more than 150 bags of debris to be removed. Most of all, it was so inspiring to see that many people giving up their Saturday morning to make the park more walking-friendly for the benefit of the entire community. Here’s a little video of our before, during and after (including the underwear evidence).

Our park makeover is by no means over, but the hardest part is already behind us. The next steps include GPS trail marking by our Eagle Scout candidate, Justin, the slash piles will be wood chipped and left behind as a natural weed barrier, and Paul Knowles will create a trail map and signage. The LDS church will also return each year on their annual day of service to ensure that the park stays well-maintained. Down the road, we’re hoping to install some benches and have a formal dedication ceremony. In the meantime, if you happen to be in Deer Park, be sure to visit our park-behind-the-library and let us know what you think!