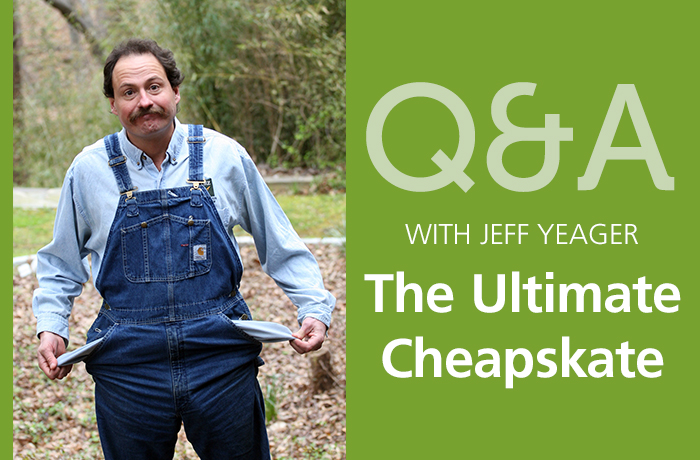 We’re keeping it frugal with Jeff Yeager, The Ultimate Cheapskate. In April during Money Smart Week, Yeager presents “Finding Wholesale Happiness in a Retail World” at three locations (see locations, days, and times below), offering practical advice about how to live a happier, healthier, and fuller life—only if you are not willing to pay the price.

In this Q&A, Yeager shares the most common questions he gets from people and his advice (each in a nutshell). Expect even more details, examples, props, and fun when The Ultimate Cheapskate stops by Spokane to share his money-smart knowledge with us all!

Usually when people think about saving, or being thrifty, they think about having to make sacrifices or give things up. You say that spending less can actually make people happier. Would you share more about that?

Yes, it does seem like a paradox, since we’re condition through advertising and peer pressure, and in other ways, to think that buying more stuff and having more money will make us happier. But social science has proven time and again that once you’re comfortably above the point of abject poverty, there’s really no correlation between how much money and stuff you have and how happy you are. There are also a lot of studies that show, at least in America, we eventually regret nearly 80% of all the discretionary things we buy and that debt and other financial problems are making us extremely unhappy. So, by spending and consuming less—simply figuring out what that 80% is going to be before you buy it!—most people would actually be happier.

What prompted you to begin living this frugal lifestyle? Was there a specific trigger or event?

I’m 59 years old and grew up in a lower-middle income family in the rural Midwest, in a place and time when you didn’t spend money easily, largely because you didn’t have it to spend. And while later in life I started getting caught up in the trap of spending and consuming more and more, I eventually realized that it wasn’t making me any happier—in fact, just the opposite—so I started getting back to my roots and living more in the way I was raised. In part this was triggered by meeting some very wealthy people through my job and realizing that they were in many ways miserable and wasting all of their precious time here on earth chasing after ever more money and stuff, even though they already had more than anyone could possibly need or reasonably ever want.

How does your wife Denise feel about you being The Ultimate Cheapskate?

Although I make a lot of jokes about my “pooooor, long-suffering wife” in the books I write, the reality is that we’ve been happily married for 30 years, in part, because we have similar views about money. That’s not to say that she’s as frugal as I am, but we both understand and appreciate the fact that money can’t buy happiness and that there’s a big difference between amassing a quantity of stuff verses a quality of life. We’d rather spend and consume less so that we have more time and the financial freedom to do the things that really add value to life.

What has this lifestyle afforded you? What have the benefits been?

The main thing is that when you spend and consume less—and smarter—you don’t need to spend so much time working to get more money. So, you gain financial freedom and the luxury of free time. The upshot of that is that we both essentially retired when we were still in our forties—with the luxury of working whenever and at whatever we like. It also gives us more time and more treasure, if you will, to share with people who truly need it more than we do. Another example is that we love to travel—on the cheap, of course—so we now have the time, and by prioritizing our spending and not wasting money on other stuff, we have the financial freedom to travel the world for about two or three months out of the year.

You coined the term: fiscal fast. What is it and what advice do you share with people who might want to start one?

The idea is to go for at least a week every year without spending any money. It’s like spending detox. Use up food and other stuff you have on hand. Try carpooling to work. Make your own fun as a family, rather than paying for entertainment. It will help you do three things:

Is there something you’ve had to give up that you miss or wish you could have or do?

No, not at all. By far the single biggest thing my wife and I have “given up” is we spend considerably less than most of our peers in interest. The average American now spends more than $600,000 during their lifetime on interest! We live by the old school rule: “If you can’t afford to pay for it now, you simply can’t afford it.” So, we set our priorities on the things that we truly want out of life, and we don’t waste money on other stuff. Essentially, we save up the money we need to pay for something before we go out and buy it. While it may mean that we have to wait a bit longer to get the things we want, in the long run the quality of our lives—and our stress levels!—are so much better than most peoples’ because we’re not spending that $600,000 in interest.

What do you consider the most extreme cost-cutting measure you have ever taken to save money?

Oh, I don’t know. To me, the things I do don’t seem extreme, even though I guess they are by most American standards. As viewers saw on the show Extreme Cheapskates, I eat some pretty strange stuff, but, again, it’s mostly stuff that’s only strange to other Americans. And I can’t pass up the chance to look for loose change in public places—I’m like a human metal detector!—but that’s just hobby of mine. You’ll also see from the show that I ride my bicycle a lot, nearly 100,000 miles so far during my lifetime, both to save money (by my calculations it has saved me more than $50,000 compared to driving a car to cover those same miles) and to stay healthy. It’s also just something I find incredibly enjoyable, so I don’t consider it extreme.

What are a few quick and easy tips that people can use to start saving some money right now?

There a ton of easy, painless ways to save money, as people will learn during my upcoming talks. Here are some things to try:

Get expert tips from Jeff Yeager in person April 22–24, 2017, at “Finding Wholesale Happiness in a Retail World”: 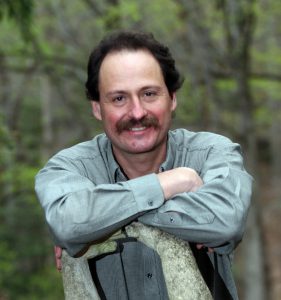 Jeff Yeager spent 24 years working as a CEO and senior executive with national nonprofit organizations in Washington, DC, before launching his career as an author, freelance writer, media personality, and public speaker in 2004. Because of the experience he gained as the self-proclaimed “Titan of Tightwads” in the nonprofit sector and the positive impact those same management techniques had on his personal finances, Yeager realized that he had reduced his dependency on money to the point where he could retire, or rather, as he likes to say, become “selfishly employed” and free to pursue whatever interests he chooses, without inordinate worry over a paycheck. Yeager is the author of four books, including The Ultimate Cheapskate’s Road Map to True Riches: A Practical (and Fun) Guide to Enjoying Life More by Spending Less, serves as the official “Savings Expert” of AARP, and is a recurring cast member of TLC’s popular series Extreme Cheapskates.