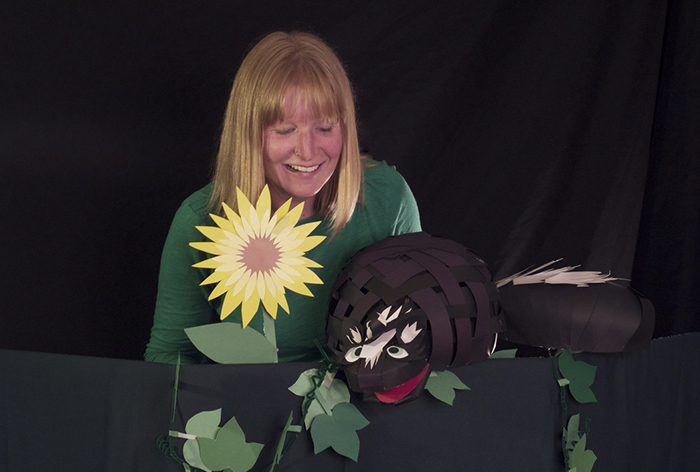 When we learned that KCPuppetree would be performing this summer, we were excited to learn more about the worlds of theatre, storytelling, puppetry, and art made with recycled materials. Kelly Campbell was gracious to indulge our curiosity and answer questions about her world and art. 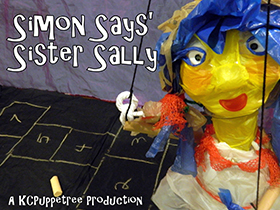 Families of all ages won’t want to miss KCPuppetree, performing Sally Says: Simon’s Sister Takes Over (a.k.a. Simon Says’ Sister Sally) at all 10 District libraries starting Monday, June 20, through Friday, June 24. Check out our 2016 Summer Programs for a time and location near you.

What was your career path to becoming a puppeteer?

I can say it all really started thanks to my mom. As a kid, my parents enrolled me in everything, including theatre and art. While I enjoyed sports, the areas of theatre, singing, and art are where I excelled. I pursued theatre throughout my young life, and earned a degree in Theatre from Sonoma State University (California). During my last year in college, I took a semester intensive with a puppetry troupe from San Francisco: Lunatique Fantastique. While many of my peers complained, I absolutely loved it.

In 2007, I moved to Portland. At first I wanted to be a farmer/gardener, but I couldn’t leave my passion for theatre behind. In 2009, I got a job with Portland’s Tears of Joy Theatre, a 47-year-old, nationally recognized puppet company. I began by teaching after school classes for Tears of Joy, then eventually was cast in several puppet shows, one-person plays, and even went on tour three times throughout the Northwest.

In 2012, I started developing my own material independently of Tears of Joy. A friend and I received a grant to develop a program focusing on waste management education, and we created a silly musical puppet show for a local school. Inspired, I continued to develop more original puppet shows and started to connect to local libraries, schools, and venues. KCPuppetree was born!

I continue to still teach and perform with Tears of Joy Theatre (they just recently toured to Spokane in 2015 with Reluctant Dragon!) as well as performing my own material and building KCPuppetree. In the last three years, KCPuppetree has grown to feature 4 shows, toured throughout Oregon and Washington, offers local birthday party and library performances, performed at street fairs, farmers markets, and festivals, and even formed a puppet rock band!

How did you get started making puppets and why recycled materials?

I have always loved making art. I was originally more of a painter and drawer, but while working with Tears of Joy Theatre and KCPuppetree, I began to think in 3D! The first production I wrote and designed for Tears of Joy Theatre, Papagayo, involved puppets that were entirely covered with pieces of Tyvek (plasticized paper) like a collage.

This was the first time I had crafted an entire show by myself. I had previously thought puppets had to be finely crafted objects, sewn and made of felt, or carved out of wood or foam. Suddenly my mind was expanded that puppets could be made out of anything!

After, I worked on a grant (previously mentioned) that focused on re-use education, and we made an entire puppet show out of recycled materials. This was not only the start of my company, KCPuppetree, but it was also when the door really flew wide open for me artistically. I recognized that not only was the use of recycled materials, obviously, free, but the audience connected to the puppets in a different way. Audiences enjoyed recognizing the common materials they saw in the show.

I have heard endless feedback that children have gone home, dug through their recycling, and made a puppet of their own. I make it a point to add an exploration of the materials I used at the end of every show for this very reason. I also try hard to show how recycled materials can actually look good. My puppets don’t look like trash. My goal is to show how these common objects, which we’re so used to throwing away, have endless potential.

What was the first puppet you ever made? And which is your favorite puppet?

He’s not my first, but my most beloved puppet is Hank. Hank Bagman, and yes, he’s made out of bags. Most “hardcore” puppeteers I meet seem to have one character who is almost a part of them. Hank is mine.

I originally made Hank for a completely different show where he was a grumpy tree creature named Ert. At that time he was only a head that would pop out of the tree; he had a different voice, always grumpy, almost Oscar the Grouch like. Then I gave him a body, changed his expression a little bit, and he was no longer Ert, no longer grumpy.

With two other puppeteer friends, we started dreaming of creating a Puppet Rock Band called Trashman and the Noise Band. Hank became the drummer, and over time, his character transformed. He’s a little dumb, very sensitive, and very sweet. He enjoys hugs and has a huge laugh. I’ve enjoyed his character so much that I’ve even written other plays for him, including Gift of a Trashi, a twist on the classic short story “The Gift of the Magi“ by O. Henry, in which he and his best friend, Egger (made entirely out of egg crates), learn about sharing and selflessness.

At home I don’t even put Hank in a box, instead he sits next to my couch. If I said I didn’t chat with him every once in a while, I’d be lying.

What’s your process for writing a puppet play? Which comes first, characters or story?

I typically think of a theme or a story first. I’m an avid reader and collect stories from around the world which inspire me. Usually, as I’m coming up with the general outline of the story, the characters become clear.

I go through several rounds of bullet points, breaking down scenes, action, etc. At this point, I start to get a mental image of the characters. I typically don’t draw or design the look of the puppet before I create them. Since I use all found objects to build my puppets, I let the objects dictate the look of the character. I have a general idea how I want them to look, but it’s exciting to see the characters slowly reveal themselves.

What advice would you give an aspiring puppeteer or storyteller?

Follow your dreams. I joke all the time that “Who would have thought I would actually use my theatre degree?” But why not? There are so many jobs out there, different types of people, and endless dreams. There are jobs in the arts, but you have to work hard to make art a full-time career. Continue following your passion your entire life. Maybe it turns into a job, maybe it’s just a hobby. Either way, don’t quit. Take classes, meet other artists, connect online, do research, and play around at home. Have fun!

Who or what inspires you?

My mom was a teacher for 30 years. I watched her work hard, stay up late correcting papers, and love every minute of it. That passion to do what you love no matter how hard it is has stuck with me.

I am also fortunate to have had some amazing teachers who have inspired me along the way. From my fourth grade teacher, Mr Labato, who read stories with a dozen silly voices, to my high school English teacher who had a career in acting before she started to teach, and college professor Stephanie Hunt who encouraged every one of us to follow our dreams.

I have also connected with many amazing and inspiring artists both locally and internationally. Thanks to the internet, I enjoy following them online, viewing their art and style, and opening my mind to the endless possibilities of puppetry.

Of course, I would be remiss if I did not mention Jim Henson, Frank Oz, and Julie Taymor. I grew up watching the Muppet Show and Sesame Street. That’s where I first fell in love with puppetry. Labyrinth is one of my all time, favorite movies. As a kid, I was fortunate to attend a Broadway performance of Lion King, and it blew my mind! That was the first time I had seen up close puppets, large body puppets, and the infusion of puppets with live actors on stage.

I love to read. My bookshelf is full of classic novels, juvenile fiction, and world folk tales. Growing up, and still to this day, Roald Dahl is my favorite author. I have reread Matilda a dozen times. I dreamed of using my creative energy to make magical things happen just like Matilda. Ursula K. LeGuin, a Portland native, is also a favorite author, and I was fortunate enough to work with her when Tears of Joy Theatre created a puppet show of her book: A Ride on the Red Mare’s Back. I also have a large collection of children’s books, specifically folk tales with beautiful artwork. I especially love the artwork of Shonto Begay (The Mud Pony and The Magic of Spider Woman) and Gerald McDermott (Papagayo and Anansi the Spider: A Tale from Ashanti). 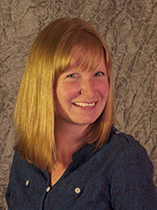