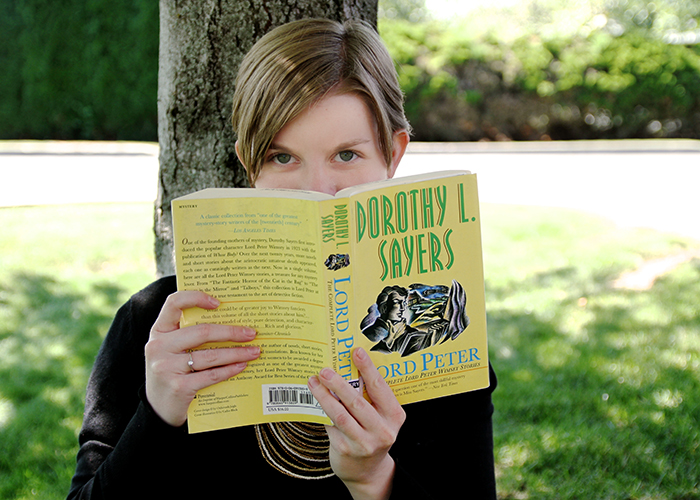 I’ve spent a sizable amount of my life in the fictional pages of my favorite books. Sometimes, with all of this reading, I wonder if I’ll ever have time to meet anyone I might like to go to dinner with. I’ve managed to climb out of the pages every once in a while, at least long enough for a dinner date or two, but no matter how many “real dates” I have, I still find myself going back to the loves of my youth (and relative youth), who rise to meet me, right off the pages. If I ever find someone I’d rather date than one of these lovely characters, perhaps we might venture on a second date. Maybe we can read together.

Until then, I’ll introduce you to some of my fictional crushes. (And I’d love to hear some of yours).

Lord Peter Wimsey. The Lord Peter Wimsey mysteries. Peter is a fascinating paradox. He is silly and self-forgetful, with friends of all stripes and a killer wine and book collection, but he also has one of the most intricate minds of any detective I’ve read, and it never stops trying to figure out whodunit. Of course, it doesn’t hurt that he’s a fantastic dancer, or can quote passages of poetry, either.

John Watson. Sherlock Holmes. I’ll freely admit that this one is fueled by the recent reboot of Sir Arthur Conan Doyle’s characters in Sherlock. I love John’s sweet, patient spirit and the honor and kindness with which he supports those he loves. He is loyal to a fault (sometimes to his own detriment, which I understand), and I’ll just bet he has a lot of great stories to tell.

Calvin (from Calvin and Hobbes). This may seem like an odd choice to some of you, but to understand my reasons, you’ll need to know that Calvin and I grew up together. I remember sitting at the kitchen table on Sundays (before the strip came to a close) laughing aloud at Calvin and his crazy antics. Though I’m sure Calvin would have been a terror to raise, I’d like to think that the creativity and ingenuity which made him such a diabolical child also made him a multi-faceted, versatile adult. Plus, I value the ability to be funny in a date.

W. W. Hale the 5th. The Heist Society Series. I realize that I am not the target audience for Ally Carter’s series about teenage thieves; perhaps I am simply young at heart. Whatever the reason, I find myself captivated by these engaging characters and eager to see what adventure they will go on next. Hale, first name unknown, is a (young) man of mystery. He’s fiercely loyal to those he loves, innovative in tight spots and a great conversationalist. I love his way with words and the unexpectedly thoughtful way that he engages with people.

Mr. Knightley. Emma. It would be impossible for me to complete this list without mentioning one of Jane Austen’s classic characters. I go back and forth on this every once in a while, but so far I have always returned to Mr. Knightley. There is something lovely about the way he is committed to Emma’s growth. The movie versions have rendered him as warm and sweet, and he seems to have a generally kind demeanor.

George Weasley. The Harry Potter Series. With so many characters to choose from in the Harry Potter books, it was tough to make a decision. After all, I’ve spent a lot of time within these books and I’ve grown to care about many of the characters. In the end, though, I love George’s carefree spirit (likely a little more somber now that he is bereaved of his twin) and the way he takes Harry under his wing. I love the mischief of the brothers as they traipse around Hogwarts in possession of the Marauder’s Map and the entrepreneurial spirit that leads them to open a shop in Diagon Alley. I can imagine that I’d never be bored in George’s company. Also, if I’m honest, I think that part of me loves the idea of dating my way into the Weasley family. There is something so warm and welcoming about them, even in the face of tragedy and struggle, I know that I’d enjoy being part of that.