May the Force Be With You: 7 Star Wars Books for Kids

I confess that I don’t know a lot about Star Wars. Growing up my exposure to the “Force” was limited to a few viewings of Star Wars: Episode VI – Return of the Jedi at a family friend’s house. Jabba the Hut always creeped me out but I loved Princess Leia’s strong character and awesome costumes. Despite the fact that Star Wars: Episode IV – A New Hope and Star Wars: Episode VI – The Empire Strikes Back were the first and second movies in the original series, for some reason, we never got around to watching them.

Recently, Star Wars has taken on a new significance in my life thanks to my boyfriend. He’s a big fan and has graciously started educating me on all things Star Wars. A few weeks ago, we were perusing a local bookstore together and stumbled upon Jeffrey Brown’s adorable collection of Star Wars books for kids. One title in particular, Darth Vader & Son, stood out to me not only because of the Star Wars reference but also because my boyfriend has two-year-old twin boys. Even at the age of two, the boys are already following in their daddy’s footsteps towards Star Wars fandom.

From Obi-Wan Kenobi to Luke Skywalker, I’m finding that Star Wars is full of heroes with incredible stories that possess the ability to capture the imagination of all ages. This summer at the library we’re all about heroes and discovering your own story. If you have any budding Star Wars fans at home, you’ll definitely want to add some of these books to their summer reading list. 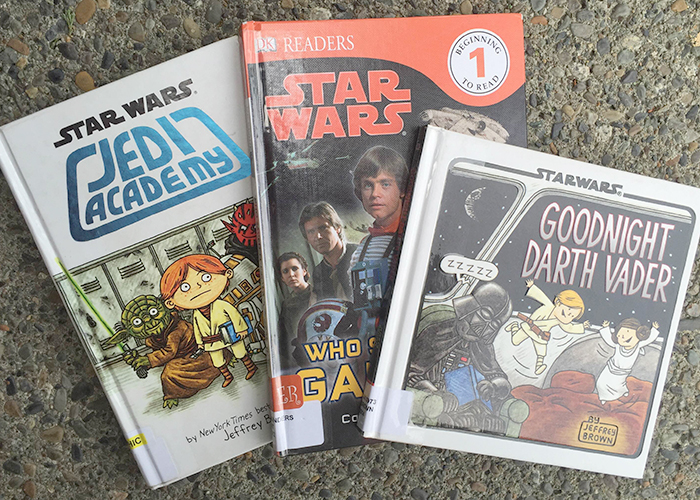 Go from A is for Anakin to Z is for Zam Wessell! Take your youngsters on an alphabetical adventure as they learn about the characters, droids, spaceships, and creatures in the Star Wars intergalactic world. This fun board book will give them their first glimpse into the galaxy far, far away while also helping them to learn the letters of the alphabet.

Both entertaining and educational, Star Wars: 1, 2, 3 is the perfect companion to Star Wars ABC. Your toddler will learn how to count and identify Star Wars characters all at the same time. For Star Wars-loving parents, what could be more perfect? It’s much more fun to count Ewoks or Stormtroopers than ducks or rabbits.

A bedtime story told by Darth Vader? It’s not as odd as it sounds. In Jeffrey Brown’s parody of the children’s classic, Goodnight Moon, the Sith Lord must quiet his rambunctious twins, Luke and Leia, who insist on a story before going to bed. Designed like a comic strip or graphic novel, both you and your kids will love the detailed illustrations and witty dialogue. This story will send your little ones off to dreamland with visions of Yoda, Han Solo, and Chewbacca dancing in their heads. 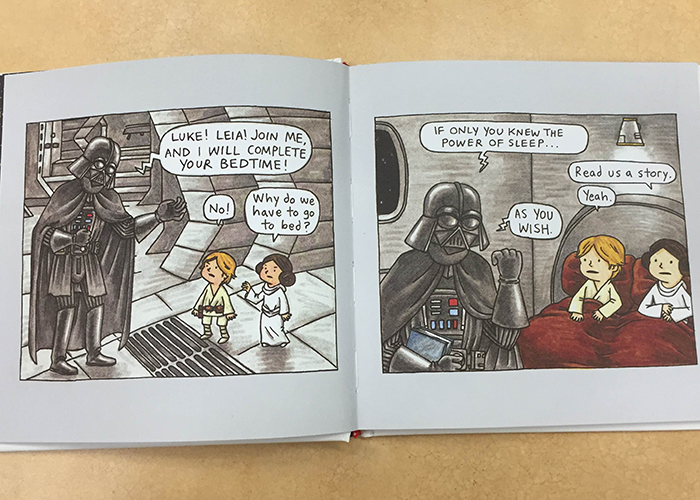 Darth Vader and Friends, also known as “Episode: BFF”, is the latest installment in Jeffrey Brown’s Star Wars collection for kids. From C-3PO and R2-D2 to Han and Chewie, this book illustrates the special friendships between the members of the Star Wars universe. It’s a great chance to teach your kiddos about the value of friendship and the unique traits of popular Star Wars characters. Even as an adult, I loved reading this cute story and plan on adding it to my personal library.

Star Wars: Who Saved the Galaxy?

Part of the DK READERS series (Level 1: Beginning to Read), this book introduces the key members of the Star Wars galaxy while describing the role each of them play in battling evil Emperor Palpatine. A glossary in the back allows your beginning reader to look up the meaning of words used in the story, which can be particularly helpful with reading comprehension. Although this book isn’t designed for adults like me, as a Star Wars novice, I found it extremely helpful in identifying who the good guys and bad guys are in the galaxy.

If your kids are old enough to watch and enjoy the Star Wars movies, then they’ll devour this book (you probably will too). Jason Fry explores 100 iconic and dramatic scenes from all six Episodes with vivid images and interesting factoids. Experience everything from Luke Skywalker’s epic battle with the dark side to Anakin Skywalker’s transformation into Darth Vader.

If your kids loved Goodnight Vader and Darth Vader and Friends, this first book in Brown’s graphic novel series for ages 8-12 is sure to be a hit. Jedi Academy takes place at a middle school in a galaxy far, far away. Roan’s only wish is to follow his family’s tradition and attend Pilot Academy. However, things take an unexpected turn when he is denied acceptance to pilot school and instead accepts an invitation to attend Jedi Academy. Find out if Roan will survive his first year under the tutelage of Master Yoda and what hilarious obstacles he’ll encounter along the way. Other books in the series include: Return of the Padawan and The Phantom Bully (Release Date: 6/30/15).

I may never become a Star Wars expert; however, slowly but surely I’m beginning to find my way in the galaxy. Lucky for me, I’ve got a patient teacher and lots of books at the library to supplement my Star Wars education. May the force be with you!

Looking for more Star Wars fun this summer? Come to our Star Wars Celebration on Monday, August 10 from 6–9pm at the North Spokane Library. We’ll have games, food, trivia, and a costume contest with prizes. Members of the 501st Legion’s Garrison Titan, Washington’s premier Star Wars costuming organization, will be joining in the fun and available for pictures.