Storyteller Indiana Bones at the library 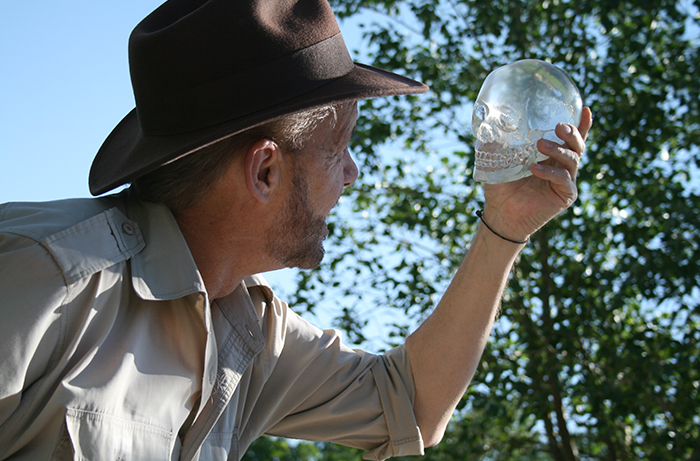 Storyteller Indiana Bones, along with his faithful companion Draco, is weaving tales of myth and wonder, live at the Spokane County Library District this summer. You won’t want to miss “Amazing Physical Feats from History,” starting Monday, July 18, as part of our 2016 Summer Programs.

We were curious about the life of a storyteller, so we asked Indiana Bones some questions. He graciously answered and fed our curiosity. 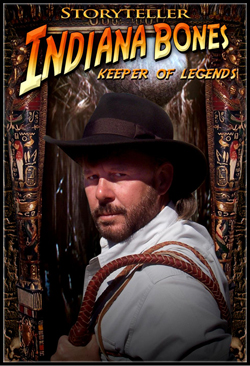 How did you become a storyteller?

There is a unique story behind how I became a storyteller. It started with a dream—three dreams to be exact.

One night in Baltimore, I was sound asleep when I thought I was awakened by a presence in the room. Startled, I sat up to find my grandfather (who had been dead for almost 30 years) leaning on my window sill. I said, “Hey, Grandpa. How are you?” He responded, “Pay attention to your dreams.” Then I truly woke and of course no one was there.

The second night I had a second dream. I had apparently just finished giving a presentation in a college lecture hall to a room full of Native American Chieftains. They all filed out in total silence, but as they passed each one nodded their approval to what I had just done.

Third night, a third dream. I was wandering through the desert when I saw sitting under a craggy rock an even craggier medicine man. He called me by one name: “Seanchaí.” I had no idea what the word meant. A few days later someone loaned me a book on Irish history because I am Irish and they thought I would enjoy it. I began to read, and there on the first page were the words, “the Seanchaí, the storyteller came to town.” The next day, I opened the want ads and there was a posting: “Wanted: Storyteller for Haunted Hay Rides.” And so it began.

What was the first story you ever told a live audience?

Although I wrote and performed the ghost stories for the haunted hayride, I like to consider my first real story as my telling of “The Devil’s Tower,” my first original creation using the Indiana Bones style and approach.

What is the Indiana Bones approach?

I create and tell stories based on ancient myths and legends from around the world and throughout time with a smattering of actual history to give them historical perspective on how or why these stories may have come about. And as my telling evolved, I started using artifacts and fossils to transport the audience back in time as we “dig up the old stories” together.

Who and what inspires you as a storyteller?

My grandfather first and foremost inspires me. Aside from appearing to me like Marley’s ghost, when I was young, about the age of 3, he started to expose me to the great authors—Shelley, Yeats, Scott, and Longfellow, just to name a few. Mark Twain is also another great storyteller who inspired me early on.

What inspires me is not only the great adventures that my research and travels take me on, but also that storytelling can be a great educational tool. It builds appreciation of stories and can encourage reading. So I say, “Open a book. Open your mind. Open your imagination.”

A sense of adventure, the potential for humor, and a story that people may think they know but may not know the reality behind the story all make for good stories to share. If there is a formula for a good story for telling and performing, it would be the different version of the myths or legends that are found in many ancient cultures. So I research as many as I can dig up and combine as needed, making my own unique version.

What advice would you give an aspiring storyteller?

Read! Read as much as you can and then look for the story in everything. If you see an interesting picture in a magazine or in a museum, then make up a story that goes with it. Open your imagination!

What book changed your life or how you view the world?

Wow so many, to limit to one is tough. But I have to give the nod to Don Quixote by Cervantes. 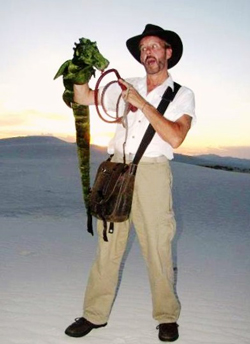 Storyteller Indiana Bones (a.k.a. Mike McCartney) is an Emmy Award winning writer, producer, and performing artist. He is a former PBS documentary producer/writer, TV personality, professional actor, and faculty member of Mississippi State University. Now, Indy is a full time professional storyteller. He believes that storytelling can be used as an effective teaching tool. Learn more at www.storyteller.net/tellers/mmccartney.