Some people cook every recipe in Julia Child’s Mastering the Art of French Cooking and then blog about it. Others write whole books about reading the entire Encyclopaedia Britannica in their quest to “become the smartest person in the world.” Me, I just wanted to lay around in a hammock. So I set forth my “experiment”—to spend twelve hours in a hammock with nothing more than Spokane County Library District resources to entertain me. I could foster my considerable laziness and also hit an upcoming deadline for this blog. My editor over in the Communication Department said “sounds great!” but my boyfriend, 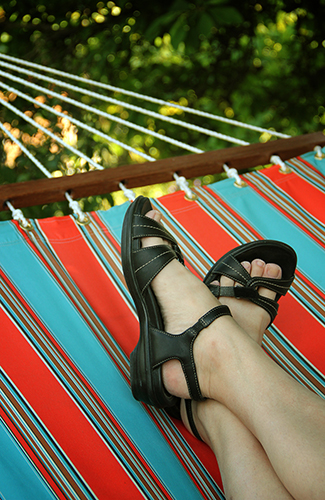 Brian, knows me better and immediately flagged the flaws in my plan.

“Twelve hours is a long time,” he said. “Maybe you should shoot for eight? Also, what are you going to eat?”

I hadn’t thought of this. Luckily, Brian is the smartest (and most patient) person I know and offered to bring me a variety of foods from cookbooks in the SCLD collection. Sold! As Brian made his grocery list, I settled on my ground rules:

And so the experiment begins…

8:30: Reporting for duty. The hammock, a brightly striped number from World Market, is really wobbly at first, but I figure out how to make micro-adjustments as I get settled. I’m already too hot. This is insane. I almost flip myself out of the hammock reaching for my coffee.

9:00: Ugh, it’s so hot and it’s only 9am. I survey the stack of books I brought outside and decide to start with local writer Shawn Vestal’s short story collection, Godforsaken Idaho. Not only do my writer friends speak highly of this book, I also know it’s been nominated for a 2014 PEN/Robert W. Bingham award. But before I’m even two pages in, I feel a gross rivulet of sweat slither down my back. I try to focus, calling forth an inner voice that’s part Jeff Lebowski, part group therapy leader. Read the words, man, don’t think about the heat.

9:07: I use one of my bathroom breaks to grab a fan and extension cord from the house. I have a brief moment of wondering if this hammock idea was pure idiocy. I have neither the attention span nor the physical fortitude for eight hours of anything. Also, I realize with a sinking sense of dismay, I have been neglecting the hell out of our garden. Everywhere I look there are spiky, spindly, sprawling weeds. I think about running to the garage for the hedge clippers and gardening gloves and then remember I have to stay in the hammock. I’m only partly relieved—those weeds are only going to get stronger. 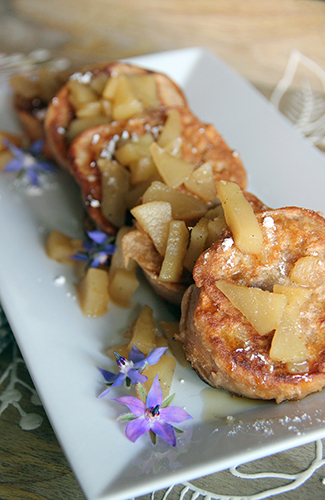 10:00: Breakfast arrives! Brian carries a tray loaded with French Toast (topped with Cardamom Pear Compote) and two generous Bloody Marys (from the library’s copy of Pure Vegan, by Joseph Shuldiner). The French toast is all golden and brown and smells as amazing as it is pretty, garnished with little blue stars of borage flower from our garden. The Bloody Mary is one of the best I’ve ever had—it’s spicy, with freshly-grated horseradish and tabasco, but it’s smooth and perfectly blended. I decide I could drink three but settle for the one.

11:12: Woooooo! This hammock idea is awesome. As the sun finally drifts into the path of our gigantic magnolia tree, I’m bathed in dappled warmth and the Bloody Mary is fully working its magic. I put the book down, content to just space out.

12:00: Something wonderful has taken place. Somewhere above me in the tree a chickadee is rustling and gently chirping to itself. I’m drifting into a cozy half-sleep and don’t care anymore about the weeds, or all the stuff I should be reading, watching or listening to for the purposes of this post. I’m just happy to float, gently rocking in my garish sling.

1:30: I’m feeling a little peckish just as I notice tasty smells emanating from the house. Brian arrives with a plate of Bahn Mi sandwiches (from Isa Chandra Moskowitz’s excellent Isa Does It). As with breakfast, the presentation is spot-on, and Brian steadies the hammock so I can use both hands to ferry the giant french bread/shiitake/radish/spicy sauce concoction to my maw. It’s fantastic—the shiitake giving a meaty earthiness to the delicately marinated cucumbers, mint leaves, and radishes. We wash it down with some New Belgium Snapshot Wheat beer and although I try to talk Brian into hanging out longer, he reminds me that I am supposed to amuse myself with SCLD resources, not human contact. Also, he’s investigating the latest version of Dwarf Fortress (a game I am starting to understand is very, very complicated) and I know he’s eager to get back inside. 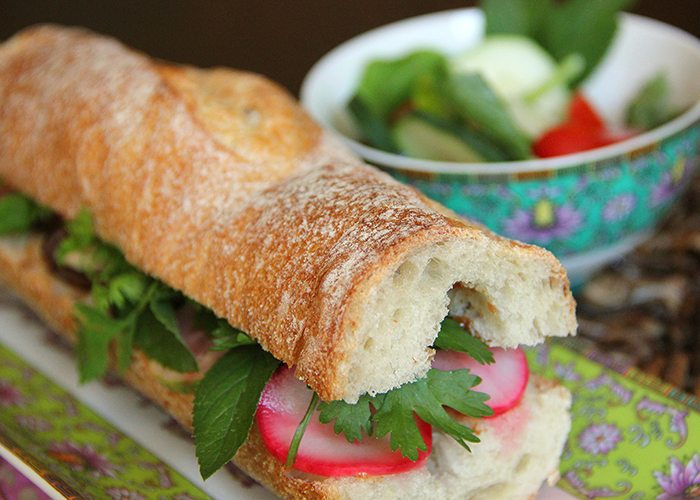 1:45: I switch gears and start reading The Gifts of Imperfection by Brene Brown. And this is the great thing about ebooks — they are generally invisible to curious eyes. So if I want to read something self-helpy and/or pop psychology-ish, as I am sometimes wont to do, I can do so in privacy. I read this once before, right when I moved back to Spokane, but have lately been feeling like I need to read it again. The author is a scholar and social researcher and I trust her work. She’s also funny. But mostly I’ve been all-too-aware of my glaring flaws recently and need to read something both comforting and challenging. I know this will deliver.

2:30: It’s too hot to be reading about my issues and being in the hammock is starting to make me stir crazy. I want to get up and do something, anything. I decide to try to watch some streaming movies through hoopla on my iPad. It remembers my library card number so all I have to do is pick something. First up is Our Idiot Brother, with Paul Rudd, Elizabeth Banks, Zooey Deschanel, and Rashida Jones. Good cast, amusing premise, and hey, I have an idiot brother myself. This should do quite nicely.

2:40: I’m already bored. I don’t think it’s the movie. I think it’s the fact that it reminds me of a Nicole Holofcener film and I’m not in the right frame of mind to laugh and feel uncomfortable at the same time. Maybe escapism? Maybe really bad movies I loved when I was too young and dumb to know any better? Ah, yes, Xanadu. I know you won’t steer me wrong with your roller-skating Olivia Newton-John and your misplaced Gene Kelly and your bonkers soundtrack by the Electric Light Orchestra. Let’s do this.

2:50: I can’t do this. In another situation, like at night, with beers and Brian, this would be hilarious. But alone and sweaty on the hammock, I can’t take Michael Beck’s sad sack mopey artist (who seems to have gone to the Mark Hamill school of portraying petulance). The art deco sets are fun, and the scene where the muses in the mural become “real” is like an extended shampoo commercial, but all in all it’s not the laff-fest I’d envisioned. And the music is terrible. 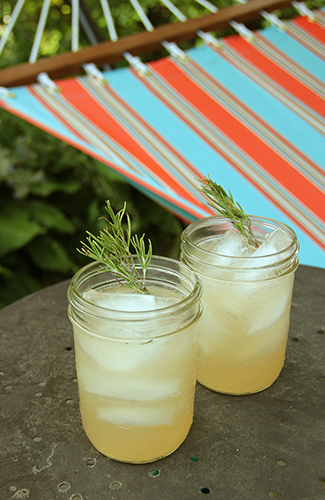 3:30: I’m back to reading Godforsaken Idaho. The writing is good, the kind of good that makes me realize I don’t know what I’m doing and can’t really write after all. But the short stories—of drifters and thieves and guys who drink too much and consider very little—give me the twitchy feeling of being three hours into a family reunion where someone else drove and I can’t leave.

4:10: My eyes are all gritty from trying to read in the sunlight. I close them and listen to the fabulous I Love You But I Must Drive Off This Cliff Now by Got a Girl. The album title and its retro cover on hoopla are what initially grabbed my attention but as I’m listening to the 1960s French pop-inspired compositions I realize it’s also in the same vein of catchy, cinematic music that She & Him, Belle and Sebastian, and Camera Obscura do so well.

4:30: I try to come inside but Brian informs me I haven’t really been in the hammock for a full eight hours. Also, he forgot to make the Sparkling Rosemary and Grapefruit Water he’d planned. He ushers me back outside and tells me to wait there.

5:00: The rosemary and grapefruit water is perfect. It’s neither too sweet, too strong, or too watery. It’s also a lovely, pale pink color, much lovelier than the sunburn starting to develop on my nose.

5:30: I’m done!! My butt actually hurts from too much hammock. The kitchen is spilling over with dirty dishes, but I don’t mind and in fact, wave Brian off as he starts to help clean up. All in all, my day in the hammock had its moments but I was surprised how uncomfortable and aimless I felt. I really think that I couldn’t have done it without my pre-assembled distractions (thanks, library card!). The sun streams into the kitchen as I start piling up plates and glasses, and I realize that being inside doing something productive is actually the happiest I’ve been all day.