Talking to myself: an alternative writing method 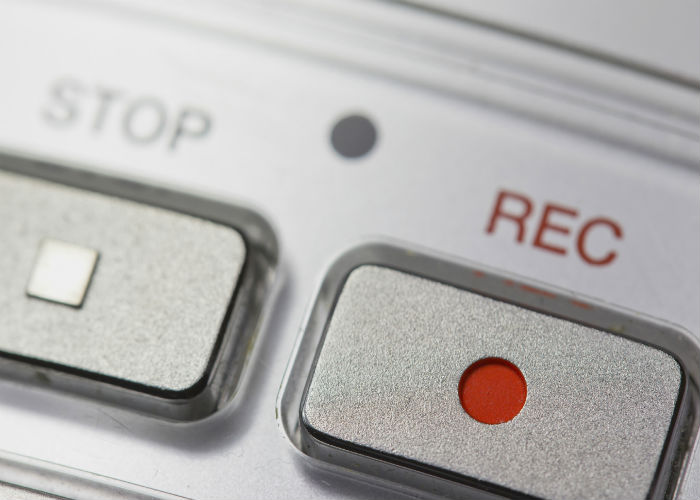 If you see a person walking along engaged in a vigorous conversation with no one else around them, it doesn’t necessarily mean he’s escaped from the nearest asylum. It could be me talking to myself. But don’t be concerned, don’t interrupt me, don’t bother me at all—I’m writing.

It’s been more than twenty years since I gave up the keyboard and took up a recorder for my first drafts. Since that time, I’ve dictated over a hundred novels on an innumerable number of microcassettes—and now digital files—speaking the words aloud, rather than typing them into my computer.

While this might not seem to be a writer’s traditional technique, remember that the storyteller’s art has always been a spoken one. Revered shamans would tell tales around the campfire, legends of monsters in the darkness or heroes who killed the biggest mammoth. Homer did not write his epics down. What could be more natural than speaking your novel aloud before committing the words to a computer hard drive or an editor’s red pencil?

Okay, so you’re perfectly satisfied with sitting at your cramped card table after shoving aside the checkbook and the bills to clear a spot for writing. If you can truly work that way, then I salute you. For me, as I write this article, I am hiking in a canyon above the Colorado River, making my way up to a pristine lake and a spectacular waterfall—I wouldn’t trade places in a thousand years.

One of the primary advantages of writing with a digital recorder is that you can be outside in a spectacular area, bombarded with inspiration. There, the details of nature or history itself can provide story fodder.

Under a tight deadline for one of my Star Wars novels, I went to Sequoia National Park, where I planned to isolate myself and get a lot of writing done. After I had settled into my cabin, a mountain snowstorm hit and made the roads impassable. The next day, I trudged out into the new-fallen snow, breaking trail among the pine trees and winding along cross-country ski paths to see frozen waterfalls and beautiful ice shelves on granite outcroppings.

While I walked, smelling the frosty air, seeing my breath in front of me, and listening to the wind in the Sierra Nevada mountains, I wrote about Han Solo on the polar icecaps of an alien world. Since I am not able to visit arctic zones on other planets, this was the perfect place to draw inspiration.

Other times I have hiked through the arid canyons of Death Valley, along dried ocean beds, and over powdery sand dunes. Feeling the heat and the dry crackling air, I have written many chapters in my best-selling Dune novels with Brian Herbert. What better place could a writer be when telling the story of a waterless planet that would make the Sahara seem like an oasis?

I spent a week in Capital Reef National Park in the slickrock canyons of southern Utah, where I wrote a significant portion of my Saga of Seven Suns novels (one of which, The Dark Between the Stars, is nominated for this year’s Hugo Award for Best Novel). During my hikes, I dictated the adventures of characters exploring ancient, abandoned cities within rock overhangs, very similar to the Anasazi ruins I visited.

Even if you aren’t in a place precisely comparable to your subject matter, you can still experience sounds and smells and sensations that add vivid details to your prose—details you may not remember while sitting numbed in your cluttered office at home.

Another advantage of dictating while out walking is the solitude and the peace-of-mind you’ll encounter. While hiking, you can let your mind sink into the universe of your story, blessedly without interruptions. Out on the trail with your digital recorder, you can avoid telephone calls, the temptation to log on and read your email, do the dishes, scrub the toilets, clean the attic etc.

Let’s face it, writing is a sedentary profession. Full-time authors spend their days seated firmly in the chair, fingers on the keyboard, without a great deal of invigorating exercise. Personally, I hate being cooped up in the office and would rather be hiking, or even just walking along bike paths in an urban area. Once I learned how to dictate, I no longer had to choose between a day of hiking or a day of writing. I can do both at the same time. It keeps me fit and active, and it prevents me from becoming one of those “pear-shaped people.”

On the more serious side, some writers are medically forced to abandon the keyboard and must choose between giving up writing altogether or finding a different method. My wife, best-selling author Rebecca Moesta, suffered from severe carpal tunnel syndrome in both wrists and cubital tunnel nerve entrapment in both elbows, which in the end cost her four surgeries and a draconian reduction of her keyboard time.

Rebecca had always considered my technique of dictating to be somewhat eccentric, but found herself forced to get a headset and digital recorder of her own (though she chooses to spend her dictating time on a treadmill or in a shopping mall, rather than out on a forest trail).

When I’m out dictating, I manage to produce far more pages in less time than if I’m chained to my desk. I’ve even learned how to fool myself into writing more than I originally intended to do. In a trick I call the “round-trip deception,” I will keep hiking outbound until I have completed one entire chapter . . . at which point I should have just enough time on the way back to dictate another full chapter. Since I have to walk back anyway, I might as well be writing.

Last fall I spent a week in southern Utah, I hiked a total of fifty miles and wrote 168 pages in my new novel—that’s about three-and-a-half pages per mile! It would have been impossible for me to do this much at home with numerous distractions.

The most obvious drawback with dictation is that once you’ve recorded a chapter, then it must be transcribed. You can transcribe your own files, of course — but to me this defeats the purpose of using a recorder. In the time it takes to transcribe a chapter, I could just as well have written a completely new one.

Typists offer their services in the classified ads of many writers’ magazines; transcribers or stenographers are also listed in your local yellow pages. The going rate seems to be around two to three dollars per page.

You may need to try several different typists before you find one who works well with your material. I burned out one typist with a single Dune tape; she simply couldn’t handle the strange science fiction setting and vocabulary! My regular typist has learned my quirks and knows when to change dialog, when to break paragraphs, what punctuation to use. She has even offered insightful comments on novels-in-progress. Often I feel like Charles Dickens writing a weekly serial, handing in one chapter at a time so the typist can see what happens next. I upload the files, email them to her, she transcribes them, and emails me back the Word files.

Right now, as I type this, I have three separate typists loaded to capacity: my main typist still has 70 chapters to go (out of 130) in Eternity’s Mind (the last, 800-page novel in the Saga of Shadows), my second typist has a new 6,000-word Dan Shamble, Zombie PI story, and my third typist has a new 30,000-word novella based on the forthcoming Heroes Reborn TV series. While I’m waiting to get the files back, I’m editing the fourth draft of Navigators of Dune on my main computer.

Always keep in mind that, like any other writing technique, dictation is a skill that must be learned. Give it time and practice. I started out carrying a recorder to dictate occasional notes because I liked to walk while mulling over storylines and developing characters. This habit evolved into speaking outlines, laying out scenes, and then detailed rough drafts. Now it’s graduated to near-finished prose.

Some people try the recorder once and give up, claiming that it feels too “unnatural.” By comparison, writers are accustomed to thinking up sentences, breaking them down into words, spelling those words, then moving their fingers across a scrambled keyboard to put down the prose one letter at a time. Remember, the QWERTY keyboard was intentionally designed to slow down typists. Just talking out loud doesn’t seem any less natural to me!

First, you’ll need a recorder, available at any office supply store. A typical hand-held recorder should cost fifty dollars or less (probably one of the least expensive pieces of equipment in your office).

You may become self-conscious when people look at you talking surreptitiously into your digital recorder—but, in the words of the genius Richard Feynman, “What do you care what people think?” I’m walking along involved in a story, writing what just might become a best-selling novel. They probably assume you’re talking on a Bluetooth set.

So keep an open mind if you are willing to try a new writing technique. Go out and talk to yourself. 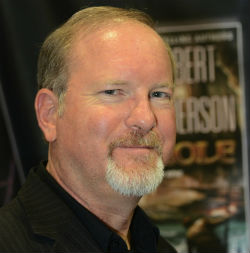 Kevin J. Anderson is the author of nearly 100 novels, 48 of which have appeared on national or international bestseller lists; he has over 20 million books in print in thirty languages. He has won or been nominated for the Nebula Award, Bram Stoker Award, the SFX Reader’s Choice Award, and New York Times Notable Book.

Anderson is coming to Spokane for Worldcon 2015! He will make a special appearance at the North Spokane Library on August 20 to present his talk, Building My First Lightsaber: From Small Town Fanboy to International Best-Selling Author. After his talk, he will be selling and signing books for the public.

Don’t miss this opportunity to meet a fascinating, best-selling author!