5 Thanksgiving picture books that shed new light on the holiday 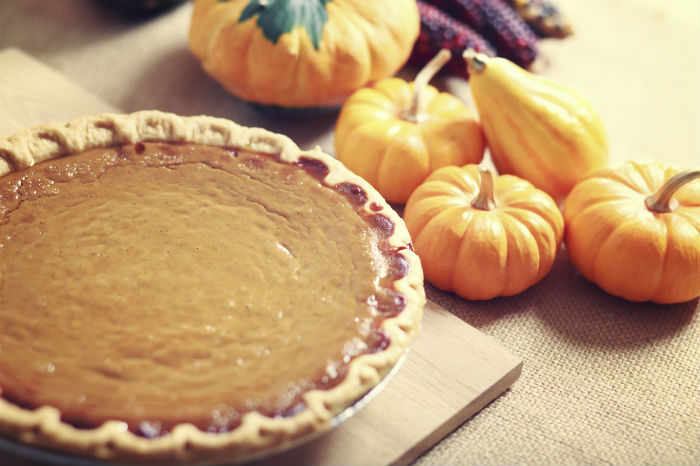 Thanksgiving wasn’t my favorite holiday as a child. For one, no presents. But also, it meant being on my best behavior all day, staying out of the kitchen, and having to eat things I didn’t have to eat the rest of the year (green bean casserole, my grandmother’s terrifying creamed corn dish with smoked oysters). As an adult I’m kind of a Thanksgiving maniac—I like to greet everyone with black olives on my fingers and enthusiastic exclamations of “Gobble! Gobble!” There might also be a tradition of enjoying cocktails all day long, starting at around noon. 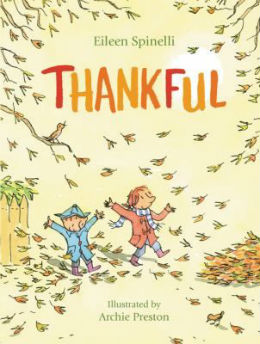 As an adult I can also appreciate several adult truths about Thanksgiving. Its actual history isn’t at all like what I learned as a child; plus, Thanksgiving is a uniquely American holiday that continues to evolve while still retaining its central message of gratitude and togetherness. With this in mind, I’d like to share a handful of kids picture books that reflect new ways of looking at this most traditional of holidays.

Thankful by Eileen Spinelli is a great introduction to the whole concept of gratitude as the rhyming narrative muses who might be thankful for what: “the waitress is thankful for comfortable shoes; the local reporter, for interesting news…” The spare, squiggly-lined illustrations depict the members of a family being grateful for things throughout the day, with the children occasionally showing through games of make-believe what they imagine others would be grateful for. Warm colors and a minimalist text make this a great choice for families with toddlers and preschoolers. 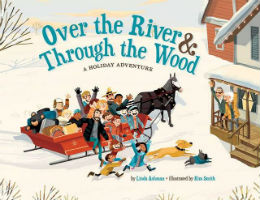 While there are already a few picture book renditions of “Over the River and Through the Wood” in our collection, none are as fun as Over the River & Through the Wood by Linda Ashman. As the story opens four different families are seen opening an invite that says “Come to our house for the holidays and bring your favorite pie! Love, Grandma & Grandpa.” There’s a family with three kids and two dogs, a family with two dads, several families composed of different skin colors, and a family where the sisters look like each other but nothing like their parents.

Each family is shown, The Great Race-style, dashing to airports, subways, family cars, and even coastal ferries, all while enduring a variety of travel snafus. Thanks to the magic of an old-timey sleigh, everyone (except a few of the pies) makes it to Grandma’s house. While the text is nothing like the traditional “Over the River and Through the Wood” song, it has a bouncy, musical cadence perfect for reading aloud. It also doesn’t specify which winter holiday is being celebrated, making it adaptable to not only Thanksgiving but also Christmas. 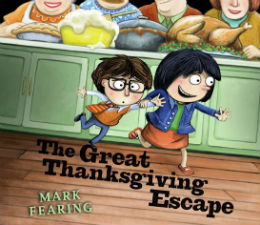 The Great Thanksgiving Escape by Mark Fearing came out last year but is still a great choice for those who take their holidays with a healthy dose of irreverence. Gavin is none too happy about Thanksgiving at Grandma’s house. There’s nothing to do and he’s ordered to play with the little kids (a motley assortment of drooling toddlers).

Rescue comes in the form of his cousin Rhonda, who has both wisdom (“sometimes you have to make your own fun”) and imagination. Suddenly they’re creeping past guard dogs (dachshunds in sweaters), zombies (texting teenagers), and the Wall of Butts (grownups watching football standing up) to their ultimate destination—the backyard swing set. This story is great fun for all ages, including those of us who graduated from the kids table long ago. 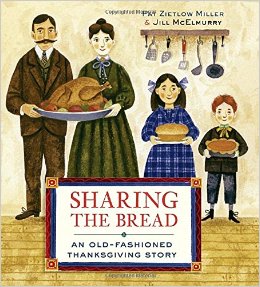 At the other end of the traditional spectrum is Sharing the Bread: An Old Fashioned Thanksgiving Story by Pat Zietlow Miller. Rendered in muted blues, yellows, grays, and browns in the folk art style popularized by Alice and Martin Provensen three decades ago.

Sharing the Bread shows a 19th century American family preparing their annual Thanksgiving feast, with everyone from Granddad to Baby helping in the preparations. A simple story of familial warmth and cooperation, this book suggests how Thanksgiving might have looked and been celebrated in the late 1800s. It’s a nice look at the role extended family and food preparation played in times gone by. 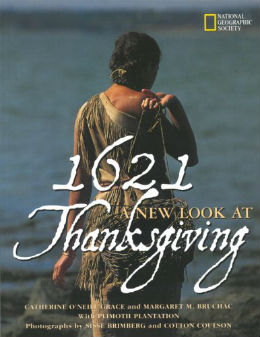 And speaking of tradition, some families might want to dig deeper into the myths and actual historical facts underlying the First Thanksgiving, but not know where to start. One of my favorite titles for this is 1621: A New Look at Thanksgiving by Catherine O’Neill Grace and Margaret Bruchac. It’s not a new title (2001), but it’s fantastic in terms of looking at the First Thanksgiving from both the Wampanoag Indian and European Pilgrim perspectives.

Photographed at the Plimoth Plantation site in Massachusetts, 1621: A New Look at Thanksgiving details daily life among the Wampanoag, as well as among the European settlers, and shows what the first harvest would really have been like. For more information on the First Thanksgiving from an American Indian perspective, there’s also a great, free study guide at the National Museum of the American Indian website.