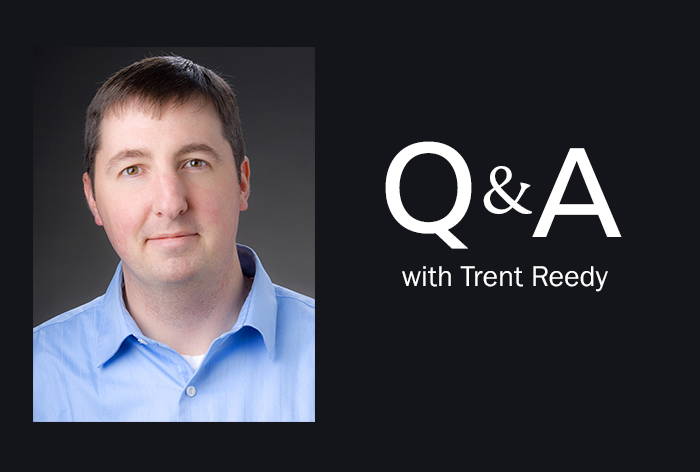 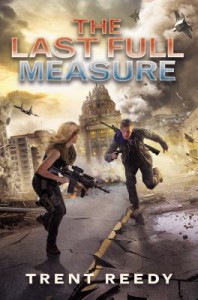 The United States are no longer united. In the wake of the Second Civil War, the once great nation is in shambles. And as the Republic of Idaho emerges alongside other newly formed, formerly American countries, the fate of the world hangs in the balance. Local author Trent Reedy concludes his stunning YA trilogy, Divided We Fall, with The Last Full Measure, which Kirkus Reviews describes as “an action-packed tale of a future readers will hope never happens.”

In the first book of the trilogy, Divided We Fall, Reedy introduces 17-year-old Danny Wright who enlists in the Idaho Army National Guard out of both familial expectation and a deep love for the American way of life. When his gun accidentally misfires at an anti-government rally, he sets off a conflict between the federal government and the Idaho militia that rapidly escalates into an all-out war. By the final book of the trilogy, Danny and his friends have seen the collapse of the nation and have had their loyalties tested by forces beyond their control. Reedy, who served in Afghanistan with the Army National Guard, draws upon his own experiences while also building a completely believable near-future scenario that raises important questions about the current state of American politics and individual responsibility.

Author of three stand-alone titles in addition to the Divided We Fall trilogy, Trent Reedy answers our questions about The Last Full Measure and the end of this trilogy, the current presidential race, and his love for the world’s great libraries.

Q: The Last Full Measure is the conclusion of the Divided We Fall trilogy. How hard was it to bring Danny’s story to a close? And did you have the end in mind with the first book or did that evolve over time?

I discovered, through the course of writing the Divided We Fall books, that crafting a trilogy takes quite a long time. I think the idea for this story first occurred to me back in 2011. I have been with Danny Wright and his friends for quite a few years now, and I’ve written them through a lot of tough times. So some of the goodbyes and losses near the end were a bit emotional for me.

The trilogy is a large story, the collapse of the United States and Daniel Wright’s challenges through that time. Because it is such a big story, I knew it would need more than one book to tell it. I was firm in my desire for a trilogy when I first pitched the idea to Scholastic, and back then I had a loose idea about how the whole story would go, but I did have to do some revisions to figure out how to stick the landing at the end of the third book. I’m very happy with how it all ends, and I hope readers are satisfied as well.

Q: I came across an interview from 2014 when Divided We Fall had just come out, and you describe speculating political and news events in order to move the story forward only to find them coming true. Did that happen with books two and three?

I’ve been shocked and disappointed at how often real events have echoed what happens in the Divided We Fall trilogy. In The Last Full Measure, the story has become more intense, deviating from what our world looks like now. So, fortunately, the events in The Last Full Measure haven’t predicted real life events to the extent found in the previous two books. However, as I was writing The Last Full Measure many months ago, there were two candidates, Donald Trump and Bernie Sanders who I think most people, at that time, never would have dreamed would still be such strong contenders this late in the race. But while The Last Full Measure takes place in the future and no real politicians are used, I did include a couple candidates whose names might remind readers of these two formerly long shot candidates. Readers will note the book makes no attempt to predict a winner.

Q: And in a similar vein, is there any part of the political race happening right now that’s especially interesting to watch from the perspective of someone who’s written this series in which the country falls apart?

I have seen, in this presidential election campaign, just what I’ve been writing about in this trilogy for years. The Great Divide. Between many of the chapters throughout all three books, I’ve included TV news clips, radio broadcasts, and social media interactions, what I collectively call “media noise,” and this media noise has shown a deeply divided America more interested in defeating the “other side” than in fixing problems.

There has been such a lack of respect, understanding, and decency associated with this election campaign so far, and I’m not talking about the candidates. I’m talking about Americans. Only recently, a friend posted on social media, something like, “There is so much vitriol among supporters of different candidates. Why can’t people disagree but still be respectful?” to which another friend responded, “I know! It’s like people are stupid idiots stooping to the level of [candidate].” And I wonder if my friends see the irony there, complaining about a lack of civility and respect by being disrespectful and anything but civil.

It’s all very sad. I try to stay out of it all, keeping to my books.

Q: Because the series describes a Second Civil War, I’m curious if you get responses from readers taking a stand on which side they’d take if they were in Danny’s shoes? Does the response you get from readers differ in various parts of the country, or in terms of urban vs. rural readers?

I worked very hard to make sure the Divided We Fall trilogy presents all sides of the conflict, that there are no villains, no heroes, but that it instead shows the country as it is, full of people who want the best for America, but who disagree profoundly about what is best. I wanted to show people who get trapped deeper and deeper in their political camps until there is no way out. For the most part, I think I have succeeded. Almost every review, supportive or constructive, grants that the trilogy is not biased propaganda.

But readers bring their own experiences to every story, and I do hear from some readers who seem to support Danny’s fight against the Fed or vice versa. One young reader sent me a message, closing with “Rise up! Long live the Brotherhood.” I wonder what this reader will think after the revelations about the Brotherhood of the White Eagle in The Last Full Measure.

Q: Have you ever gotten feedback from people involved in the militia movement?

I can honestly say that, to my knowledge and tremendous relief, I have not heard from any readers who are involved in such movements. I would be afraid if I did hear from any such people, not because I agree or disagree with their positions, but because I fear the United States government is monitoring the communications of such groups, and I don’t wish to also end up on such watch lists. I’m a writer, not a radical.

Q: You were so great in joining Spokane County Library District for our first NaNoWriMo writing conference last fall. How important is being part of a writing community to you, personally, and in your work?

I had so much fun teaching writing classes for the SCLD writing conference. I was honored by the invitation, humbled by the hospitality, and excited to meet so many writers and to have the chance to speak with them. The writing community, in Spokane and elsewhere, and particularly the Kid-Lit writing community, is nothing short of wonderful. The support and camaraderie  helps counterbalance the loneliness that sometimes comes with the writing life.

Moreover, when I think about all the writers who were kind enough to help me as I worked to become a writer, I feel as though it is an obligation and a privilege to help other writers. In fact, “Always help other writers,” is Rule 2 in my list of Rules for Being a Writer. I hope I was of use to the writers at the conference, and I hope to find more opportunities to be of service in the future.

Q: What’s the best thing a reader has ever said to you about this series?

I don’t hear from as many readers as some writers do, so I am thrilled when I do hear from readers. What a kindness, what a blessing, they offer me, not only taking the time to read my books, but then contacting me about them. I’m always so happy to see a note from a reader.

Through the years I’ve been working on the Divided We Fall trilogy, I’ve heard from several readers, generally young men, who have confessed they don’t read many books, or haven’t enjoyed reading in the past. They go on to tell me that Divided We Fall was different for them, the book that got them started reading or that helped them get through a free reading assignment that they were otherwise sure would have been terrible for them. That’s a tremendous honor, I think, the idea that something I’ve written might be the book that turns them around on reading.

Q: I know from following you on Facebook that you have a deep appreciation for the libraries of the world. Do you have a particular favorite, either visited or yet-to-visit?

I literally ache when I look at my collection of photos of beautiful libraries. In my own home, I’ve installed beautiful, high bookshelves complete with a rolling ladder. Books are very important to my life, not merely a career or source of income, but an entire way of life. It’s exceedingly difficult to choose a favorite library. Besides the library that dominates my large living room, I was amazed by my visit to the Morgan Library in New York. That place is not only beautiful, but it also has three Gutenberg Bibles as well as countless other rare, precious, gorgeous books. I don’t generally suffer from a tremendous desire to be rich, except when I’m among wonderful, often very expensive, books.

Q: And finally, what’s next? Do you have any new novels in the works?

I always have new novels in the works! I never stop working. If the question is do I have another book eventually heading toward publication, the answer is yes. I do have another novel coming after the Divided We Fall trilogy and The Last Full Measure. Unfortunately, I cannot reveal much about it at this point. It will be very different from what I’ve done so far. And that is a good thing. I’m eager to branch out and challenge myself to try new things.