Tribbles, and Klingons, and Starfleet Oh My!

Monday marks the 48th anniversary of the Star Trek premiere on US television. Six television series, 30 seasons, 726 episodes, 12 movies, and countless books later, it’s still going strong. It’s also my absolute favorite fandom ever. From the original series to the newest movies, I embrace the Trekker label with pride.

It’s also possible my Trekker status was determined at birth, and I never had a choice at all. For the record, I’m completely okay with that possibility! My dad is an avid Star Trek fan who has seen every episode and movie and probably read most all of the seemingly endless number of Star Trek fiction that’s been written. As soon as he realized that at least one of his children would be able to tell a Cardassian from a Klingon, he was happy to share that love with me.

The universe Gene Roddenberry created amazes me—I can’t get enough of the possibility of what’s to come: space exploration, alien races, new planets, androids, and more. I can still remember the joy that was getting a 10pm bedtime. I was finally able to watch the nightly reruns of Star Trek: The Next Generation with my dad. By this point, I had seen all of the movies, and tons of reruns that would air sporadically through the week, but never regular episodes like this.

To this day I hold Star Trek in all its forms near and dear to me, and while the movies and books are often phenomenal, the television shows are what set the stage for everything else. And because the 48th anniversary of the original episode airing is just around the corner, I’ve decided to celebrate by sharing the best (at least my best) of Star Trek with you!

It all began with Star Trek: The Original Series. While this series may have had some of the campiest and convoluted episodes, they were always interesting. “The City on the Edge of Forever” is easily one of their greatest episodes though, showcasing time travel in a way that challenges viewers. Kirk and Spock chase a drugged McCoy back through a portal to 1930s Earth in an effort to prevent history from being changed. To prevent a heinous future from occurring, Kirk is then forced to let Edith Keeler, a visionary young woman he’s come to love, die. Rather than a fun gimmick, the writers used time travel in a profound way to examine our choices and how they affect the future. I also appreciated that Kirk seemed to grieve for her losing the opportunity to see the future she’d dreamed of as much he did for her death. 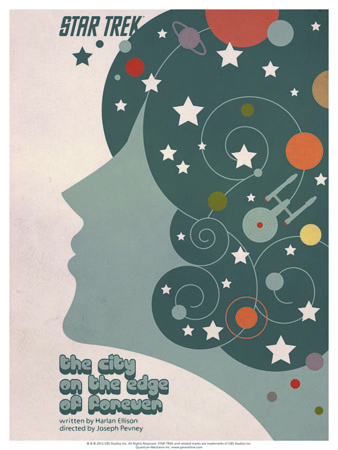 If you’re a fan of the original series, or even just 1960s style artwork, you have to take a look at Star Trek: The Art of Juan Ortiz. Each episode is featured in a movie-style poster which highlights the key points of the episode as seen through 60s era illustrations and artwork. I particularly liked how the poster for “The City on the Edge of Forever,” captures Edith’s own vision of the future (rather than her sad demise).

I’m a bit ashamed to admit that until a few months ago, I had not seen any of Star Trek: The Animated Series, but I’ve certainly been making up for lost time since then. While not officially part of Star Trek canon, the episodes introduce a number of elements used in later episodes and films. They also feature some innovative and imaginative storytelling. For me, “Yesteryear” is easily its best episode as it delves into the background of one of my favorite characters: Spock! It also features a second appearance from the Guardian of Forever, the same structure that sent him back with Kirk and McCoy in “The City on the Edge of Forever.” For anyone wanting to see some of the original Spock backstory, this is the episode to watch.

After several movies and a long television hiatus, Star Trek: The Next Generation premiered to absolutely no expectations. Patrick Stewart (Captain Picard) didn’t even bother unpacking his bags for the first few months, thinking the show would bomb. Instead, it became a well-loved piece of science fiction history, and arguably the best series in the franchise. Picking a favorite episode was near impossible, so I cheated. The series finale, “All Good Things,” is actually two episodes and features an overlapping plot line as Captain Picard travels between the present, his first few days on the Enterprise, and 25 years into his future. The episode itself brings the show full circle in a stunning way. And as an added bonus, we get one last glimpse of Q and Picard’s often hilarious interactions.

Star Trek: Deep Space Nine did something the previous series hadn’t by setting the show on a space station. Although they spent far more time reining in unruly patrons at Quark’s than exploring the galaxy, this series seemed to have the best character development of them all. Because of its darker tone, my undisputed favorite episode is one that brings that bit of levity that Deep Space Nine greatly needed at times. “Trials and Tribble-ations” was a homage to the original series, and a gift to fans everywhere. You have to love Dax chucking tribbles onto Kirk and Bashir and O’Brien getting chewed out after a bar fight. Even better was Worf’s obvious tribble hatred, and Odo’s dry response to their eradication, “Another glorious chapter of Klingon history. Tell me, do they still sing songs of the great tribble hunt?” 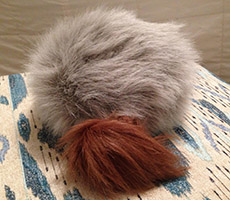 In order to watch this episode right, I had to drag out my own tribble. I also made it a small friend because, after all, there’s never just one tribble for long. For the crafty Trekkers out there, there are an unlimited number of crafts you can try to show off your Star Trek love. Pinterest is a great resource, as is the Star Trek Craft Book, where I got my tribble pattern.

If Deep Space Nine was everything the previous series hadn’t been, Star Trek: Voyager was a return to tradition. Talk about exploring new worlds, the Voyager was shoved into a whole new part of the galaxy, and tasked with exploring it while trying to find a way home. The two-part “Year of Hell” episodes were the first time I seriously wondered if they would actually make it. When they encounter a ship capable of making significant historical changes to an entire region of space, they struggle to survive. Obviously I knew they’d make it past that episode (there are several more in that season alone), but would the crew ever just stop the one-track trip home, and enjoy exploring someplace completely new to them? Because of that journey, episodes like these—where the idea of never making it home is dangled in front of them—resonated very clearly with me.

The final (so far) exploration of the Star Trek television universe was through Star Trek: Enterprise. Set before Kirk’s first voyage was even a glimmer in his eye, we got to watch the voyages of the first starship Enterprise. As a prequel, the show provided backstory to several plot points featured in previous series like the Borg’s arrival on earth in the First Contact film and Data’s eugenics connection. The best tie in to the other series though was undeniably “In a Mirror, Darkly,” Enterprise’s take on the mirror universe. Set entirely in the alternate universe, the crew gets into a conflict with an alien race that has recovered the USS Defiant (which ties to another original series episode). The opening credits alone, which show a visual history of this mirror-world, would make this my favorite, but the evil characterizations of the crew, especially the nefariously dark Dr. Phlox, are amazing.

There are so many different pieces of Star Trek, that this only scratches the surface. If you want to go forth and boldly explore some other avenues of Star Trek, there are also a number of encyclopedias and companion guides that offer information about key characters, species, planets, and plot points from each series. The technical specs books for the Enterprise and Klingon Birds of Prey also offer a behind bulkheads look at what’s running the ships. They’re also seriously making me what to build my own ship! Anyone want to help?