What I learned from Michelangelo 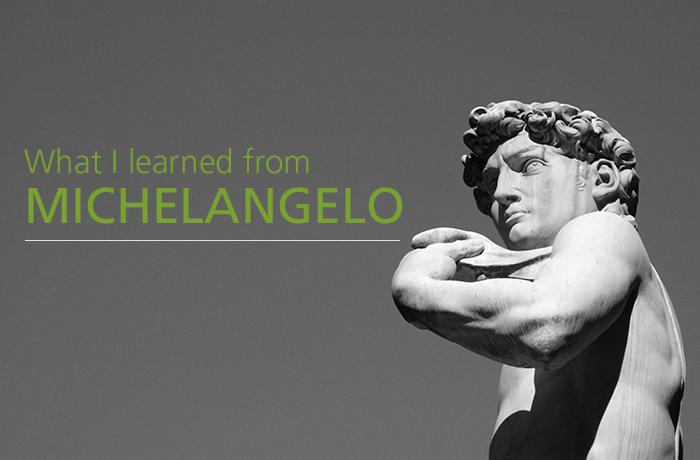 I went to Italy and got smitten with Michelangelo Buonarroti. Yeah, yeah, yeah… the David, the Pieta, la Cappella Sistina. His work knocks us all off our plinths. But as I walked the cobblestones of Firenze (Florence), stood in the shadow of the Duomo, and watched the Arno ripple under the Ponte Vecchio, I grew increasing curious about the man—boy, really, for he chiseled his first marble sculpture at fifteen.

And I don’t know how anyone pursuing a creative life could walk among his masterpieces and not hope to glean some sliver of the mystery of how he did it. How one man could carve marble, paint plaster, fashion buildings, and assemble words in sonnets that still live and breathe so powerfully five hundred years later.

So, as I licked my way through cone after cone of gelato, I tried to satisfy my hunger to learn about Michelangelo and apply what I could to my writing process. One thing for sure: I’ll never again complain about an editor after hearing about a guy trying to please the Pope. But here are four ideas I’m reflecting on.

Reverence for the materials of your art

Michelangelo got a new set of nine chisels whenever he started work on a fresh piece of marble, chisels he fashioned himself. He tempered the iron, building an intense, even heat in the forge, as he had learned while among stonecutters as a small boy. And his marble—he had a lover’s passion for the stone he cut. I’ve always been fascinated by words, my material, but Michelangelo’s tenderness for marble made me want to embrace language with greater appreciation. He respected his material, sometimes battling it, sometimes coaxing it, seeing its flaws, understanding its grain and crystalline structure. What I’d most like to emulate is the joy he found in materials he worked with and the reverence he had for them.

From his first apprenticeship at thirteen to some of his most well-known works, Michelangelo copied. Though his father disapproved of the boy’s resolve to be a sculptor and literally, tried to beat the art out of him, Michelangelo spent hours in the churches of his city studying and sketching the work of his predecessors, like Donatello and Ghiberti. From the beginning, he tried to imitate ancient Greek and Roman art.

His Adam reaching fingers toward God is said to be modeled after an ancient Greek river-god sculpture. The face of his God of The Creation of the Sun, Moon, and Plants looks very like the face of Laocoön battling snakes in the sculpture Laocoön and His Sons, which is considered one of the greatest works of Greek Sculpture. But, of course, Michelangelo copied and then added something uniquely his own. He took the classical idealized form of the human body and added a distinct realism, movement, and emotion. Writers are told there are only three stories with endless variations. The challenge is writing a variation that no one else could imagine.

Open your eyes to the world

Michelangelo didn’t just copy other artists, he used the real world for inspiration. The most powerful example is his dissection of the human body, but I’ll leave that for my next point. When sculpting a cupid, he went out into the city and sketched every baby he could find. Before beginning his Battle of the Centaurs, he sat for hours observing the men working in a Settignano stone quarry. He sketched the muscles of shoulder and back, the tension in a hand, the bend of a knee, and when the workers lay down for a nap mid-day, he drew them resting, an arm flung out, a face tranquil. Another time, to gain inspiration for painting unearthly demons, Michelangelo went to the fish market to study forms and fins and the color of sea creatures’ scales. I’d like to stop trying to cross things off my to-do list long enough to deliberately use my senses, to fill my mind with vivid images that will leap off the page and touch readers.

Back to that dissection. In Michelangelo’s time, violation of a corpse, as it was called, was forbidden by the Catholic Church, and the punishment, should you be caught committing such a sin, was death. In Medieval times artists portrayed their subjects with ethereal bodies or covered them in long flowing robes. But Michelangelo wanted to sculpt realistic human bodies and believed that to do so, he must understand what happened under the skin, how the body worked. He took great risks to discover this. I’m not suggesting lawbreaking or sinning as a way to improve your writing, though both could make a good story. I’m challenged by this idea of taking risks in my work. Sometimes, it feels risky to put in all the time and effort of writing a novel with no guarantee of publishing success. Or to write what I really believe in a blog post and feel naked hanging out there hoping my words will connect with someone. But mostly, I’m already all in. I’m several years into that novel and I don’t plan to quit. I’m committed to posting on my blog, even if few people read it.

The risks I need to take now are not so clearly defined. What risk is required to take that novel to the next level? What do I do to see what I’m not seeing? Where do I let go to allow space for something fresh? I’ve pinned W.H. Auden’s line to my desktop, “The sense of danger must not disappear.”

I’d enjoy hearing from you. What feels risky in your creative work? Does Michelangelo or some other accomplished writer or artist inspire you?

Mary Cronk Farrell is a presenter for the panel Publishing Toolkit for Middle Grade & Young Adult Fiction on Saturday, Oct 29, as part of the NaNoWriMo Readiness Conference. 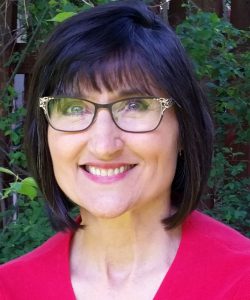 Mary Cronk Farrell is an award-winning author of Children’s/YA books and former journalist with a passion for stories about people facing great adversity with courage. Both her fiction and non-fiction titles feature little-known true stories of history based on thorough research, including Pure Grit : How American World War II Nurses Survived Battle and Prison Camp in the Pacific and Fannie Never Flinched: One Woman’s Courage in the Struggle for American Labor Union Rights, forthcoming on Nov 1, 2016. Her books have been named Notable Social Studies Book for Young People, SPUR Award for Best Juvenile Fiction about the American West, Bank Street College List of Best Children’s Books, and NY Public Library Best Books for Teens. Her journalistic work has received numerous awards for excellence from the Society of Professional Journalists and two Emmy nominations.