Captivating Chocolate: Q&A with Karen DeCristoforo of the Chocolate Apothecary 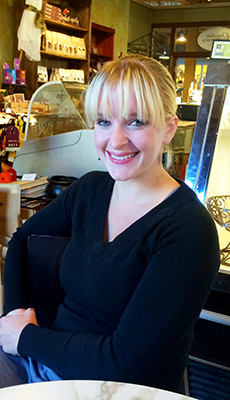 The Flour Mill, located just outside of Spokane’s lovely Riverfront Park, has been a place of fun, funky shops, and tasty treats since I was a little girl. About seven years ago, the Chocolate Apothecary joined the tenants in the Flour Mill and has been serving specialty chocolates, gourmet drinking chocolate, and other delectables ever since.

Barista and Chocolatier Karen DeCristoforo makes the Chocolate Apothecary particularly special. With the sweetest of smiles, Karen is quick to share her passion for, and knowledge about, chocolate. Not only does she know about the vast variety and recipes for chocolate, she knows its history spanning thousands of years. The Spokane County Library District is delighted to feature Karen in upcoming programs about the history and flavors of coffee and chocolates. (Click here to learn more about the program, check availability, and register). I recently joined Karen at the Chocolate Apothecary to learn more about how chocolate became such a big part of her life.

How and when did you get interested in chocolate?

It was when I was about 10 years old and it was crazy happenstance. My mom worked for Cascade Earth Sciences in its Spokane location. They had an office fire and Corporate held a meeting to decide whether to rebuild. My mom knew it would be stressful so she made and brought little chocolates that were shaped into firefighter hats and fire engines.

I went out with mom to get the chocolate and the molds. I helped her melt and make the chocolates. From then on, when there were special occasions I made chocolates. I have more chocolate molds than anyone has a right to–high heels ones and all sorts of things. As years progressed, my family became involved in the local Renaissance Faire. I sold chocolate there and, just have never got away from chocolate.

Is it true that you actually studied chocolate in college?

At 19 years old I was getting ready to do my capstone thesis for my bachelor’s degree in history. My teacher felt strongly that we should do our projects on something we love and not just a theme. I chose the history of chocolate. I wrote about the history from its discovery to the 1900s and to the candy we know today. It was the easiest A ever got! It probably helped that I presented the paper with samples that included Spanish mousse from the 1700s and French drinking chocolate.

Later, I was invited to present my thesis at Phi Alpha Theta (National Honor Society for History Majors). I came in third, which was just shy of moving on to national competition. But it was fun, and I used the paper to help get this job.

How interesting! Tell me some more about the history!

Spain recognized that chocolate should be coveted. They really didn’t tell anyone about it when they had it. Then in the early 1600s, Anne of Austria, who was the daughter of King Phillip III of Spain, was betrothed to King Louis XIII of France. She said she wouldn’t leave Spain without her drinking chocolate. She married King Louis because she could bring it. Around that time, people were also starting to bake and cook with chocolate—like a mousse of some kind.

How did you end up working for the Chocolate Apothecary?

I went on to get a Master’s Degree in Fashion Design. After that I got a job in the Spokane Falls Theater Department to work on costumes. During the summer I would get odd jobs to help make ends meet. Last year the Chocolate Apothecary put out an ad out for a sales person/barista. Back then, I knew that coffee comes in regular and decaf, but not much else. I was interviewed and brought in some proposals on chocolate, and my thesis. And now, here I am.

Does the shop offer tastings?

Yes, they were doing chocolate tastings and programs before I got here, but now I add my flair and can answer detailed questions.

What do you have planned for Sip & Savor (the Library and Revel 77 program)?

I will discuss where chocolate comes from and what goes into it. Then we’ll talk about how to eat and taste it. Chocolate should be sensed by all five of our senses.

The program will also include tastes of five single origin bars of chocolate. The attendees will be able to taste the differences among country and experience whether it is citrusy, floral or pure chocolate.

What is single origin chocolate?

Not all chocolate is created equal. One bean from a certain strain from a particular county might be awful while some are great. For companies to create a product that has consistent flavor, they buy from mixed origins to spread out the sources so one bad crop doesn’t ruin everything.

Single origin is what it sounds like. It has only one variety of cacao harvested from one region. It can be hard to come by and is often from Columbia or Peru. 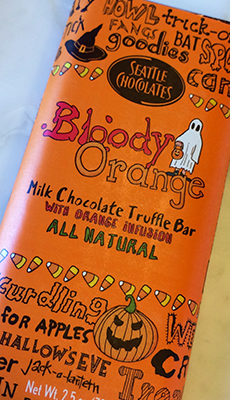 I recently learned about “specialty coffee.” Is there a similar new movement in the world of chocolate?

Not new necessarily, but people are interested in single origin and fair trade chocolate. Cadbury, in the UK, became fair trade a few years ago. I’m not sure if they have here. It is an important issue because so much chocolate is produced by slave labor. Our chocolate at Chocolate Apothecary is very consciously sourced.  We are aware of where it’s coming from and how it is made even if it isn’t labeled “fair trade.”

So what is your favorite chocolate?

I could no sooner pick a favorite star in the sky! Today, my favorite is Seattle Chocolates’ Bloody Orange Truffle Bar for Halloween. Who knows what it will be tomorrow!