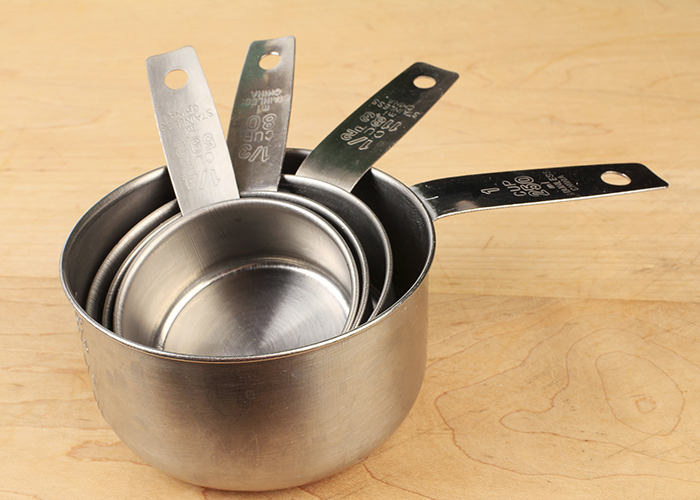 I survey the damage and sigh. There are lemon seeds strewn across the counter. Pumpkin and sunflower seeds are scattered about the floor. Measuring cups, mixing bowls, and cutting boards fill my sink. I hate cooking with my kids.

To be fair, I hate cooking with anyone. I believe preparing food is best as a solitary exercise. A really good cooking session for me is akin to meditation. I find a rhythm, get in the zone, and lose track of time. Having someone else in the kitchen ruins my flow. I do not achieve Zen. The Type A side of my personality struggles to stifle a scream when the other person uses a steak knife to cut a carrot.

This is not to say I can’t handle having someone else cook in my kitchen. I just don’t want to be present when they do it. Send me off on my merry way with a cup of coffee or glass of wine and call me back when the food is ready.

I am certain my mom had a hand in teaching me how to cook. However, I don’t remember it. Sorry mom. I do have some early memories of coming home from school and blending myself a smoothie or stirring up a batch of no-bake oatmeal cookies. In high school, I recall occasionally cooking the family dinner. It was usually a box of noodle-roni with some diced chicken and frozen vegetables thrown in. It wasn’t until I was an adult that I seriously took up the art of cooking. Most of what I learned came from watching Alton Brown on the Food Network and following recipes from my cookbook collection.

So it would make sense that I would convince myself I don’t really need to teach my kids how to cook. If there is a will, there is a way and they will eventually figure it out for themselves. Right? Except that my kids want to be in the kitchen. They want to learn how to cook. They have an interest in preparing food, following recipes, and making their own meals.

I realize that at some point I will need to teach them the fundamentals. So when they are off at college and the cafeteria is closed, they will have the skills necessary to cook themselves a meal. However, there are a great many things I would rather teach my kids than how to cook. I would rather have ten conversations about the birds and the bees than supervise them as they scramble an egg. I would rather play Candy Land until my fingers bleed than teach them how to level a cup of flour.

My oldest, who is eight, is one of those kids for whom most things come very easy. She is a planner and very deliberate with her actions. So when something turns out to be a bit of struggle, she completely loses it. She requires a lot of patience and needs someone with the ability to show her multiple ways of doing things until she finds the one that works for her.

My youngest, who is almost seven, just doesn’t seem to give a hoot. She is passionate and a big feeler, but the girl is in la-la-land most of the time. I can’t tell you how many times she has started walking upstairs with her dinner plate when told to clear the table. So when tasked with scooping some sugar, she will likely start daydreaming about My Little Ponies and half of the sugar will end up all over the counter.

I will occasionally have “good mommy” moments and call them into the kitchen to help cut some mushrooms, peel a carrot, or crack an egg. However, I am well aware that this activity brings out the worst in me. It becomes an exercise in patience and self-control. I have to resist the urge to grab the peeler out of their hand to peel four carrots in the time it takes them to do one. I have to take deep breaths to find my patience as I repeat instructions for the third time. I then worry the experience will make my kids dislike cooking. It’s a vicious circle of self-loathing and guilt for me.

Now this is not to say that they are completely helpless in the kitchen. My oldest, being the more coordinated of the two, can prepare a handful of things. She can even microwave a bowl of oatmeal if mommy is running behind schedule. They can spread peanut butter on a slice of bread, pour a bowl of cereal, slice a banana, and scoop up yogurt. But cooking—the peeling, cutting, stirring, scrambling kind of cooking—we aren’t there yet.

I am the cook in my house, so I know it’s my job. Everyday blog posts and articles with tips and recipes for cooking with your kids remind me of this. I see commercials and movies that display carefree and joyful moms bonding with their kids while preparing cookies, cakes, and other delectable goodies. And all I can think is…Who has time for that? Why don’t I enjoy this? How is she not fat from eating all those baked goods?

So recently when my girls decided they wanted to attempt a recipe, my heart sank. When my kids set their minds to something, it’s on. They will dive into it headfirst with gusto. I could tell I would not be able to talk them out of this newfound interest. I cringed in dismay as they began leafing through my Betty Crocker Cookbook. I gently discouraged starting with such difficult recipes. Knowing I could buy myself another day or two, I offered to check the library for some children’s cookbooks. I brought home three and they hungrily began looking through them, affixing sticky notes to the recipes they thought looked good. After the initial burst of interest began to wane, it was another couple of weeks before they finally badgered me enough to add the ingredients to my weekly grocery trip.

The execution was a nightmare. My youngest picked a trail mix recipe. Easy right? Even though no cooking was involved, there was a lot of measuring and stirring. Half the mixture ended up on the counter and floor. Twice I had to leave the kitchen, go into the garage (where the husband was tinkering), and vent about how inept our children are and swear I would never cook with them again.

My oldest had picked a frozen, slushy citrus dessert. It required squeezing several oranges and lemons, a task for which she didn’t have the hand strength, so I ended up doing it for her. Don’t even get me started on watching your child try to cut a large, rolling piece of fruit in half. I dang near had a heart attack and ended up doing that part as well. The second part of the recipe called for stirring the mixture every 30 minutes while it froze. My child does not have the patience for this and fits were had. At that point, I had nothing left to give. So I grabbed my purse and keys and headed out the door, leaving the ever-patient husband to take over during the stirring and freezing phase.

This experience seems to have satiated their appetite for cooking—for now. They learned the importance of working as a team, reading a recipe, following directions, and enjoying the fruits of their labor; so, the experience wasn’t without its merits. I also took the opportunity to point out what hard work it is to prepare food. Shameless self-promotion. But hey, a mom’s gotta do what she can to get a dose of appreciation.