Dance like You’ve Got Ants in Your Pants: Q&A with Eric Herman 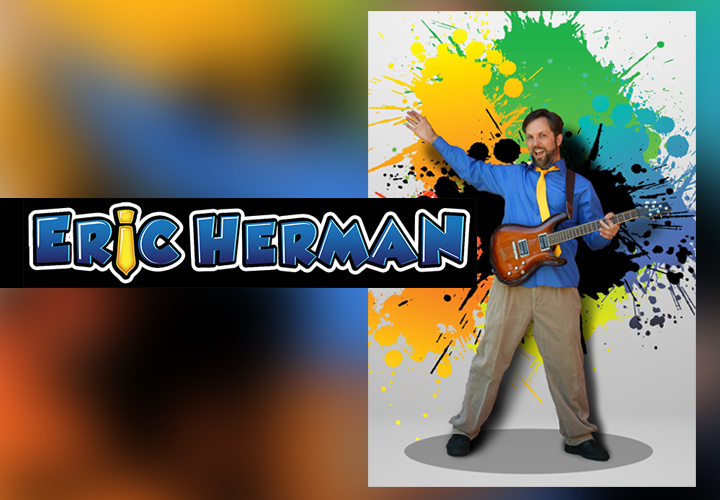 We’re ready for comedy, creativity, audience participation, and outrageously amusing songs this summer. And we hope you are too!

Eric Herman performs his cool tunes at our libraries, July 17–21. I reached out to Eric with a few questions and learned a bit about how Siri, poets, and kids influence his music. I hope you enjoy this online Q&A with fun and funny musician Eric Herman. If you do, then be sure to come out to the library to experience Eric Herman’s Cool Tunes. And bring the whole family!

Erin Dodge: When did you discover your talent for making music that kids and families love?

Eric Herman: I’d been making music and performing in various ways for many years. Some of what I did was very serious (I’m giving you a stern look over my glasses right now), but a good amount of it involved comedy and novelty. I’d also been doing a lot of live theater, and I think the combination of “fun” and “theatrical” worked well for a kids’ audience. When I wrote my first kids’ song—“The Elephant Song”—I wasn’t sure if kids would find that entertaining or just think I was a big dummy. Turns out it was both!

ED: Where and how do you find ideas and inspiration for your songs?

EH: I just ask Siri on my phone: “Siri, can you give me an idea for a song?” When that doesn’t work (which is every time), I have to go with a combination of life experiences of my own, observed experiences of others, and subjects that I find interesting or amusing. It can happen a thousand different ways. A lot of times I’ll have the music first and a vocal melody, and then I’m just humming and scatting until some words or phrases start to come together and suggest an idea. For one of my newer songs, “You Are What You Eat,” I happened to sing a phrase that rhymed “enchilada” with “empanada,” and so the food theme jumped out from there.

ED: I’ve read that you have worked with poet Kenn Nesbitt and others when writing songs for kids. How important is collaboration in your creative process?

EH: Yes, Kenn and I have worked closely together on some songs, and for some songs I just took a poem of his, as is, and made a song from it. He prefers the latter method, as it means less work! All of the songs on my latest album, Bubble Wrap, were a collaboration with my band, and it was important to be able to have more ideas and approaches to music to add to the mix. I have a pretty good source of creativity on my own, but sometimes that can get a bit dried up, or I feel like I want to go back to a place I’ve been before. So it’s often good to bump my mind around into different places where only other people can bring me. Creating music with others and simultaneously feeling a song come together is an incredibly rewarding experience.

ED: Speaking of collaboration and “The Elephant Song,” which is your biggest YouTube hit so far, that song is collaborative as well as funny. You perform it with your daughter Becca (when she was 3 years old). Your live shows are also known to be very interactive. What draws you to performing for and with kids?

EH: I love performing for kids. They are incredibly generous and also open to new ideas and sounds. Grown-ups tend to have their musical style of choice—“I like country music,” “I like rap,” “I like heavy metal,” “I like bagpipe polka punk.” Kids might have influences in certain directions from what their parents and siblings listen to, but they’re also very willing to just come along for the ride of whatever you offer, as long as it’s fun and engaging. I love to explore a pretty wide variety of musical styles and ideas, so that was hugely appealing to me about doing music for kids.

ED: What advice do you have for young, aspiring musicians and performers?

EH: You can do it! Your mom or dad or math teacher might say, “You can’t be a musician! Get a real job!!” But I know many people who make a living making music, in some capacity or other. It’s not easy, but it can be done, especially if you are driven and have a passion for it. That being said, do it because it’s fun and because you love to create and perform, and for the love of the music itself, without any expectations beyond that. And be yourself. You are your own most important audience. Find your own style and voice, and put it out there on the stage of life.

**A sign language interpreter will be at this program. 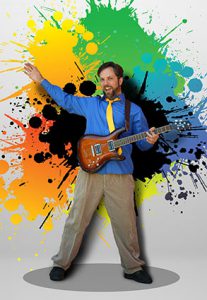 Eric Herman lives in the Pacific Northwest and travels around the U.S., performing concerts and elementary school assembly programs for kids and families. His shows have received rave responses from kids, parents, educators, and event coordinators wherever he performs. Eric Herman’s “cool tunes for kids” are at once ingeniously witty, indelibly memorable, and incredibly fun. His videos, led by the viral hit, “The Elephant Song,” have become hugely popular, with over 50 million views online. Eric’s songs and videos have been featured nationally on PBS Kids, XM Radio, Fox & Friends, The Today Show, and in the Warner Bros. film Life as We Know It.