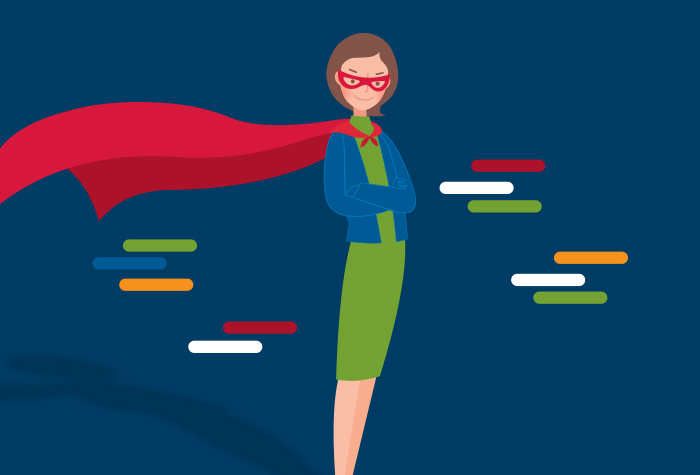 Sometimes, when I find myself in the mood for an upbeat, quick read, I look to the library’s graphic novel sections.

Traditional super-hero stories aren’t my cup of tea. I find myself drawn more to the stories that include strong, primary female characters. Luckily these days, there are quite a few great female characters we can see and read about in comic books, and for readers of all ages. 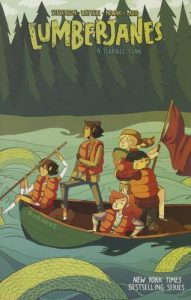 Lumberjanes, by Noelle Stevenson, Grace Ellis, Brooke Allen, and others

Lumberjanes follows a group of friends at Miss Qiunzella Thiskwin Penniquiqul Thistle Crumpet’s Camp for Hardcore Lady Types (a.k.a. Lumberjanes Scout Camp). This group of girls has tasked themselves with solving the mysteries that surround the camp, which is situated in the middle of a magical forest that is home to supernatural creatures. All kinds of adventures (mis-adventures really) follow, resulting in hilarity and adventure. This series is a must read! 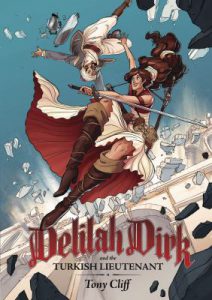 Delilah Dirk and the Turkish Lieutenant, by Tony Cliff

Delilah is the woman I wish I could be. She is a world traveler and adventure seeker, and she doesn’t care one lick what other people think of her. She gets herself out of seemingly impossible situations on an almost daily basis using her wit and skills. In volume one, the Turkish lieutenant has a chance encounter with Delilah during one of her escapades and finds himself caught up by Delilah’s adventuring spirit. 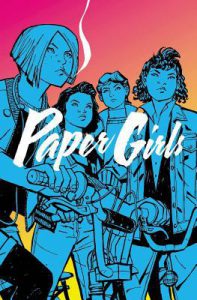 Preteen paper deliverers find themselves mixed up in some kind of otherworldly drama. This graphic novel is full of female bonding, girl power, and all-purpose butt-kicking—all you could ask for. Still a fairly new series, the third installment is to be released August 2017. The first two are available for checkout at the Library District. 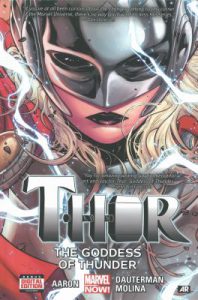 Thor: The Goddess of Thunder, by Jason Aaron, Russell Dauterman, Jorge Molina, and others

Okay, you got me. This one is a superhero story. And it’s fantastic. I’m not particularly a fan of Thor (see above, regarding super-hero comics), so in the opening pages of this graphic novel when I learned that he’d lost his hammer, I didn’t care much. But once the new Thor came on the scene, I was hooked. And, apparently Thor is a gender-neutral name (though many of the Asgard folk struggle with this). I love that the female Thor isn’t given some dippy name like Thorette or Thorella. She controls the hammer, so that makes her Thor (It is Thor’s hammer, after all!). Plus she’s tough, brave, smart, and kicks butt better than her male counterpart, especially now that he’s hammerless. 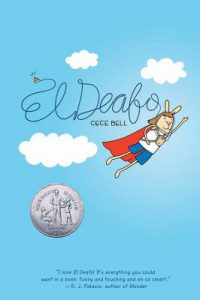 Starting at a new school and making friends are hard for anyone, but especially so when you’re wearing a gigantic hearing aid around your neck! In this sweet and funny graphic novel memoir, Cece learns how to harness her superpower of being able to hear her teacher no matter where she is in the school (for better or for worse!), and becomes “El Deafo, Listener for All.” 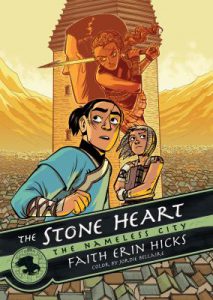 This graphic novel came to me serendipitously. I had left my current book at home and needed something to read during my lunch break! I wandered over to the children’s Books-to-Go section and there it was, waiting for me.

I’ve enjoyed all of Hicks’s books so far, and this one did not disappoint. The Nameless City is a beautiful, central city located by a great mountain pass, somewhere in a mythological Asia. Kaidu, a soldier recruit new to the city, and Rat, an orphan girl who grew up on the streets of the city, form an unexpected friendship, resulting in the prevention of a political coup. 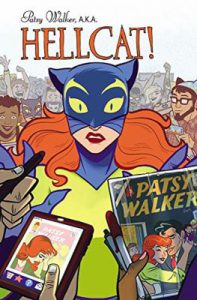 Yes, another one about superheroes. . . I guess I am more of a fan than I realized! This graphic novel is your quintessential fun read. While some of Patsy’s closest friends are well-known characters with darker storylines, Leth has created an upbeat universe for Hellcat (a.k.a. Patsy Walker) and her friends the Hulk and Thor. While they battle evil villains and accomplish mundane human tasks, they still find time to have fun in the sun.

Here are some more graphic novels with strong female characters: Ms. Marvel written by G. Willow Wilson, Saga written by Brian K. Vaughan, Rat Queens written by Kurtis J. Wiebe, Friends with Boys written by Faith Erin Hicks, In Real Life written by Cory Doctorow, and Nimona written by Noelle Stevenson. I encourage you to explore these titles and their stories to discover all the great female-centric graphic novels that are being published every year.

You can find graphic novels on hoopla—a free, online resource found in the Library District’s Digital Library and available to library card holders. Hoopla is a great place to find movies, TV shows, books, audio books, and music! You can search for specific titles or browse collections. Reading comic books digitally is easy and enjoyable because you can click on each frame for a closer look!