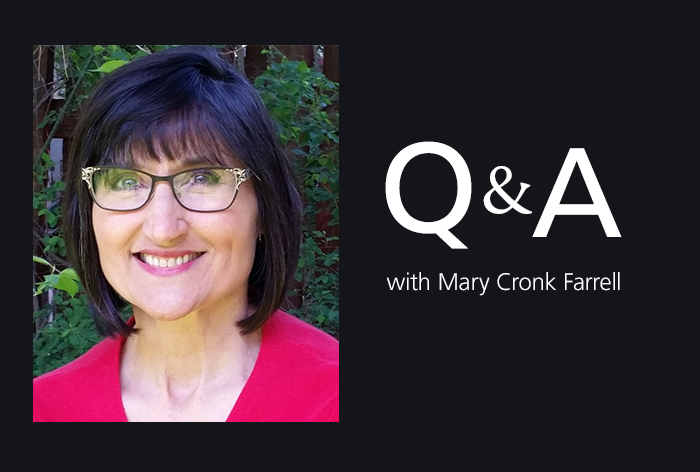 Local author Mary Cronk Farrell writes about the kinds of people whose stories aren’t widely told, but ought to be. In Pure Grit: How American World War II Nurses Survived Battle and Prison Camp in the Pacific, she tells the story of nearly 100 army and navy nurses who struggled to not only survive repeated battle zones, near-starvation, and harsh POW camp conditions but also care for the severely wounded soldiers in their care. 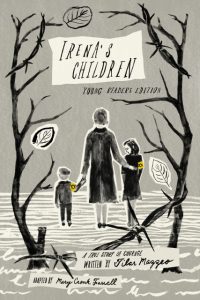 In Irena’s Children: Young Readers Edition, she adapts the text of Tilar J. Mazzeo’s book for adults, Irena’s Children: The Extraordinary Story of the Woman Who Saved 2,500 Children from the Warsaw Ghetto. And in her forthcoming book, Fannie Never Flinched, due out on November 1, she introduces readers to Fannie Sellins, a widow and laborer who fought for better working conditions in sweatshops and coal mines in the early 1900s.

With a background in journalism and the heart of a historian, Farrell digs into original sources, archives, and oral histories to present the lives of ordinary, but deeply courageous, individuals in a way that will engage tween and teen audiences. With two books coming out this fall (Irena’s Children in September and Fannie Never Flinched in November), we thought it would be a great time to ask Mary a few questions about writing, research, and how ordinary people display extraordinary courage.

Q: Irena’s Children: Young Readers Edition tells the story of a remarkable Polish Catholic woman who risked her life—repeatedly—to help the Jewish people suffering in the Warsaw ghetto. How did you come to write the adaptation for young readers, and how were you able to convey the many terrible things that Irena witnessed in a way that wouldn’t be overwhelming to tweens and teens?

The invitation to adapt Irena’s Children was a totally unexpected opportunity that came from an editor I had met seven years ago at a Society of Children’s Book Writers and Illustrators conference here in Spokane. My guess is that in looking for a writer for this World War II project, she saw my book Pure Grit about WWII nurses and remembered meeting me. I was thrilled when she contacted me because I already admired Irena Sendler’s courage and had written about her on my blog.

I was overwhelmed by the cruelty of the Nazis-occupation in Poland and the horrors that Irena faced. It was very difficult to write this story knowing that it might be a young reader’s first introduction to the Holocaust. I kept returning to the courage and love shown by Irena and her friends despite the brutality they saw every day. That’s what got me through the writing, and I hope I portrayed it well enough to give young readers strength and hope as they read about Nazi atrocities. Irena shone a bright light of human compassion in a deep darkness of inhumane hatred and violence. She demonstrated that we always have the option of choosing to do good. 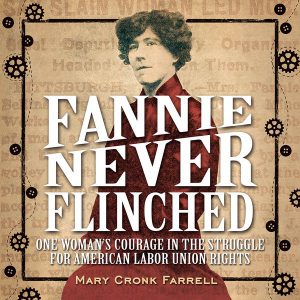 Q: I know you’ve got another book coming out in November: Fannie Never Flinched, which is about Fannie Sellins, a remarkably brave union activist who helped form the St. Louis, Missouri, Local 67 of the United Garment Workers of America.  How did you learn about Fannie? What was the research process like in trying to learn more about someone relatively unknown?

I was researching American labor history to write a teachers’ guide for my novel Fire in the Hole! when I discovered Fannie Sellins. An article caught my eye titled In the Midst of Terror She went out to Her Work.  I wanted to know, what terror? What work?

The article began, “Fannie Sellins was a labor organizer–and from all accounts, she was an exceptional one. But she paid with her life.”

I was off like a bloodhound tracking scent, and by the end of the day, I was determined to write a book about this woman. I was deeply moved by her love for the poor, her selfless courage, and her focus on people’s everyday needs while working for systemic change.

Trying to pin down the facts of Fannie’s story I realized that, for much of history, if you were poor there is little, if any, public record of your life. Those wealthy enough to own land leave a trail much richer in detail. Fannie’s death in 1919 is well documented in public records, photographs, witness accounts, and newspaper articles, but I found very little evidence of her early life. All my early research indicated Fannie was born in an Irish neighborhood in New Orleans between 1865 and 1872. After I sold the manuscript and started revisions, I discovered census records indicating she was born in Cincinnati, Ohio, in 1865.

But early on in the research process, I confirmed enough tiny bits of information to know that I could write Fannie’s story. One of those was newspaper quote from Fannie when she was threatened with arrest for her union organizing activity in Colliers, West Virginia.

“The only wrong that I have done is to take shoes to the little children in Colliers who needed shoes. And when I think of their little bare feet, blue with the cruel blasts of winter, it makes me determined that if it be wrong to put shoes upon those little feet, then I will continue to do wrong as long as I have hands and feet to crawl to Colliers.”

Those couple sentences told me volumes about what kind of woman this was, and it provoked my curiosity to find out more.

Q: Pure Grit: How American World War II Nurses Survived Battle and Prison Camp in the Pacific is another fantastic nonfiction work in which you write about women who were part of pivotal moments in history but whose names are largely unrecognizable. How do you find your subjects, and how do you decide when you have enough material or a big enough story for a book?

With the WWII POW nurses, it was similar to my experience with Fannie Sellins. I found out about them almost by accident, and I couldn’t believe I’d never heard of them! They were the first American unit of women to see battle, and they served with bravery and distinction throughout the Japanese bombardment of Bataan and Corregidor. When American and Philippine forces surrendered, 79 nurses were sent to prison camp. There they set up a hospital and nursed other prisoners, surviving fear, disease, and starvation for three long years.

I’m continually stumbling across amazing stories of courage and perseverance, too many really, to write books about, which is why I also write a weekly newsletter and blog. The decision to write a book rests less on how much material there is and more on how deeply my passion is stirred. I spent five years on Pure Grit, and it took me ten years to get Fannie Never Flinched published, so I have to really love a topic to put that much time and energy into it.

Q: What do you want modern readers to take away from the real-life stories you tell?

I mainly want readers to be inspired and empowered by reading my books and learning about ordinary people who rose to the occasion of their circumstances to accomplish extraordinary things. And not just my readers. I want to give myself hope. I want to encourage myself to act with courage, even just in small ways.

An unintended take away from these real-life stories is that I see so clearly how history repeats itself. I thought I’d see more of what we’ve learned from the past. In Fannie Sellins’ time, many Americans feared and hated immigrants and made them scapegoats for the nation’s economic problems. We see that happening today. In Irena’s time, it was acceptable to violently attack people for their religion or race. Today there’s a rising tide of bigotry against Muslim-Americans. Some African-Americans feel their lives aren’t valued equally with white lives. But it’s not too late. We can learn from the past and young people today are looking for role models, so I hope my stories can provide that.