Jenks jams and juggles at the library 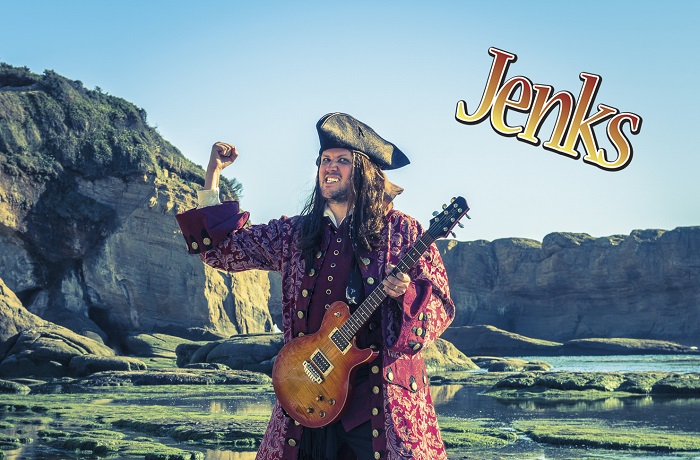 Jenks is a dynamic act that entertains kids and their families with a unique blend of super-cool rock songs, family-friendly covers, head-bopping dance songs, and totally awesome juggling! And Jenks is performing at all District libraries starting Monday, July 25, as part of our summer programs.

I tracked Corey “Jenks” Jenkins down while he was finishing up recording his latest kids album, Adventures Ahoy!, and asked him some questions about his life, his music, and juggling. Now I can’t wait to see his show!

What musical path led you to this moment? What made you decide to strike out as a musician for kids?

I grew up with a great love of music. My dad was a singer/songwriter, and my mom played the piano. When I was young, our family (mom, dad, and six kids) would go Christmas caroling, and we would bust out four-part harmonies. It was super awesome.

In elementary school, I played the clarinet, and then I transitioned to drums. In my teen years, I learned guitar. I’ve never had any formal lessons. Instead I looked at chord charts, learned other people’s songs (The Beatles are great for anyone learning to play guitar), and listened over and over to songs, so I could figure out the drum rhythms.

After college I went to film school, where I wrote and directed a short, children’s film called, “Scott and the Squirrels.” I wrote a song for the film, and that started the whole children’s music thing. It also helped that I had my own kids and had a hard time finding music that they liked that I enjoyed too. So I decided to write rock music for kids. Bam—here we are!

Which comes first, lyrics or melody? How do you approach writing a song like “My Air Shark”?

Most of my songs begin with some sort of guitar riff. When I’m jamming, I’ll just come up with random pieces and they evolve into full songs.

Once I have a chord progression figured out, I start coming up with a melody. Then, once I discover the mood/genre of the song, I write lyrics that fit the song. Sometimes that’s the hardest part. I’ll have music that I love, but no idea on what the song should be about. But it all comes eventually. Or not. I have about five songs sitting on the back burner, because I have no lyrics for them.

Other times, I write lyrics first. In the case of “My Air Shark,” the melody for that song came to me as I was driving home from work. It just popped in my head. That has happened with a handful of my songs, and it’s always surprising when they get written that way. It’s as if the song has always existed, and my brain is saying, “Here I am!”

What’s the best part about performing in front of a packed audience of K-5 graders?

The energy the kids have is just rad! The laughter, the cheering, and the dancing! I love seeing the crazy awesome dance moves the kids create. It’s just a blast.

How long did it take to learn juggling? What advice would you share with someone who is struggling with juggling?

I started juggling with tennis balls when I was in junior high. I don’t remember how long it took to learn how to juggle with just three balls. I will say that it has taken years to master all the different tricks. And adding more objects (beyond 3) is exponentially more difficult, and so rewarding when you eventually get it.

For someone who is struggling with juggling, I would say, first and foremost, “DON’T GIVE UP!” When you’re learning to juggle, you fail over and over again. Don’t let it frustrate you. When I was learning, I would set time goals for myself. I would schedule 20 minutes to juggle. Then I wouldn’t stop until my time had run out. My success with juggling is because I kept going for the whole 20 minutes, no matter what, mistakes and all. My success was not timing how long I had juggled without mistakes and then stopping. You can learn a lot from your mistakes.

Also, everyone should understand that juggling is hard. The human body naturally wants to throw and catch things in a certain rhythm. With juggling, you are training your brain to break that rhythm, and that’s not a simple task.

You’ll get it, if you keep trying. I have taught many people to juggle, including my super cool mom! If mom can juggle, then you can too!

Who and what inspires you and your music?

My family is my main inspiration. My wife and I have four children, three girls and a baby boy, ranging from age 11 to 5 months. We spend a lot of time together doing different activities. I try to observe the funny things from my life and write songs about them. For example, my new song “Sleepwalker” is about all true events from my adventures as a sleepwalker. And I love writing music for my kids. Most nights they go to sleep while listening to a playlist of my songs, and for me that’s just the coolest thing ever.

I also love to laugh. Many of my songs are written to make me and my kids laugh. I also sometimes sneak in references to some of my favorite movies, to see if my brothers and sisters will catch them! It’s really fun.

What advice would you give to young musicians and performers?

Play music because you love it. Perform on stage because it’s fun (though nerve-wracking at first)! The TV shows where a person does a single 90-second performance and then becomes famous—that’s just not reality for most entertainers. Don’t let that be your goal. Perform for anyone and everyone, even if it’s just your family. Don’t be afraid of failure. I have forgotten the words to my own songs. My voice has cracked while singing the national anthem at a basketball game. Last year, I totally ripped my pants in the middle of a juggling set! Laugh at your mistakes, and keep on performing.

Also, learning instruments is hard. The people who are able to really play well are those who don’t give up. Just keep working at it. You’ll get it!

I have always loved the Harry Potter series. The books are magnificently written. When I read them, I feel like I’m transported into another world. The adventure, mystery, and fun are all spectacular. I have read all seven books multiple times, and I will certainly read them again in the future.

A recent book that really inspired me is Hook’s Revenge: The Pirate Code by Heidi Schulz. Last fall Heidi asked me entertain as a pirate at her book release parties in Oregon. It sparked the theme for my new album, Adventures Ahoy. Heidi even consulted with me on the pirate-themed songs on the album, giving me insight in the fearsome world of pirates. And the Hook’s Revenge books are simply excellent. Yarrgh!!! 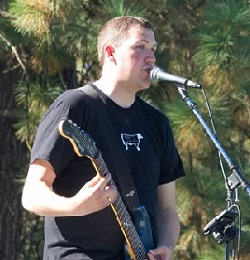 Corey “Jenks” Jenkins grew up in a very small town in Northern Idaho, spending a good portion of his youth in the backyard learning how to juggle—first balls, then clubs, rings, the diabolo (Chinese yo-yo), and the ultimate—FIRE! He also spent years learning how to play instruments, which included teaching himself the drums and guitar. Jenks began when Corey and his sister Annie discovered that there just wasn’t enough cool music for families (there can always be more, right?) and now has 4 albums and a bunch of cool music videos. Corey performs throughout the Northwest for libraries, schools, festivals, church events, and parties. Learn more at www.jenksmusic.com.