Last year, my partner Sheri and I started our own Little Free Library. If you’re not familiar with what Little Free Libraries are, they’re simply containers, usually near a sidewalk or similar publicly accessible space, where people can take and leave books for free.

Little Free Libraries first began appearing in Wisconsin in 2009, but in the last few years, they’ve exploded around the country and in Spokane County in particular. There are now more than twenty here, according to the official map, stretching from Deer Park to Cheney, and articles about Little Free Libraries in the Spokane area have appeared in the Spokesman, KREM, KXLY, and the Inlander (our own gets mentioned in the latter).

Managing our Little Free Library hasn’t been much of a chore. For the most part, it’s been self-regulating, with the “Take a Book, Return a Book” slogan pretty much describing how it’s been used. Nonetheless, the collection does require a bit of curating from time to time. Sometimes, when the shelves have gotten cluttered, I’ve had to set aside the extras, or when the selection has gotten stale, refresh the collection with a few new books from a local thrift store or Friends of the Library booksale. But taking at least something of a hands-on role in maintaining our tiny collection, and observing how people have chosen to use that space, has been rather enlightening in a number of ways. 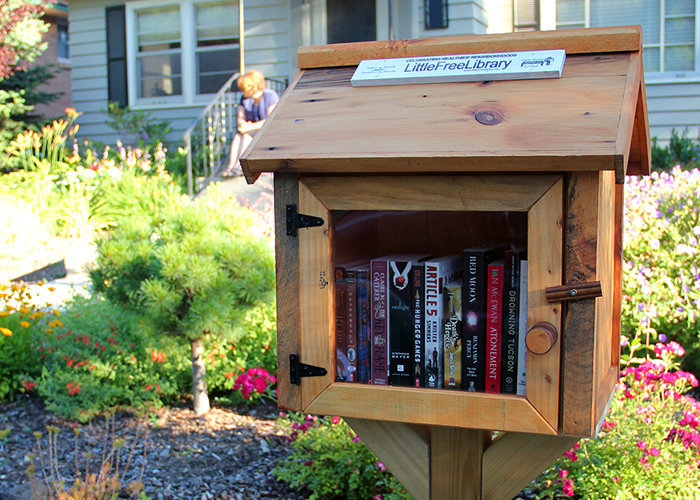 I know I’m in danger here of waxing excessively philosophical over a rotating collection of a dozen odd books, but if you’ll indulge me, here are a few lessons I’ve learned or had reiterated to me in the process of managing our Little Free Library:

We’ve all been there: you’re sixteen years old, there’s some band or book or movie that is simply the best thing ever, and all those who disagree with you must surely suffer from some fundamental defect in their aesthetic sensibilities. Eventually, though, you grow older, hopefully more mature, and become increasingly comfortable with the idea that your personal preferences are not inviolable, objective facts. They’re just your preferences. Not everyone shares them. And that’s okay.

Most people get there eventually to some degree—except for the handful of trolls doomed to roam the Internet arguing for their chosen pop-culture fandom—but it can still be a life-long effort to disambiguate between what’s objectively valuable and what’s merely personal preference.

Managing a Little Free Library has likewise required a bit of introspection. On the one hand, watching what people take and what they leave untouched has given me a good deal of insight into my neighbors’ reading preferences. On the other hand, it’s made me realize that very few people in my neighborhood share my tastes. Sure, I could fill the library with all my own obscure favorites, but few would get taken.

If I want our library to be well used, I sometimes need just to swallow my ego and add yet another James Patterson or Debbie Macomber. Not what I’d choose for myself, but that’s okay.

It doesn’t have to be.

People have a powerful need to connect with others.

Yes, not everyone has to share your tastes, but it’s also alienating to feel as though you’re alone in those preferences. Even in an age of nearly unlimited networking possibilities, people still yearn to make real-life connections with others who share their values and interests.

I suppose I didn’t necessarily need a Little Free Library to teach me this one, but I’ve definitely seen it illustrated in what people leave behind. Otherwise, I couldn’t really explain some of the oddball items that appear in our library: photocopied zines of subversive poetry, random Alcoholics Anonymous literature, academic treatises on privatization, books with such a narrow target audience that I can’t imagine anyone thinking they’re in high demand. But they leave those items nonetheless, not assuming they’ll be widely useful, I’m sure, but hoping that through some serendipitous coincidence, the one person in a thousand with whom they share that common interest might happen upon it.

I’m not sure if there’s a concrete psychological or sociological conclusion to be drawn from that, whether it says something romantic about human nature, or sad about the sense of isolation that exists within contemporary America, or a little of both. But it’s been interesting to observe nonetheless.

And sometimes we get things that just aren’t useful to anyone: yellowed magazines, decades-old computer manuals, random high-school yearbooks, single volumes from ancient encyclopedia sets, things people must be dropping off only because they can’t bear to throw them away.

I realize that culturally, we’re conditioned to think of the book as a fundamentally different kind of object than an old couch or a worn-out pair of jeans, something that demands to be preserved regardless of its present worth or utility. And that’s not necessarily a bad impulse for a historian or archivist, but if you’re neither of those, then those books are probably just clutter.

Cut off the hardcovers and recycle the innards, use the pages to kindle your fireplace in the winter months, transform the books into interesting artwork, whatever. Just don’t keep them, and don’t (always) bother donating them because, honestly, your favorite charity probably doesn’t want them either.

It’s all right. Sometimes a book is, quite literally, just dead wood.

Kids these days are still very much interested in books.

There’s no scarcity of curmudgeons today who are quick to tell you how kids don’t read anymore, how they’re too absorbed in their screens and gadgets to bother with books. I’d love to find the numbers to refute them, but it turns out that longitudinal data on children’s reading habits are a little hard to come by.

Still, if my anecdotal observations are worth anything, the children in our neighborhood show no sign of having lost interest in reading. Nearly every time I add a few new picture books scavenged from Goodwill or a Friends of the Library booksale, they disappear within the day, so fast sometimes that I’ve come to imagine feral toddlers lurking in the shrubbery, waiting for me to turn my back so they can seize their literary prizes between jam-stained paws.

In reality, I know it’s the young families in our neighborhood who claim those books, the families I often see come by when I’m out front tending the garden. And that, in the end, has been the most rewarding thing about our Little Free Library, watching how it’s actually become a destination for visitors, not just a curiosity for casual passersby. People pull up throughout the day, on bike, on foot, or by car, teens and retirees, in groups and alone. And it’s heartening to see that, even with numerous competing entertainment and information options, people still very much enjoy the simple pleasure of discovering a good book.

If you’re interested in starting your own Little Free Library, the official website has plenty of advice to get you started, including tips on how to fund and promote your library, plans for constructing your own (or the option to purchase one pre-made), and more.