Pairing drinks with books is an exercise in mood and mixology. With food, it’s a little easier. The flavors of the beverage are there to enhance and highlight the flavors of the food. And if you run into trouble there are countless books, websites and even apps advising everything from what wines pair well with shellfish to what kind of cocktails you should serve at your next barbecue.

But with literature, there’s a dizzying and delicious freedom, the pairings relying as much on intuition as analysis. References on literary pairings do exist—I consulted Hemingway and Bailey’s Bartending Guide to Great American Writers and Tequila Mockingbird: Cocktails with a Literary Twist, not to mention several Flavorwire lists—in putting together the booze-and-book suggestions you’ll find below.

But don’t feel like you can’t just wing it. Your beverage inspirations can come directly from the title of the book (Hunter S. Thompson’s The Rum Diary being an obvious example), you can opt for the author’s favorite hooch, you can have whatever the characters are having, or you can take a more ambient approach, letting the tone or theme of the story guide the tone or theme of your drinkable intoxicants.

What follows is a mix of classics (both liquid and literary), some old, some new. We’re planning on a series of future Liquid Lit pairings so if you’ve got a genre you’d like us to do, or a favorite pairing of your own, let us know in the comments!

While I was tempted to pair the Dark and Stormy with A Wrinkle in Time (which begins, “It was a dark and stormy night”), I realized this dark rum and ginger beer highball makes the perfect partner for Emily Bronte’s classic story of obsessive, highly dysfunctional love. A good Dark and Stormy will taste a little turbulent—the dark rum delivering an earthy strength lightened with the sprightly zing of the ginger beer. Oh Heathcliff, indeed. Purists will tell you that there is only one Dark ‘n’ Stormy® and that it’s made with Gosling Black Seal rum, but if you can’t find Gosling, feel free to experiment with any good dark rum. 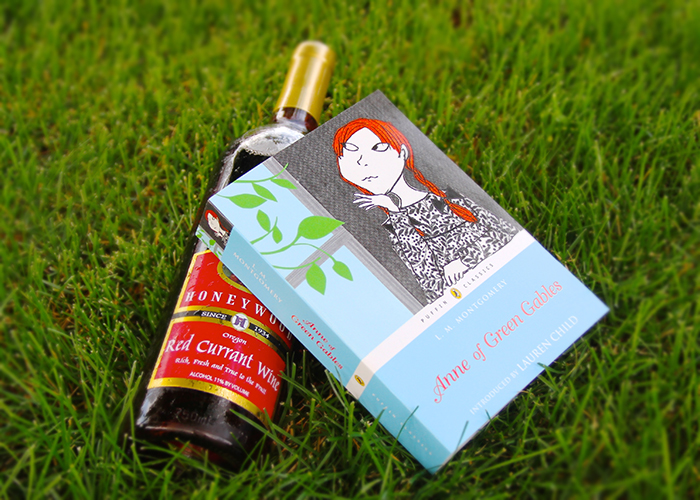 Although it might seem a bit improper to pair a beloved children’s book with alcoholic beverages, in this case the inspiration comes from the text itself: “I love bright red drinks, don’t you? They taste twice as good as any other color,” Anne says in Anne of Green Gables as she encourages her friend Diana to sample some of Marilla’s raspberry cordial. Of course it isn’t raspberry cordial, it’s red currant wine, and Diana helps herself to three large tumblers of the stuff. She goes home quite sick—Anne is accused of inebriating her friend, and Marilla learns an important lesson about proper labelling. You can try to make your own, but if you’d rather let someone else do the cooking, try Honeywood’s Red Currant wine.

Fight the evils of book burning with a little liquid fire of your own. Ray Bradbury’s 1953 novel about a dystopian America in which books are outlawed and firemen are charged with destroying contraband would seem to suggest something in the cinnamon schnapps oeuvre. However it seems wrong to subject something as sublime as this book to such icky-sweet brand name liqueurs as Hot Damn!, Aftershock, or Fireball. Opt instead for a Jalapeno Tequila Gimlet!

Any candy-themed drink would probably be a good partner for Vladimir Nabokov’s controversial 1958 novel, in which a middle-aged academic falls hard for a precocious 12-year old, but I especially like the Lemon Drop. Not just because of its confectionary connotations, but because the vodka is a nice homage to the author’s Russian heritage, the lemon juice contributes a necessary twinge of sour, and the drink’s pale yellow color is as lovely as Nabokov’s prose.

The Sazerac is the oldest known American cocktail, originating in pre-Civil War New Orleans. A heady combination of cognac, bourbon or rye, and Peychaud’s bitters served with lemon peel in an absinthe-swirled glass, the Sazerac is the perfect accompaniment to Kate Chopin’s turn of the century novel about adultery, feminine emancipation, and New Orleans society. Strong, bitter-ish, and slightly scandalous (absinthe was illegal in the U.S. from 1912 to 2007), the Sazerac comes on strong and leaves you a bit swoony.

The Old Man and the Sea—Mojito

The perpetually summery Mojito might seem an odd choice for the salt-weathered tale of an old man’s epic fight with a gigantic marlin, but when you consider where it was written (Cuba) and who it was written by (Ernest Hemingway), it all makes a lot more sense. Hemingway was reportedly quite fond of the white rum, mint, simple syrup and lime concoction, so much so that there are numerous Mojito recipes attributed to him.

As I Lay Dying—Mint Julep

Down a few too many of these and you, too, might feel as if there are 15 voices inside of you all speaking in Southern-tinged stream-of-consciousness. As I Lay Dying, in which hillbilly sensibilities meet Shakespearean prose, is a magnificent experiment in scale and narrative but it’s not an easy book. What’s needed for this pairing is an easy cocktail, and the julep delivers. Faulkner’s mint julep recipe is charmingly vague on the amount of hooch: just “whisky, 1 tsp sugar, ice, and a sprig or two of crushed mint, served in a metal cup.”

Created by colonel Francis Negus in 1737, the Negus—a wintery concoction of port wine, sugar, lemon, and boiling water—was still an appropriate social lubricant in Jane Austen’s day, but according to the Jane Austen Centre in the UK, the Negus was considered a children’s beverage by Victorian times(!) We think it’s the perfect choice for the ball at Netherfield scene—imagine Lizzy fortifying herself with one of these whilst eavesdropping on the dreadful Mr. Darcy.

The Gin Rickey: simply gin, lime, soda, and ice, was reportedly the preferred drink of F. Scott Fitzgerald and even makes an appearance in The Great Gatsby. It’s a pivotal scene where Daisy sends her husband Tom away to make something refreshing. The narrator, Nick Carraway, watches in some discomfort as Daisy breathlessly confesses her love to Gatsby, just in time for Tom to return with four of these bad boys, presumably dripping with condensation in the August heat. Mix up your own prescription of Prohibition-era cool and settle in for a repeat engagement with the quintessential Great American Novel.

The Adventures of Huckleberry Finn—Doc Holliday

The Doc Holliday would be a fun drink choice for the name alone—conjuring up visions of the Old West inspired by the infamous gunslinger/dentist. And while there are some fairly alarming recipes for this lowbrow brew, including everything from energy drinks and Dr. Pepper to Jagermeister and orange soda, we like this version, which uses fresh huckleberries, from Brooklyn bartender Stephanie Schneider. It’s just like rafting down the Mississippi, without ever having to leave your backyard.

You know what’s a great breakfast drink? Orange juice. You know what’s a great Breakfast at Tiffany’s drink? Orange juice and vodka. This pairing works not only because of the obvious breakfast theme, but also because the Screwdriver was author Truman Capote’s drink-of-choice. Aware that even in his own time this simple concoction wasn’t the showiest pony in the booze stable, Capote simply called it his “orange drink.” Whether you’re reading the book or watching the movie, the Screwdriver (or its classier cousin, the Mimosa) will see you through.

I Know Why the Caged Bird Sings—Amontillado

For most of us, sherry is that big green bottle on the kitchen counter that maybe, once, in your twenties, okay thirties, you drank at the end of an evening where your need-to-booze outstripped your supply. Big mistake, of course, and from that moment on, sherry has been strictly for cooking and nothing else. Rumor has it, however, that sherry is making a comeback, not least of which is from its surprising fans. Maya Angelou famously relied on the stuff, sipping it while writing longhand on yellow legal pads. For I Know Why the Caged Bird Sings, I’d recommend a nice Amontillado. Not only is it fun to say (and conjures up shades of Poe’s famous cask), but the nutty, aged richness of the wine complements the strength and wisdom of Angelou’s stunning 1969 autobiography.