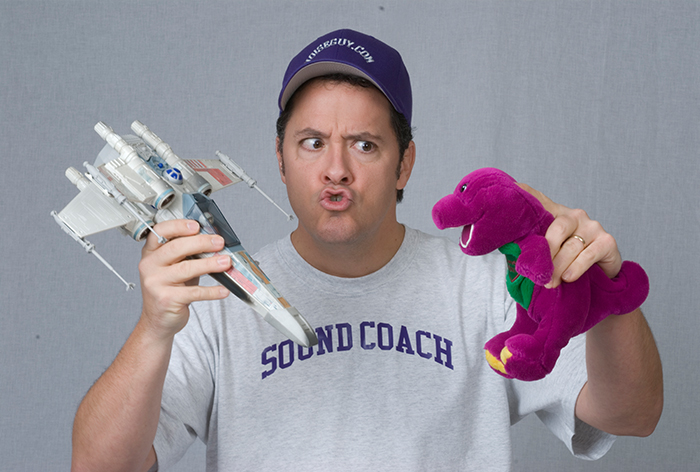 Is that a fly buzzing around your head? Did a door just creak open? Who left the faucet on to drip, drip, drip?

The culprit may be Noiseguy Charlie Williams, vocal sound impressionist extraordinaire. Lucky for us, he is performing his show, “Sound Coach: A Reading Relay Readathon,” at all District libraries, starting August 1 as part of our 2016 Summer Programs.

Always curious about talented performers, I asked Charlie some questions about his craft. And ever since, I’ve been making noises and whistling around the house (my daughter keeps telling me to stop!). Well, Charlie has all of the vocal talent I lack. And hopefully, just like me, you’ll be inspired  by the Noiseguy to get a little noisy!

How and when did you discover your particular skill set as a Noiseguy?

I discovered I had a flair for performing with comic vocal sound effects in 9th grade when the social director at school asked me to do a showcase of “those funny noises you make.” I went to a private high school in St. Louis, Missouri. Up to that point, I only had experience with parent/teacher conferences and discussions about being noisy in class.

Having a microphone on a stage in the auditorium was a good way to teach me how to use my mouth skills for good and not for trouble. I loved playing with amplified sound, showing my friends and peers something I was good at. My sound showcase got a nice round of applause, which is far better than getting a detention! I enjoyed that positive attention, which helped with my shyness.

What is it about performing that keeps you doing it?

Like George Carlin said, “The point of being a class clown is ‘Hey! Dig Me!’”

I keep doing funny sound imitations because I like showing kids that you can make a career out of doing what you do best. Which is a good message.

Is noise making an innate talent or can it be learned?

I think noise imitation is a balance of both genetics and environmental learning. Nature and Nurture! I always remember having a special talent for imitation, but that is basically how most kids learn communication—by imitation. I learned how to demonstrate the imitations at the school lunchroom table, which is a good place to test your material. I needed that environment to blossom.

A parrot can imitate sounds very well, but I’ve noticed that parrots display their individual personalities in their vocalizations. I have an African Grey parrot that laughs when someone falls down on TV. She likes to chime in with the flock. She can mimic bird calls too, but her personality is influenced by the communication style of humans. The same is true with kids, some outgoing children play loudly, whereas introspective children tend to play quietly and more low-key.

How do you get audiences to participate? What’s your secret?

Audiences generally want to have a good time, so being interactive is a great way to start the ball rolling. I think using sound effects in speech, reading, or pantomime is a technique used in communication. It’s not something you hear often. Onomatopoeia is participatory. It is an interesting, funny, and instructive way to get your point across. We all have a voice, and onomatopoeia is like the icing on the cake.

The basic secret is that everyone has a noise imitation that they are good at. You just need to give them permission to show off! For example, whisper the words “petty-cope” over and over, quickly. It is a galloping horse. Go ahead, try it!

What did your teachers, parents, and family think of your abilities? Did they ever get you in trouble?

Most of the time, my parents, family, and teachers thought my noisy ability was neat. They would request certain sounds for their own amusement, but they also knew to reign me back in because once I got started, I would keep on going!

My mom would have me re-enact scenes from The Wizard of Oz for visitors. I can still remember singing the “King of the Forest” like the Cowardly Lion in that movie. My grandparents applauded politely.

However, as a student in school, I found that sound imitations were fantastic prank opportunities, so yes, I got in trouble. I tried to imitate the school bell to dismiss the class early. Bbbbbbbbbbbring!

Like most kids, I found that making startling sounds in a quiet atmosphere produces a funny reaction. I also discovered that there are plenty of boundaries when it comes to pranks!

How do you go about learning or creating a new noise?

Study, practice, and experimentation. I keep a noise journal! I write a lot of story ideas and vignettes. If I think a sound would be a good fit in a particular story, I set out to practice and polish it. For example, I am working on an instructional bit about whistling.

Whistling is the hardest noise to learn. Most kids take a long time to get it the way they like it. I studied people who were good at whistling. My parents would whistle while they worked and there are many styles of whistlers out there—the chipper whistler, the flutter whistler, the bird caller, the taxi whistler, the teeth whistler. There is even a nose whistle!

I wanted to show something different, and thought it would be cool to do a dual whistle–two whistles at once! I practice it every chance I get, since practice is the best way to master a skill. My dual whistle still needs work, but I am making headway. I experiment by showing my friends the dual whistle. If I can impress them, I know I am about ready to launch it onstage.

What advice would you give an aspiring Noiseguy or gal?

Look up onomatopoeia and start naming your own sounds. Onomatopoeia in Greek means “name making.” It is how we “say” or “write” a sound effect. We give sound a name. Dontcha love that? Secondly, SCRIBBLE! And keep a journal!

When I was doing comedy at clubs, a well-respected comedian friend of mine said, “Write your ideas down! Record them, however silly or goofy they may seem. You gotta keep notes on yourself!” Keeping a journal of your favorite sounds and where you heard them and why you thought they were funny is like building your own life-lesson library! Oh and record the date you wrote the entries too!

What book changed your life or view of the world and why?

I used to read MAD Magazine in middle school and my favorite cartoonist was Don Martin. He wrote a book called The MAD Adventures of Captain Klutz, an adventure story that was a parody of all the superhero comics. He also was an onomatopoetic master. His sound effect flourishes went directly to my brain. I loved his style and was amazed he could get away with gross humor in those cartoons. It truly inspired me.

Don Martin taught me that as long as people are laughing, they will accept your words. Humor makes ideas digestible. Captain Klutz was very funny. I learned that content was just as important as style. You can infuse your personality into your writing as long as you are true to yourself.

I began writing my own comic books after that. I created a cartoon version of War of the Worlds. Then I drew The Odyssey. I even did a cartoon version of Hamlet in high school. My classmates said it was more informative and entertaining than the Cliffs Notes! Don Martin’s book set me on the path that I am still exploring today. SPLORCH! Oops, watch your step!

Charlie “the Noiseguy” Williams is a vocal sound impressionist, illustrator, and author who shows how to use onomatopoeia to enhance reading, writing, and storytelling. He has been making noise in schools and libraries since he was a kid. He’s worked as a DJ, emcee, cartoonist, kids comedian, children’s librarian, and dancing air-balloon sky-guy in front of a car dealership. He published his first book, Flush! An Ode to Toilets, in 2006. He is now the vocal-folly effect artist for Sound Safari Theater, an audio company that produces children’s albums and educational programs.