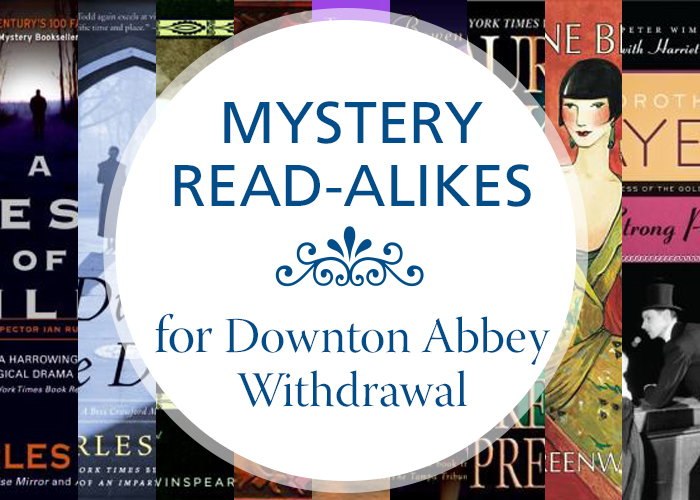 I confess that I am obsessed with Downton Abbey. Beyond just the beautiful setting and clothes, which I admit I adore, there’s something about the post WWI era that just captures my imagination. It’s a period of time in which the world seemed to wait with bated breath for the next major shift. Social mores were changing and with them the sharp class divisions. Agrarian economies shifted to modern manufacturing, and opportunities both were created and disappeared. With so much scope for drama and human stories, it’s no wonder that Downton Abbey is so popular.

Fortunately, there are several great mystery series set in the same time period that will tide me over (and maybe you too) when the season ends on March 1.

Charles Todd, a mother and son writing duo, pens two different series set in this time period. A Test of Wills is the first in the series featuring Inspector Ian Rutledge, a Scotland Yard inspector who survived WWI but secretly still suffers from shell shock. In A Duty to the Dead, readers are introduced to Bess Crawford, a nurse serving on the frontlines of World War I.

In Maisie Dobbs by Jacqueline Winspear, we meet Maisie as young 13 year old maid in a Belgravia mansion. Maisie becomes a nurse on the frontlines and then opens an inquiry agency of her own after the war. There are currently 11 novels featuring Maisie.

Moving from England to India in the last days Raj, we find war hero and Scotland Yard Inspector Joe Sandilands in The Last Kashmiri Rose by Barbara Cleverly. Sandilands is consulting with the local authorities on modern investigative techniques. It’s a fascinating view of the last days of the British Empire. Cleverly has another series that starts with The Tomb of Zeus, set in Greece during the 1920s, about a young archaeologist-turned-detective, Laetitia Talbot.

Rhys Bowen takes a lighter tone in Her Royal Spyness, which introduces Lady Victoria Georgiana Charlotte Eugenie, the impoverished daughter of a Duke who has been reduced to finding her own way in the world and taking the occasional job.

Laurie R. King writes one of my all-time favorites, The Mary Russell/Sherlock Holmes series, starting with The Beekeeper’s Apprentice. In the first novel, set just before the WWI, we meet 15-year-old Mary Russell, who becomes apprentice to the great detective himself.

Any list of great mystery series set in the 1920s must include the great Dorothy L. Sayers. Although not her first novel, I would point readers toward Strong Poison as the place to enter Lord Peter Wimsey’s world. The BBC filmed “A Dorothy Sayers Mystery: Strong Poison” which aired in the late 1980s on Masterpiece Mystery, and not only is it fabulous, it’s also available on DVD.

I would be remiss if I didn’t also add the film Gosford Park, a fantastic period murder mystery with the upstairs and downstairs views that we love from Downton Abbey. You’ll recognize the work of Downton Creator Julian Fellowes, as he wrote the screenplay.

This is just a sampling of titles that I would suggest to help you continue to immerse yourself in the era of Downton Abbey. What would you recommend to me?