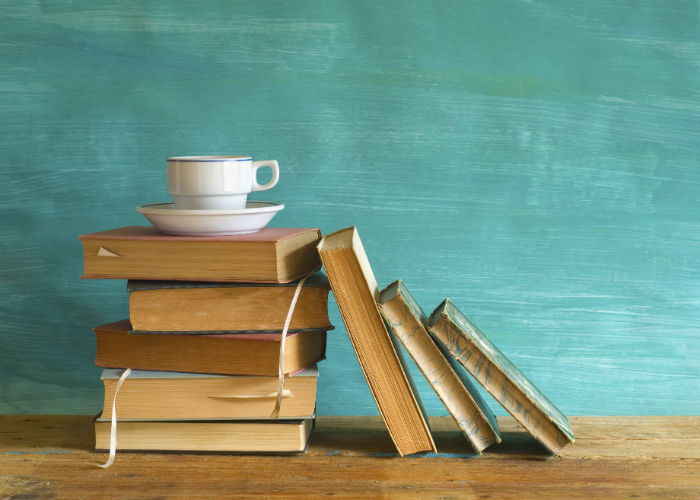 In our house, the “coffee table” is wherever our cat has no interest in lounging. Be that my desk or the entertainment center, our coffee table space is always on the move, usually one step ahead of the cat. As is true with many of my coworkers, the contents of my reading list are made of current reads, wish to reads, good intentioned never reads, and even a couple films. As a way of introducing myself as the newest member of the blog team, here is the current state of my pile:

The Secret History of Wonder Woman

This book I am actually currently reading and was recently republished in paperback and is one of our “Books to Go”. Lepore explores the little known origins of Wonder Woman, her links to the suffrage movement in the early 1900s, and the character’s complicated relationship with feminism. More than just a book about comic book characters, this fascinating historical account doesn’t require you to tell the invisible jet from the X-Jet.

Switching gears for some fiction, The Buried Giant is Ishiguro’s first book in a decade, the last being Remains of the Day. A Pre-Saxon, fantasy tinged Britain is the setting for this emotionally resonate and grounded story, which Ishiguro is known for. As a fan of fantasy, I am always on the lookout for different takes on the genre and the setting alone earned this book a spot on my coffee table.

Sci-fi is one of my favorite genres. I find it most engaging when dealing with massive questions of human existence; this film certainly delivers. Oscar Isaac plays an overly masculine tech genius who secludes himself in a remote mountain wilderness (think Mark Zuckerberg meets Kurtz of Heart of Darkness). Here he develops the next great true and sentient artificial intelligence. He summons a low level employee, Caleb (played by Domhnall Gleeson), to administer the Turing Test to confirm what he believes, that Ava is indistinguishable from humans. As the film progresses it becomes clear that Ava is not the only one being evaluated.

I know, I know, how do I have time to rewatch a film when such a formidable stack of books is waiting for me. With a cast like this though, and all of the rather heavy themes of my other selections, this lighthearted comedy is just the break I need. A renegade DJ’s broadcasting rock ‘n roll from a boat off the English coast in 1966 also lends itself to an excellent soundtrack, which includes The Kinks, David Bowie, and Jeff Beck. While only very loosely based on true events, it is definitely a ton of fun!