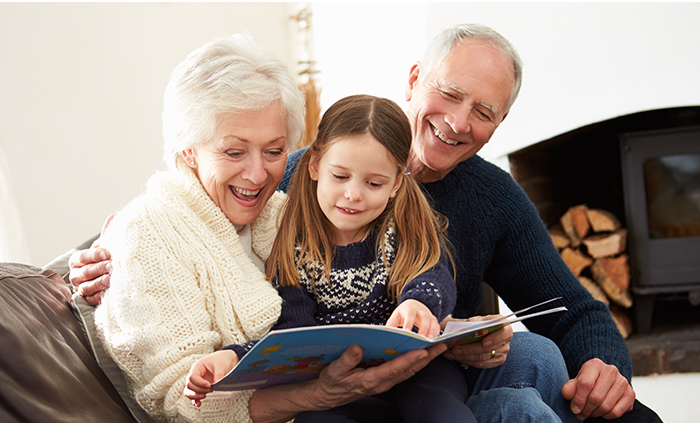 Winter is just not my thing. I’m too clumsy to ski. It’s too cold to enjoy being outside. And I get too dispirited by the short days to remember to take my vitamin D. I pretty much just grit my teeth, put on my stupid tights (and gloves, and boots, and hat, and scarf), and count the days until March.

But while looking at the newest crop of winter-themed picture books, I remembered that I didn’t always feel this way, and that as a child, winter had actually been my favorite season. I liked wearing a thousand layers and drinking hot cocoa and staying outside until the skin on my legs burned and the way sometimes a January sunset would turn the snow orange and blue and pink.

If you’re looking for a way to celebrate—rather than just endure—this longest and coldest season, I highly recommend spending some time with your favorite small person and a stack of these picture books. Be forewarned: hot cocoa is a must! 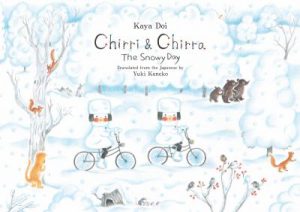 Chirri and Chirra, the Snowy Day by Kaya Doi, translated from Japanese by Yuki Kaneko

If you haven’t yet met these bicycle-riding, nature-loving, rosy-cheeked girls from Japan, you owe yourself the calming pleasure of their company. Dismantling the concept that all good stories need an essential conflict, Chirri and Chirra ride from one charming adventure to another—in this case visiting a great hall filled with friendly animals, soaking in a hot spring, and watching the Northern Lights from an igloo with their new bear friends. This third book in the Chirri and Chirra series from Enchanted Lion is pure magic. 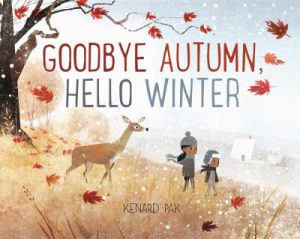 A brother and sister navigate a brown field surrounded by trees, noticing all the signs of late fall: the rasping of fallen leaves, the activity of animals, and the earlier start to evenings. As the countryside falls away to the structures of town, the colors become wintrier: blues and grays and whites. As they walk, they call out to various creatures and inanimate objects, each of which respond with a perspective on the colder days (the pine trees remark that their needles shiver “while you sleep” and birds indicate it’s time to head “far, far south.”) The quietness of the colors works in tandem with the sparseness of the text—the feeling is one of an early evening winter hush. 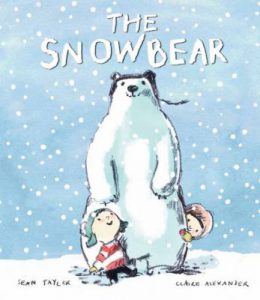 The Snowbear by Sean Taylor

Siblings Iggy and Martine head out to play in the snow, building a magnificent snowman that looks like nothing so much as a cheery polar bear. With that accomplished, they then turn their attention to the steep, slippery hill their mother warned them about. In no time at all, they’re careening down it on an out-of-control sled—and soon find that getting back up the hill is an even more difficult proposition. When a hungry wolf threatens their progress, their snowbear saves the day and leaves behind a wonderful mystery in the process. 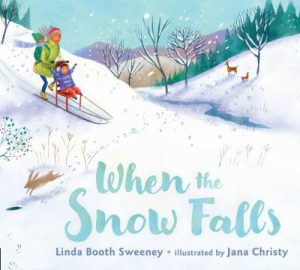 When the Snow Falls by Linda Booth Sweeney

A close-knit family takes advantage of a rare snow day in this happy, multi-generational adventure. When grandma spends the night at the home of her two curly haired grandchildren, they’re all surprised to wake up to lots and lots of snow. With school cancelled and their parents deep into the chores of a busy farm, the children and their grandmother set out for grandma’s house on a homemade chair sled. At the end of the journey there are snow angels, warm soup, and best of all, grandpa! Linda Booth Sweeney’s text is short and impactful, and the illustrations capture the singular joys of hard work and family commitment, no matter what the weather. 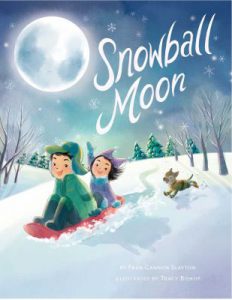 Power outages are typically no fun for adults (especially those of us who remember the wind storm of 2015), but for kids they can be a time of non-routine magic. In Snowball Moon, two kids whose house has lost power find themselves getting bundled up for an evening of sledding and snowball fights. With the bright moon up above, there’s fun to be had for everyone—even the sheep and woodland creatures of their eventual dreamtime imaginations. 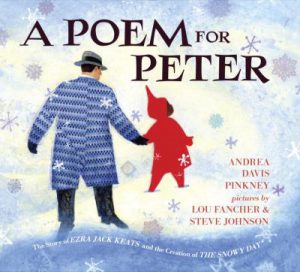 A Poem for Peter: The Story of Ezra Jack Keats and the Creation of The Snowy Day by Andrea Davis Pinkney

Although The Snowy Day is one of the first picture books in America to depict an African-American main character, its author was actually the son of Polish immigrants who changed his name in order to sound less Jewish. Renowned author Andrea Davis Pinkney describes in free verse how some images of a little boy in Life magazine eventually inspired Keats to write and illustrate the story of Peter, that “brown-sugar boy in a blanket of white,” while also delving into the book’s significance in children’s literature. This is a picture book biography at its best. 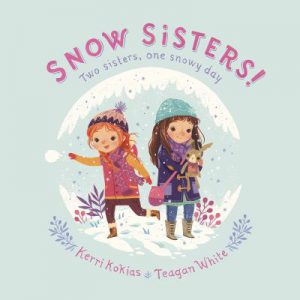 Two sisters, one with exuberant red hair and the other with tidy, dark brown hair, each find their own way to enjoy a snowy day. While the red-haired sister rushes outside to throw snowballs and track animals, the dark-haired sister stays inside with cocoa and a blanket, gradually relinquishing both in order to bake cookies and cut out paper snowflakes. Midway through the story, the girls trade places, and it’s fascinating to see how their personalities inform whatever activity is at hand. While the dark-haired sister uses her outside time to build a snow castle, her red-headed sibling makes a giant mess in the kitchen. The overall feeling is one of respect for individual differences, with an appreciation for siblings who enjoy independent fun. 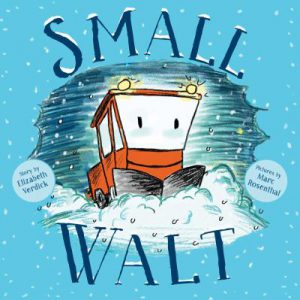 Anyone who has ever been picked last for a team will be able to identify with Walt, the smallest snowplow on the lot and, therefore, the least likely to be chosen when a big blizzard hits. But when Walt is selected by his new driver Gus and put through a four-point inspection, he gets his chance to prove that he can plow and salt with the best of them. With illustrations reminiscent of Virginia Lee Burton’s Katy and the Big Snow and Mike Mulligan and His Steam Shovel, Small Walt is a fantastic read-aloud for the trucks-and-trains set. 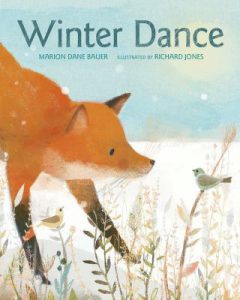 When a curious young fox feels the first winter snowflakes on his nose, he’s not sure what to do. A butterfly advises him to wrap himself up into a cocoon, a squirrel tells him it’s time to gather every acorn in sight, and a bear suggests he “tuck his growls away” under the roots of a toppled balsam tree for the winter. Nothing seems quite right until he meets another fox who shows him how snow is for frolicking. Based on the behavior of North American foxes, Winter Dance is a nice blend of fact and story and a capable introduction to wintertime animal behaviors.