Q&A with Cecil The Magician 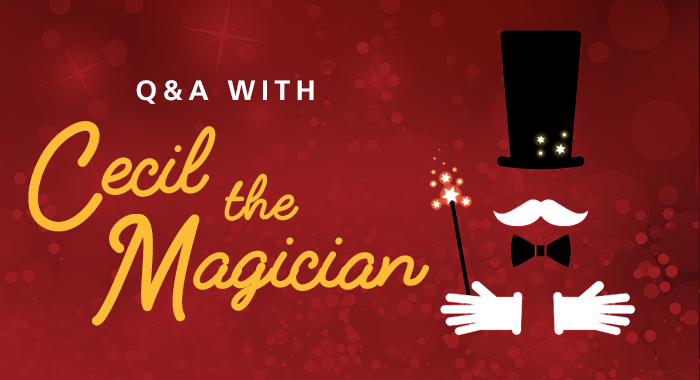 Next week, Cecil’s Magic performs “Race to the Finish Line!“, a magical adventure that reveals the true story of the tortoise and the hare, at all District libraries as part of our 2016 Summer Programs.

In anticipation of amazing illusions and a magical story, I decided to peek behind the curtain and ask Cecil a few questions. Does he reveal any secrets? Keep reading to find out!

How did you become a magician? What attracted you to performing magic?

When I was about seven years old, I read an advertisement in the back of a comic book that said, “Learn to be a Magician. Send a dollar.” I sent in a dollar, and Magician Mark Wilson sent me a program on how to perform magic. Mark Wilson was the first magician to perform on TV. After that I was hooked.

I love getting people to believe in the wonder of Magic and the possibilities.

What was it like the first time you performed in front of a live audience?

It was great. My first tricks were for my family, who were very supportive. The more I performed, the better reactions I got from the audience.

What’s your secret to audience participation?

The secret is getting the audience to realize that we are here to have fun. I look for someone who is smiling and looking attentive. To me, magic is a way to escape from reality and make the impossible possible. I think magic is truly amazing in that you can entertain a crowd and leaving them wondering how you did it.

Will you ever reveal how you do the illusions?

I do reveal how to do them from time to time. I teach a magic class at some of the local libraries. I also hold a Magic Camp in summer for kids.

Who and what inspires you? Is there a formula for creating a new magic show?

Mark Wilson was the first person to get me started in magic, so he was my first inspiration. Some of the other magicians who help inspire me today are Rick Thomas and David Davinci (David Womach). David has helped me build several illusions and has guided me to be a better performer. When creating a new show, he has helped me figure out what the people might want to see and how to build it.

What advice would you give an aspiring magician?

Videos are great, but BOOKS are where the secrets are hidden. Get a book on magic and read it over and over. Then you will need to practice, practice, practice. You will need a place to be horrible before you get better, where you can hone your craft (somewhere that’s not a public show). You need what we call flight time! Pilots must practice flying for hours before they can get their license and fly others around. It is the same for magicians—lots of practice before you get up in front of a public audience.

Of Mice and Men by John Steinbeck is a favorite. The Five Essential Elements: A Simplified Road to Success by Matt Fore (my coach) is a great book for anyone looking to achieve their dreams. 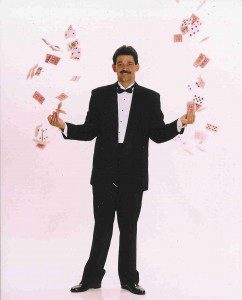 Cecil Lewis has been thrilling audiences in the Northwest for the past 25 years with his unique style of magic. From fairs and festivals to corporate events, his shows are suitable for all ages. Cecil is considered one of the best family entertainers in the business. You can learn more at www.cecilsmagic.com.