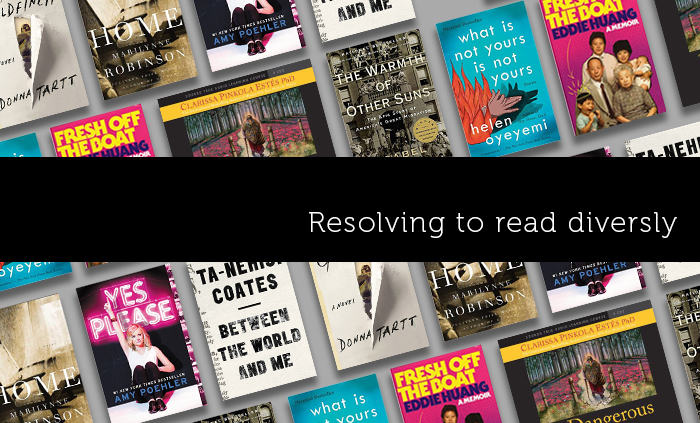 In late 2016, a friend challenged everyone she knew, including me, to name one Indigenous American author, other than Sherman Alexie, off the top of their heads.

As an employee of the library and an English literature major with a passion for diverse representation, I felt I should have answered quickly and with at least a few great authors. But I found myself racking my brain, unable to come up with a single answer without help.

The exercise made me start thinking about my familiarity with other marginalized groups: women, LGBTQ people, black Americans, and Asian Americans. How many of these authors could I name without a Google search? I could name a few, but it was not impressive. When I started naming white male writers, the list was endless—I actually stopped before I ran out of names.

The disparity between my author lists partly arises out of my education. The academic canon (the written works studied by a majority of educational institutions) I was taught is very male centric, and overwhelmingly white—think Shakespeare, Poe, Twain, Dickens, Fitzgerald, and Hemingway. While academic institutions are starting to acknowledge that those who chose the books in the canon were also mostly white and male, reassessing and diversifying a new canon for the whole of academia is daunting, to say the least, and near impossible when considering all of the excellent literature that’s out there.

Perhaps because men of Caucasian descent are so prevalent in our foundational education, they’re prevalent in our media as well. A 2014 study found that only about 29% of speaking characters in American film were women, meaning that for every two men with speaking roles, only one woman has a speaking part. The results imply that our media values men’s voices—and subsequently their stories, viewpoints, and experiences—at least twice as much. These statistics get even more daunting when you start looking at speaking roles for people of color (of any gender). You can learn more at the Geena Davis Institute on Gender in Media.

But it’s unfair to blame media and academia entirely. My lack of familiarity with a more diverse group of authors also lies in my own choices.

Although I felt like I had been pretty ambitious in choosing a diverse list of authors, when I looked back, I found that my reading choices for authors were barely better than the statistics of representation found in film industry study, especially when it came to nonfiction.

About half of the books I had been reading were by male authors of Caucasian descent. The books were good reads, but they were not a diverse reflection of voices that I could be experiencing, nor were they even the voices I might most relate to. I felt a need to balance my reading list, so I decided to make a resolution for 2017. I could read any author who is not male and white. The authors could be alive, deceased, American, Australian, novelist, memoirist, and so on—for one year, just so I could experience other voices, exclusively.

I was unsure at first if I could do it. The answer was a resounding yes.

I did fall behind on some book conversations—Ernest Cline’s Ready Player One waited on my reading list until January 2018. But mostly, I found a huge sea of books by women and people of color to read, some that I had been meaning to read for a while and hadn’t.

Now that 2018 is here, I find that the writers I grew fond of in 2017 have made my reading list grow larger, and that’s good!

My reading list is opened back up to all authors, and I plan to more deliberately follow the big conversations around women and people of color going forward. With that plan, I hope my reading list will begin to more accurately reflect the many and varied voices America has to offer.

I encourage you and everyone to read more diversely in 2018, even if for only one month, or every other month, or for two months…three…a year! Consider narrowing your author pool as well—to only LGBTQ women of color, for example. Whoever you choose to read, I hope you discover new voices you might never have heard otherwise and discover new ways to look at people and the world.

For a place to start your path to reading diversely, I offer you some of my favorite fiction and nonfiction that I discovered in 2017. 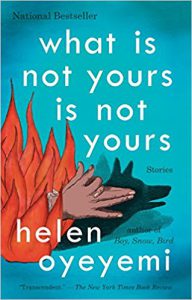 These short stories are for the reader who enjoys a bit of magic and mystery. Helen Oyeyemi masters intrigue not simply through twists and turns, (though the first tale, “Books and Roses” certainly contains both), but through a vivid romantic tone worthy of Coleridge and an air of mystery that manages to walk the tightrope between giving the reader enough to whet her appetite and keeping her asking for more. Oyeyemi’s stories introduce the reader to clandestine Catalonian thief lovers, ghostly puppetry schools, and strange old houses full of haunted keys. Her stories are rich, complex, dark, sweet, funny, and pensive—like a strange and lovely dream from which you wake rested and satisfied, but never quite able to shake. 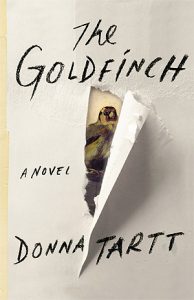 The Goldfinch by Donna Tartt

Donna Tartt’s Pulitzer winning The Goldfinch is a vivid heist novel, furnished with rich characters, heady intrigue, and heart-wrenching tragedy. The son of an artist and a swindler, Theodore Decker recounts the innocent, desperate moment that launched a life of crime, and the subsequent, increasingly less innocent actions that followed thereafter. Characters range from a loveable antique furniture dealer, to an already world-weary Russian teen, to a sweet and surprisingly grounded young woman whose musical career was derailed when her eardrum was permanently damaged. Characters circle back to each other with a fated frequency, and the opulent Goldfinch painting seems to haunt every scene. Tartt’s attention to detail and deep dive into the antique world is an ode both to beauty and to the beholder. 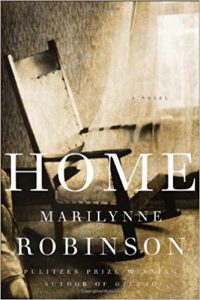 The sequel to Gilead, Marilynne Robinson’s Home comes from the perspective of a pastor’s adult daughter who has recently moved back home with her ailing father. The story relates the same events as those told in Gilead but from such a vastly different point of view. Readers who are new to these characters will not be confused, and readers who are familiar with the trilogy will only find Robinson’s exploration of the struggle for human connection made more poignant. Questions of the metaphysical are considered with a delicate, thoughtful hand, and the same hand presents characters whom the reader will want to hug and to shake by the shoulders, sometimes at the same time. Glory Boughton is painfully relatable as she staggers between desperate admiration of her eldest brother and the emotional burden of caring for the mental and physical well-being of both him and their father. 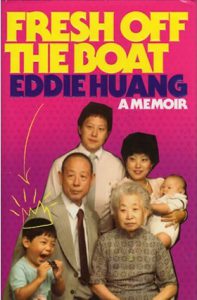 Fresh Off the Boat: A Memoir by Eddie Huang

The inspiration for the TV series of the same title, Eddie Huang’s Fresh Off the Boat is a fun, sometimes irreverent memoir exploring his experience growing up as a second-generation Asian American. Sharp and rebellious, young Eddie objects to the personality assigned to him by the “model minority” stereotype, identifying more with an African-American community who he feels has faced racism head-on. Huang discusses the impossibility of defining a minority-American experience when half the difficulty of such an experience lies in the presumptive definition of individuals by their race. Crafted with an unapologetic tone, an endearing love of food, and an insightful gaze into human individuality, Fresh Off the Boat offers a quick read that’s almost certain to leave the reader with something to think about. And of course, the former Ultimate Recipe Showdown contestant includes a delicious, customizable recipe for one of his favorite foods. 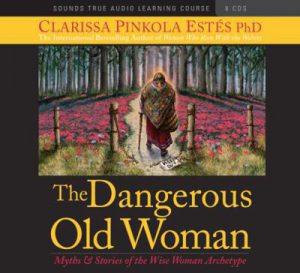 The Dangerous Old Woman: Myths and Stories of the Wise Woman Archetype by Clarissa Pinkola Estés

Blurbed as a work of literary criticism, The Dangerous Old Woman only exists in audiobook format and is so much more than dry academic analysis. A post-trauma recovery specialist, Estés opens by speaking to the audience as if they had joined her on a retreat for psychological healing. She then proceeds to discuss five fairytales from various cultures, each of which contains a dangerous old woman. Estés draws on her doctorate in Jungian psychology, her personal experience, and the wisdom of a large, pajama-and-sandal-wearing aunt to analyze the fairytales with impressive depth. Before each analysis, she reads the story to the audience. Her animated voice and gentle acknowledgement of the audience make this experience feel as if she’s gathered the listeners at her feet by the fire. The Dangerous Old Woman is insightful, spirit-oriented, well-studied, and inviting. 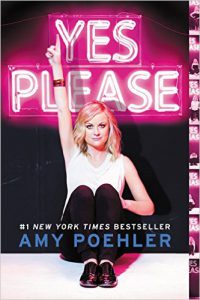 Many people are familiar with the old improv directive to say “yes, and…” when on-stage. It’s a mantra meant for building an effective scene. It is also often used as life, career, or relationship advice—find a way to say yes, and then build on your agreement by adding your own wisdom, creativity, or skills. Amy Poehler—a favorite public figure of mine for her earnestness and enthusiasm—instead says, yes please, a reflection on her readiness to seize any opportunity to make things together. She tromps through tale after tale of escapade and endeavor with fellow actors, writers, and friends, often calling upon their help directly in the writing of her book. But perhaps the most enticing part of the memoir, for me, was the way that Amy didn’t hide her hard work. Amy bares all her hard-fought battles for the reader to see and, perhaps, identify with. Yes Please feels like an invitation to achieve your dreams and improve yourself, despite the sometimes terrifying difficulties on the way. The memoir leaves the reader thinking, “Amy believes in me. Maybe I believe in me, too.” 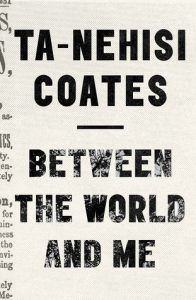 Between the World and Me by Ta-Nahesi Coates

This short work, published in 2015, is a heartfelt letter from Coates to his teenage son, discussing what it means to be black in an America that seems never quite able to stifle white supremacy. Through stories of his own childhood, Coates attempts to prepare his son for the violence he and his loved ones will undoubtedly face in their lives. Using his experience as evidence, Coates theorizes on what shapes the worldview of American blacks and what shapes that of, as he says, “those who think they are white.” Frank and philosophical, Between the World and Me is an excellent introduction to Coates’ work and life, as well as a book any American teenager or adult could benefit from reading to better understand race in America. 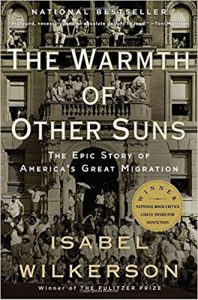 The Warmth of Other Suns: The Epic Story of America’s Great Migration by Isabel Wilkerson

In The Warmth of Other Suns, Wilkerson takes a close look at the post-slavery migration of black southerners into northern and western United States. After interviewing hundreds of migrants, Wilkerson masterfully weaves the narratives of three of her interviewees: Ida Mae Brandon Gladney, George Swanson Starling, and Dr. Robert Joseph Pershing Foster. Wilkerson does not shy from telling the gritty racism faced by these individuals and others whom she interviewed, and she also is sure to tell of their triumphant successes. Wilkerson takes the reader through American classism and racism, the inherent injustices of Chicago’s ghettoization and how it came about, the dangers and possibilities of capitalism as seen through worker strikes in the Florida orange groves, and the frivolity and opportunity present in the lives of those who push through to be among among the LA elite. The Warmth of Other Suns is not an easy read, but it is perhaps one of the most important books of American historical nonfiction.

EVEN MORE TO READ

There are so many great books to explore, so here are even more to read.