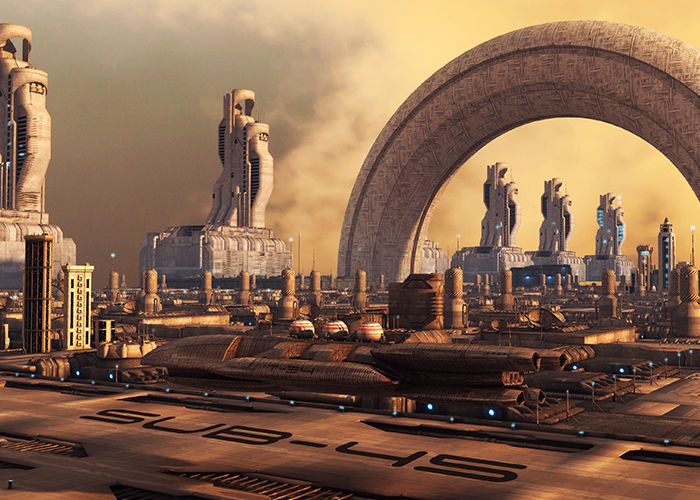 I rarely had the attention span as a teen to tackle full-length novels. I read quite a few role-playing game manuals, comics, and various permutations of Choose Your Own Adventure books, but not a lot of actual novels. The Hobbit, Neuromancer, and several books from the Dragonlance franchise were among the few I can actually remember having finished. However, I loved short stories, specifically those of the science fiction and fantasy (SFF) variety. I can still recall when I first discovered a collection of H.P. Lovecraft stories at the public library and a copy of Amazing Stories at the local newsstand.

I didn’t keep up with short stories much after high school, which apparently was just as well. The SFF magazines publishing short fiction had already been at the tail end of a slow decline when I first discovered them; the years that followed weren’t much kinder, with a lot of print publications closing up shop.

So I hadn’t realized until recently that the SFF short story has seen something of a digital renaissance in recent years, with a number of online magazines publishing new short fiction, much of it from a younger crop of promising new authors. And the great part is that a lot of these magazines, thanks in large part to crowdfunding campaigns and “freemium” subscription models, have been able to make much of their content available for free to online readers. 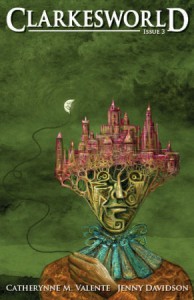 Among my favorites, the multiple award-winning magazine Clarkesworld features SFF fiction and related non-fiction, as well as downloadable audio podcast readings. They offer their content online for free (although if you want to support the magazine financially, there are some perks for doing so), and feature a mix of both well-known and up-and-coming writers.

I’ve been particularly impressed with how the selection of stories on Clarkesworld have illustrated just how diverse the SFF scene has become in recent years, with a lot of great fiction from women and LGBT writers and people of color. For example, some of my favorite Clarkesworld stories from this year include “Cat Pictures Please” by Naomi Kritzer, “When Your Child Strays From God” by Sam J. Miller, and “Cassandra” by Ken Liu.

Clarkesworld also ran a Kickstarter campaign last year to fund the translation of Chinese sci-fi into English, which was successful enough that they’ll be able to expand into translating SFF stories from other languages. For two recent examples, check out “Ether” by Chinese writer Zhang Ran or “An Evolutionary Myth” by Korean writer Bo-Young Kim. 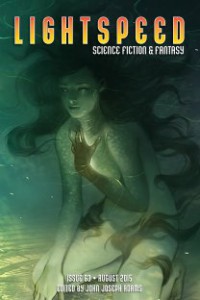 Lightspeed Magazine is another of my favorite online magazines. It was started in 2010 by John Joseph Adams, whom you may recognize from his many anthologies, including the recent Press Start to Play, a collection of video-game related fiction co-edited with Robopocalypse author Daniel H. Wilson, and the forthcoming Loosed Upon the World, a collection of climate-change related fiction.

There’s some exclusive content for Lightspeed subscribers, but most of the stories are available for free. Some of my favorites this year have included the cyberpunk novelette “And You Shall Know Her By the Trail of Dead” by Brooke Bolander, “The Ministry of the Eye” by Dale Bailey, and “The Universe, Sung in Stars” by Kat Howard. 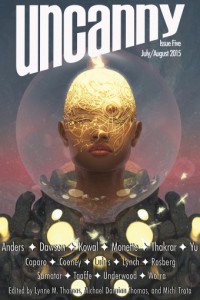 Uncanny Magazine is a newcomer on the scene, but has already succeeded in highlighting some impressive fiction and artwork. Thanks to a successful Kickstarter project in 2014, they’ve been able to make all of their content available for free, although paid subscribers still get content a bit earlier and in eBook-friendly formats. There are similar rewards for supporters of the Kickstarter project currently underway to fund their second year of publication.

I’m admittedly biased toward stories about libraries, so I quite liked Elizabeth Bear’s “In Libres” and Ellen Klages’ “In the House of the Seven Librarians.” Also worth reading, Sam J. Miller’s alternative history of the Stonewall Riots, Hao Jingfang’s story of a dystopian Beijing, or Mary Robinette Kowal’s tale of a cursed kingdom whose mad king is doomed to only one hour of lucidity each day.

Apart from online magazines, Tor.com, an SFF community website from publisher Macmillan, has been regularly making short fiction available for free on their website as well (although downloadable eBook versions are also available for cheap from the publisher’s main site). Some of my favorites have included David D. Levine’s military sci-fi tale “Damage”, Nino Cipri’s time travel story “The Shape of My Name”, and Usman Malik’s contemporary fantasy novella “The Pauper Prince and the Eucalyptus Jinn“.

Still want more? Check out Apex Magazine, Beneath Ceaseless Skies, Lackington’s, or Shimmer for even more free, short stories, and feel welcome to recommend anything you particularly like in the comments below.