The Educational Merits of Minecraft

At the North Spokane Library, where I mainly work, it’s rare that anyone has to wait more than ten or twenty minutes for a free computer, if they have to wait at all. But sometimes our computers do get full, and I’ve more than once heard adult members grumble about the kids taking up the computers to play video games.

My diplomatic, default explanation is that everyone gets their ninety minutes a day, and we don’t tell people how to spend that time.

But something inside me wants to stick up for those kids, rant about all the things I myself learned at their age from playing video games. Sure, there were plenty of games with obvious educational agendas back in my day—whether it was learning about world capitals in Carmen Sandiego, continental drift in SimEarth, or the perils of poor sanitation in Oregon Trail—but I’m not necessarily talking about educational games per se.

I mean simply that the desire to play games in general motivated me to learn about computers, far more than I would have otherwise learned if word processors and productivity suites had been the only draw.

The irony is that those same adults will marvel at how intuitively “kids these days” can use computers, even from a very young age. However, there’s no computer gene, no random mutation in this generation, which makes kids more adept at computers than their predecessors. They learned to use computers the same way one learns anything: by practice. And I can guarantee that practice didn’t happen by crafting résumés and designing spreadsheets.

Most of them got there by playing games.

In the United States, 97% of children and adolescents, in fact, spend at least an hour a day playing video games. The ubiquity of video game play among kids has generated a lot of handwringing over the potential negative effects, but comparatively little focus on the positive side of video games. A review article published earlier this year in the journal American Psychologist attempted to rectify that imbalance by reviewing the current research on the cognitive, motivational, emotional, and social benefits of video game use.

Among the other benefits identified in the article, the authors describe how video games have been demonstrated to quickly improve players’ spatial skills, particularly important because those same skills have been shown to predict future achievement in science, technology, engineering, and mathematics.

Other studies have suggested that video game use is positively correlated with creativity; that some types of video games may actually lead to enhanced problem solving skills and improved academic performance; and that video game players may be more likely than non-gamers to persist in solving difficult problems.

Which brings me, in a roundabout way, to Minecraft.

The popularity of Minecraft, by far one of the more popular games today, can be a little difficult to understand at first glance. Whereas contemporary video games trend increasingly toward an almost photorealistic look, Minecraft’s blocky, pixelated graphics look rather crude by comparison. And in contrast to the breathless attention and split-second decisions required by most action games, Minecraft tends to move at a leisurely, almost meditative pace.

Yes, there’s a survival mode in which your boxy avatar can battle skeletons and zombies and other foes while gathering important resources, but that’s merely optional and largely tangential to the game’s main function, which is to serve as a sort of virtual Lego set, in which player’s creations are limited only by their ingenuity.

Remember those spatial skills I mentioned earlier, that have been proven to predict future success in STEM fields? Creating anything in Minecraft requires spatial intelligence in spades. I realized the first time I tinkered with Minecraft myself that crafting something as simple as a staircase tower required some fairly demanding three-dimensional thinking.

I can’t even imagine crafting something like this gothic revival cathedral, built with over 300,000 virtual blocks by some thirty Minecraft players working in collaboration, not just because of the spatial intelligence required, but also the organizational skills needed to coordinate such a colossal effort.

And constructing static buildings in Minecraft is only scratching the surface. With redstone, a fictional substance that can be mined in Minecraft, players can create items that function somewhat analogously to real-life electronic components. Those components can be used to create more advanced structures like logic gates that can be further combined to create complicated in-game devices.

One YouTube channel, for example, demonstrates a functioning 8-bit computer that computes the Fibonacci sequence or a machine that generates random mazes based on Prim’s algorithm, both of which were created in the game from basic components.

I, on the other hand, managed to create an automatic door. Go me. 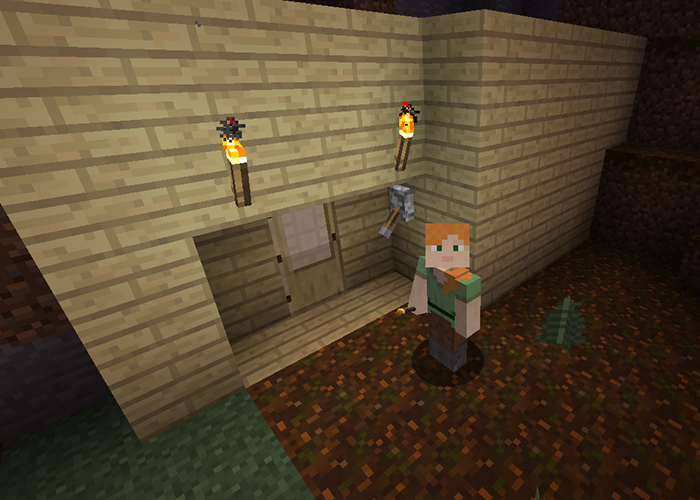 And Minecraft has the potential to develop other, less technical skills as well. With note blocks, for example, blocks that play a predetermined note when powered by redstone, players can recreate songs or craft their own musical compositions, all the while learning about scales, octaves, and other musical concepts. For a couple of extreme examples (created with the help of a third-party utility called Note Block Studio), check out this redstone machine that plays Für Elise or this one that plays Pharrell Williams’ “Happy.”

Even some venerable institutions have begun to jump on board, recognizing the potential educational value of Minecraft. More recently, the University of Texas launched Polycraft World, a Minecraft mod that introduces concepts of polymer chemistry and metallurgy into the game, and London’s Tate Modern announced their Tate Worlds project, in which works of art from their collection are reimagined as Minecraft worlds that users can download and explore.

It’s understandable, though, if parents still have some concerns.

Admittedly, Minecraft is rather addicting, and it’s easy for children (and adults) to end up spending an inordinate amount of time playing the game to the exclusion of other pursuits, However, there are some great resources out there for parents if they’d like to know a little more about the game and how to set appropriate guidelines for their children. The website Mine Mum, in particular, has some great FAQs and other resources to help dispel some of the mystery around Minecraft and aid parents in taking a balanced, informed approach toward the game.